HALA’ULA, Hawaii: The North Kohala community gathered on Kauhola Point this weekend, in celebration of the preservation of the 27 acres of undeveloped coastal land in Hala’ula. On Saturday, attendees had the option of driving a new, hand cleared trail to the point, where food and music under a large, white tent awaited. The scene […] 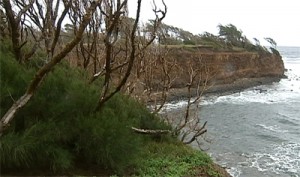 HALA’ULA, Hawaii: The North Kohala community gathered on Kauhola Point this weekend, in celebration of the preservation of the 27 acres of undeveloped coastal land in Hala’ula.

On Saturday, attendees had the option of driving a new, hand cleared trail to the point, where food and music under a large, white tent awaited.

The scene was nearly identical to another gathering in North Kohala, held a year ago at Lapakahi… many of the faces were the same, attending the ho’olaulea in celebration of the preservation of land parcels in Kaiholena, Pao’o, and Lapakahi – 180 acres in all – where public access is now protected, forever more, in this legendary, natural area.

After all, as we were reminded just this month during the celebration of King Kamehameha Day, North Kohala is intertwined with the history of Hawaii’s unifying ruler.

During that event in 2011, some folks were not content to rest… some were selling T-Shirts and raising awareness in the hopes of preserving for another endangered parcel in Hala’ula.

Kauhola Point was the focus of a year long coordinated effort to raise funds and awareness in the hope of protecting the land from development and keeping it open as a resource for the community. This 7 minute film uploaded to Vimeo one year ago by Christina Au entitled “For Kauhola Point” served at the time as “a plea to help save the beautiful Kauhola Point. It is historically and culturally valuable and is cherished by the Kohala Community.”

After a long campaign to preserve the land, the community nonprofit Maika‘i Kamakani ‘O Kohala, Inc. purchased the property for $1.3 million from Chad & Jenifer Davis, who chose to work with The Trust for Public Land as an alternative to development.

The purchase was made possible through a public-private partnership of the state Legacy Land Conservation Program under the State Department of Land and Natural Resources, The Trust for Public Land, and a whole host of local, community organizations.

A specific resource management plan will be formed through a stewardship planning process that will include the current active users. At Saturday’s celebration, the community already had a chance to provide input.

There are also heiau remnants to be cared for, and coastal erosion is always a concern… the Kauhola Point Lighthouse was recently demolished by the Coast Guard because there was no way to escape an eventual fall over the receeding cliffs…. a new lighthouse now stands, farther from the cliffs than the old lighthouse… one solution to the erosion is replanting native ground cover of naupaka and hala trees, which participants did on Saturday during this ceremony.

The organization also hopes to research and revive Kamehameha I’s taro patches, and plant other organic produce to provide a healthy sustainable food source for Kohala, and encourages further community unity and collaboration.

Fred Keakaokalani Cachola, a prominent member of the Kohala community, thanked the crowd on behalf of the aina.