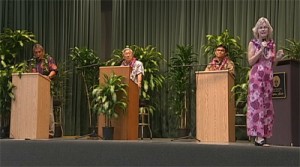 In the video above, we present a short summary of the event, which airs on Na Leo o Hawaii Community Television.

We will also present the complete forum on this same page in the section, below. All the candidate’s answers will be presented in their entirety.

“Why are you running for mayor”

Incumbent Kenoi says he is happy where he is, while Yagong says there is only so much you can do in his council chair position. Meanwhile, surprise candidate and former mayor Harry Kim says there is a “discontent” in how governments work to solve problems, and says he was asked to run “because of a different style of management.”

“What will be your top three priorities if elected mayor?”

“What is the solution to the solid waste problem in Hilo?”

With the mandated closure of the Hilo Landfill in five to eight years, Yagong says we should expand the current landfill, while Kenoi and Kim both oppose the expansion and push for incineration. Kenoi and Kim agree that expansion is not as feasible as Yagong proposes it is.

Forum moderator Sherry Bracken follows up on statements made earlier in the forum. What would Harry Kim do to curb homelessness? How would Mayor Kenoi help small business? How would Yagong encourage more recycling?

How do you wiegh the benefits of business regulation vs. the economic harm it could do? What is the role that county government should play in economic development? Unemployment? Tourism in Hilo? Also asked: “Will you serve as mayor for the entire four year term?”

Dominic Yagong says he would have paid into the gasB45 retirement fund. Harry Kim says he probably would have done things differently, but doesnt get specific. Mayor Kenoi says he is proud of the budget his administration has put together. On the second go around, things get a little heated over opposing gasb45 philosophies.

A question on alternative energy leads to questions on geothermal. Yagong and Kim both urge caution in exploring geothermal resources, although all three candidates say that they support at least some use of the resource.

All three candidates talk about the philosophies by which they intend to govern. Kenoi talks about his focus on safe families and creating puuhonua for the children. Kim says he doenst like confrontation, and when it comes to doing a job, do it by law, do it right, and do it the best that you can. Yagong discusses his plantation perspective, cultivated in Haina on the Hamakua Coast.

With the disparity between East Hawaii and West Hawaii county tax contributions, moderator Sherry Bracken asks if there an issue as far as how Hawaii County proprty taxes are assessed?

Candidates talk about the challenges Hawaii Island faces when it comes to healthcare. Doctor shortages and fiscal shortfalls are a threat to the stability of service on the island.

Their finest accomplishments while in office

Candidates are asked what their proudest achievements are after their years of public service. Yagong names his work on the Hamakua lands, preventing their sale and putting them towards community use. Mayor Kenoi says he is most proud of his administrations four balanced budgets. Harry Kim names his work as mayor on the Kohanaiki shoreline.

Candidates give their closing statements at the end of the forum. Mayor Kenoi and Harry Kim attempt to set the record straight on their relationship. Kenoi worked for Harry under the Kim administration, and was groomed to take the reigns as mayor when Mayor Kim reached his term limit. Many were surprised by Kim’s decision to run for mayor this year.