WAIMEA, Hawaii: The Mana Award – an award recognizing those who inspire and educate – will again be given out during the Hawaii Horse Expo in Waimea, and this year’s recipient will be Franz “Dick” Solmssen. 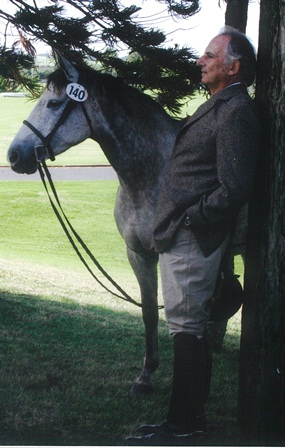 The third Hawaii Island Humane Society Horse Rescue Fund Mana Award will be presented to Franz “Dick” Solmssen during Hawaii Horse Expo 2012 which is being held August 11 and 12 at the Paniolo Heritage Center at Pukalani Stables in Waimea.

The Mana Award will be presented on Sunday, August 12 following the traditional blessing of horses which begins at 10:00 a.m.

HIHS Executive Director Donna Whitaker and Dr. Lisa Wood of Veterinary Associates, the award sponsor, will present Solmssen the award which is named after an abandoned mare named Mana who spent the final months of her life in the care of HIHS’s Waimea Shelter.

The award recognizes a Hawaii Island individual who has inspired and educated the community about horses so others are not abandoned.

Solmssen was recruited out of Trinity College in Connecticut in 1957. In those days, HPA was known as Hawaii Episcopal Academy. It was for boys only and was located in the center of Waimea where St. James church now stands.

In 1958, Solmssen started the horse program with borrowed horses. In the late 1960’s he purchased eight unbroken horses from Parker Ranch with money he had raised. From this group of eight, Solmssen selected a talented foundation mare named Amaryllis. Her lineage was from “Humuula Boy” who had been bred by Parker Ranch Humuula foreman Willie Kaniho. Humuula Boy was an impressive steel-footed stud who was the product of a Percheron mare and a Mauna Kea mustang. All 22 horses in HPA’s horse program today trace back to Amaryllis.

A man of few words, Solmssen is known to communicate effectively with his students through nods, small gestures and a searing gaze should they go astray. Despite a gruff exterior, he and his family often hosted students for dinner and would entertain everyone with his classical guitar skills.

“As a down-to-earth, straight-forward, father figure, Dick has filled a void for many homesick boarding students,” expressed Dr. Wood. “Through his HPA horse program students learn horsemanship but they also experience firsthand the great affection that develops between a horse and rider. For having dedicated more than 50 years to this far-reaching educational program we are pleased to honor Dick with this award.”

Proceeds from Hawaii Island Humane Society’s 5th Annual Hawaii Horse Expo benefit HIHS’s Horse Rescue Fund and the Paniolo Preservation Society. Internationally renowned equine experts will share their knowledge in a variety of horse-related disciplines during two days of clinics and demonstrations. Hawaii Horse Expo presents a rare and unique opportunity for intimate, hands-on learning from some of the best individuals in a variety of equine specialties.