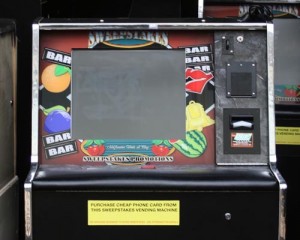 Police say this is one of 33 suspected illegal gambling machines that were seized at three Hilo locations Friday.

Police say they used undercover officers and tips from the public to corroborate the suspected gambling activities.

Three employees were also arrested, one from each establishment, and were released peddling further investigation.

From the Hawaii Police Department:

“The Hawaiʻi Police Department thanks the public for providing tips and information that assisted police with the disruption of these suspected illegal gambling operations,” said Lieutenant Burt Shimabukuro from the Area I Vice Section.

Vice detectives are continuing the investigation.

The exterior and interior photos of the establishment were taken by blogger Damon Tucker in 2009, who at the time “wondered how they could be legal.”