Video by David Corrigan | Voice of Stephanie Salazar HILO, Hawaii: To the cheers of the crowd, Robert Petricci tore apart the new administrative rules for Hawaii’s Public Land Development Corporation. That pretty much sums up how everyone felt about the newly created agency. Testifiers expressed outrage on Monday night. One by one, residents lashed […] 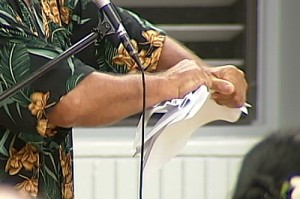 HILO, Hawaii: To the cheers of the crowd, Robert Petricci tore apart the new administrative rules for Hawaii’s Public Land Development Corporation. That pretty much sums up how everyone felt about the newly created agency.

Testifiers expressed outrage on Monday night. One by one, residents lashed out during a hearing held at the Waiakea High School cafeteria in Hilo.

This was the first in a statewide series of public meetings on the new rules for the PLDC. And it looks like things are off to a rocky start. Many cringed at the apparent broad powers given to the new state agency.

Passed through the 2011 state legislature with astounding speed but little public fanfare, Act 55 created the Public Land Development Corporation, and was hailed by Governor Neil Abercrombie as a cornerstone of his New Day in Hawaii platform. Speaking before a room of supporters during this Democratic Party convention in Kona that year, the governor explained just how important the new agency will be in terms revitalizing the state’s ailing parks and boat harbors.

The agency will develop state lands and generate revenues for the Department of Land and Natural Resources. Through public-private partnerships, the corporation aims to attract private companies as joint partners in development opportunities.

But as time went on, the public began to take a closer look at the agency, and began to grow concerned with what they found in the fine print.

Moani Keala Akaka, a former OHA trustee, was one of the first to raise a warning…

By the time the PLDC’s chief supporter, Senator Donovan Dela Cruz, made his presentation to the Hawaii County Council later that year …. using the Mauna Kea State Park as one example … skepticism was growing. Now, a more informed public is beginning to mobilize.

Former Campbell Estate land manager Lloyd Haraguchi has been named executive director of the corporation… he tried to calm the crowd before the meeting began in Hilo on Monday.

Others, like Sierra club member Cory Harden, ran down the numerous development rights given to the corporation.

Many testifiers expressed deep concern over how the PLDC will enable further geothermal development on Hawaii Island.

Towards the end of the evening, testimony grew desperate, as folks whose lives are intertwined with Hawaii’s public lands and resources spoke out against the new corporation.

Hearings will continue on all islands over the next few weeks. The final hearing will be held on August 31 on Kaua’i.