Video by David Corrigan | Voice of Stephanie Salazar CAPTAIN COOK, Hawaii: The annual Breadfruit Festival went bananas on Saturday at the Amy B.H. Greenwell Ethnobotanical Garden in Captain Cook. The one time staple of the Hawaiian food diet known as ‘Ulu was the fruit of focus during the day of demonstrations, music and cultural […] 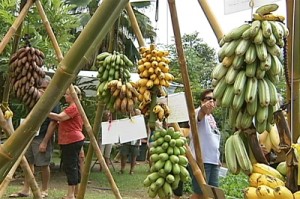 Bananas hang out at Breadfruit Fest

The one time staple of the Hawaiian food diet known as ‘Ulu was the fruit of focus during the day of demonstrations, music and cultural presentations.

The event was put together by the Hawaii Homegrown Food Network, the Breadfruit Institute of the National Tropical Botanical Garden and Amy B.H. Greenwell Ethnobotanical Garden presented the event. Andrea Dean has been involved since the beginning.

This year, the breadfruit’s Pacific-wide companion, mai’a, joined in the fun. Bananas were in great abundance on the grounds of the South Kona festival.

In March, Big Island Video News followed these breadfruit fanatics out into South Kona’s agricultural country-side to harvest some of the ripe ‘ulu from these giant trees; fruit that would otherwise go to waste.

A good opportunity to see the proper way to pick the fruit, with the help of Craig Elevitch.

Much of this was collected to feed the hungry on Hawaii Island, but some of it was also prepared for the festival, months in advance, under the guidance of Aunty Shirley Kauhaihao. Unfortunately, we learned this weekend that much of the harvest was lost due to a freezer malfunction. However, organizers were able to come up with plenty to stock the festival with plenty of ‘ulu to use in cooking demonstrations.

Local celebrity chef Sam Choy was on hand, as were the students of Kua O Ka Lā charter school, who – along with Mariposa Blanco – put together their award winning ‘ulu poke.

A short ways away, ‘ulu poi pounding was on display.

The day was also marked by inspirational performances by Kumu Auli‘i Mitchell and Kahikina’s Nahenahe ‘Ohana with Auntie Irma DiCenzo.

All in an effort to spread knowledge and awareness about the potential importance of ‘ulu to island sustainability.