Video by David Corrigan | Voice of Stephanie Salazar KONA, Hawaii: Its the final resting place for America’s honored veterans… Some who even gave the ultimate sacrifice on the field of battle… The West Hawaii Veterans’ Cemetery is situated on an arid stretch of lava overlooking the Kona coastline below. It was once Hawaiian dry land […] 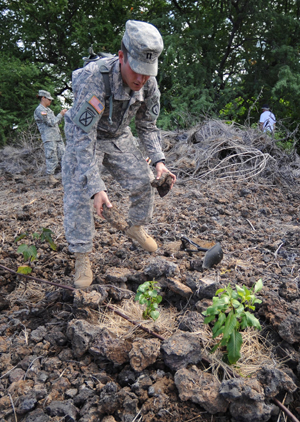 Soldiers from the Oahu-based 1st Battalion 21st Infantry join students from UH and other volunteers to plant native plants.

The West Hawaii Veterans’ Cemetery is situated on an arid stretch of lava overlooking the Kona coastline below. It was once Hawaiian dry land forest, denuded of trees and foliage when hungry goats were introduced to the island.

A community efforts is now underway to return the land surrounding the honored cemetery to its former glory.

Dr. Richard Stevens, a UH Center West Hawaii Lecturer in Humanities – who also serves as the reforestation project coordinator for the cemetery – guided us along a small trail up the hill to see first hand the changes taking place.

The native Hawaiian flora being planted are already taking hold, especially beneath this large kiawe tree, where it already looks like a different world.

Stevens has been getting lots of help… on Saturday, soldiers from the Oahu-based 1st Battalion 21st Infantry joined students from UH and other volunteers to plant native plants.

The Soldiers have been training at Pōhakuloa Training Area for about the last two weeks. Every unit’s training rotation to the Big Island usually includes a community service project.

And thats not the only boost being provided…

This large greenhouse is currently being renovated, thanks to the West Hawaii Veterans’ Cemetery Development and Expansion Association, the Home Depot Foundation and the Kailua-Kona Home Depot store.

The Home Depot Foundation has awarded over $6,000 for the effort.

The greenhouse has been out of commission for years, but once the restoration is complete, it will aid the reforestation by growing the native plant seedlings that will be used in the effort.

According to Dr. Stevens, we are living in a special time in regards to our environment.