Video by David Corrigan | Voice of Stephanie Salazar PAPAIKOU, Hawaii: Over 40 people testified at the Hawaii County Council’s special hearing in Papa’ikou on Wednesday. The majority spoke in favor of a resolution to initiate eminent domain proceedings to acquire the Papaikou Mill Road and beach access for public use. The trail is currently […] 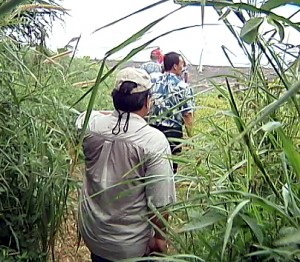 PAPAIKOU, Hawaii: Over 40 people testified at the Hawaii County Council’s special hearing in Papa’ikou on Wednesday. The majority spoke in favor of a resolution to initiate eminent domain proceedings to acquire the Papaikou Mill Road and beach access for public use. The trail is currently owned by James Waugh and Charlene Prickett.

The issue has been festering for years. Many in the community say the path – which has been improved and fenced off by its owners, with access granted during certain hours – has been the traditional trail to the popular Papaikou Mill for generations. The owners say the trail being used was improved by them, and that they have every right to restrict access as they see fit. As a result, tensions between the owners and the community have risen over the last few years.

The Lyman family hs been at the forefront of the effort, and the family spoke passionately at the hearing.

That same evening, the land owners had a chance to make their case to the community and the council, and propose an alternative path. The proposal didn’t go over too well with most of the testifiers.

Before the public hearing was held, the county council undertook a site visit to the Mill to see firsthand the trail leading to the popular beach.

Charlene seemed excited – under the circumstances – to show off the finer points of the property. The visit was also a chance for councilmembers to ask questions.

The council’s route to the beach was a little different. The group entered the property through an easement on a road owned by Steve Shropshire – as the public would under Waugh’s alternative plan.

The new trail would offer surfers a good look at the break before heading down to the beach, Waugh explained from the overlook fronting his home.

It all looked like a sound proposal, until Steve Shropshire spoke up, saying he had never even gotten a call about this plan, which involves the use of the road he owns.

The council eventually connected with the trail that is in use today, and began the descent to the beach. The path, weathered by constant erosion, led the group to the stream below. Councilmembers made their way through a jungle of tall grass, to the beach that has captured the hearts of generations in Papaikou.

After the visit, Waugh tried to explain his efforts – and his intentions – to the crowd before the hearing began. Charlene Prickett also apologized to the public for the ongoing problems over the access trail.

When public testimony began, the land owners did have their supporters. But they were few compared to he masses who spoke up during the hearing.

Long time fishermen and recreational users of the ocean spoke in favor of the resolution to take the trail for public use. Some spoke on the issue of the right to beach access in Hawaii.

Others described the degenerating relationship between the land owners and the nearby residents.

The matter will once again be taken up by the Council Finance committee next week, where it will be given either a positive or negative recommendation through a vote of the council committee, before moving on to the full council.