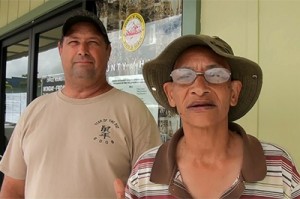 Hilo, Hawaii: Puna residents RJ Hampton and Robert Petricci filed a complaint on Monday with the Hawaii County Board Of Ethics against Puna councilman Fred Blas claiming Blas violated Section 2-83 (3) of the county code of ethics: fair treatment which states, “All persons shall be treated in a courteous, fair, impartial manner.”

Hampton and Petricci are asking the Hawaii County Board of Ethics for a determination of the facts. The complaint alleges during questioning of the county clerk on August 20th of this year Councilman Blas appears to manufacture claims relating to the election and the ability of voters in district 4 to cast their ballots. Hampton and Petricci want Blas to clarify and explain:

On August 20, 2012 councilman Blas stated on the record that he was 200 feet from the polling “poll”. Mr. Blas appears to claim the poll did not open on time at 7:00am. Councilman Blas clearly says that he saw cars turned away “like a drive through” Mr. Blas also says when he asked, “whats going on down there?” He was told by voters that the poll was closed, they could not vote, and they did know what time they could vote. Mr. Blas goes on to say, “There was really a lot of voters that did not vote “down there”.

Hampton and Petricci are questioning those statements. they contend the poll in district 4, opened on time, all voters were able to vote, and there was no drive through of cars that were turned away. So where was Mr. Blas that morning and what exactly is he talking about.

We believe Mr. Blas needs to explain these public accusations made from his seat on the council to the public and the council.

Based on the election report that says the district 4 poll opened on time, we believe all voters were able to vote and none were turned away that morning because of a late opening at Mr. Blas’s polling station. It is our belief having been at the hearing and seeing Mr. Blas say these things and further reviewing the video of the statements he made to make sure, that councilman Fred Blas publicly lied, and or perjured himself, from his council seat, in an attempt to deceive the public and the other council members.

See video on you tube http://www.youtube.com/watch?v=tB11z32DpJU.

We are asking for a determination of the facts and a ruling on Mr Blas’s conduct. We are also asking for an opinion on the ethics of publicly lying or committing perjury to council members and the public.

The complaint ask the board of ethics to compel Mr Blas to explain his public accusations and comments, and to produce proof voters at his polling station were unable to vote or that the polling station in district 4 did not open on time.

If for some reason this kind of intentional deception is exempt from the ethics code and or rules governing the council, it will in our opinion will call into question the very credibility of the process, the purpose of the ethic board, and or the council rules.