By David Corrigan KA’U, Hawaii: The environmental assessment for a plan to manage the 61,641 acre Ka’u Forest Reserve has been completed, and the Department of Land and Natural Resources foresees “no significant negative effect on the environment”. The EA lays out the general purposes of the plan: Develop management actions for general and specific […]

KA’U, Hawaii: The environmental assessment for a plan to manage the 61,641 acre Ka’u Forest Reserve has been completed, and the Department of Land and Natural Resources foresees “no significant negative effect on the environment”.

The EA lays out the general purposes of the plan:

According to the EA, the DLNR Division of Forestry and Wildlife decided to select for implementation Alternative B, which involves the upper, central portion of the Reserve. See the figure 2-1b, taken from the EA, below. 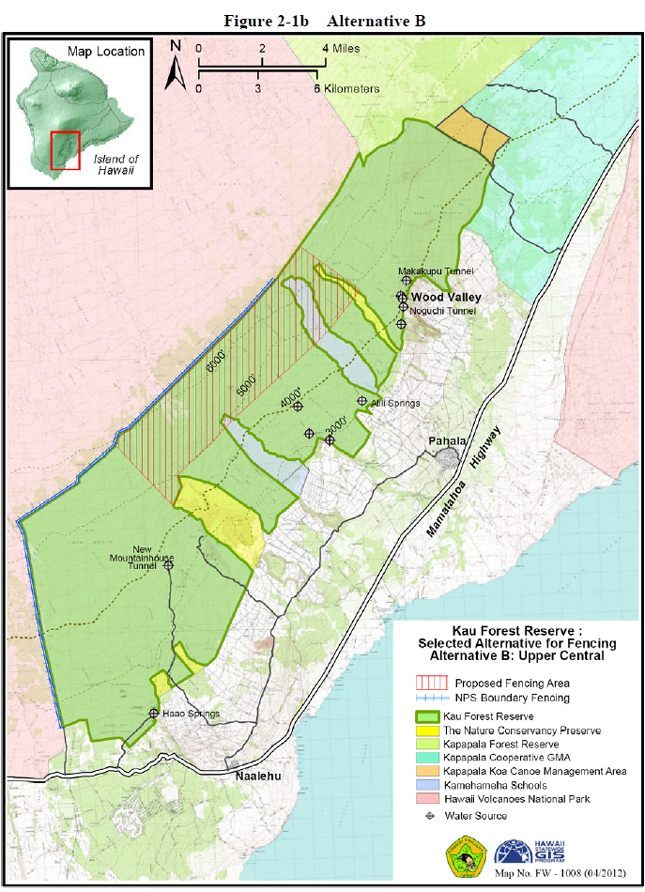 Alternative B was preferred, according to the draft EA for the plan, because alternate B has:

The plan created a firestorm of controversy among hunters in the region. After many months of consultation, a heated public meeting held in June in Naalehu raised issue with the plan to fence off 12,000 acres in order to better manage the resource. Big Island Video News was there to film.

We realize that the Department of Land and Natural Resources (DLNR) Deputy Director, DOFAW staff, and its consultants were in “hostile territory” at the meeting … The lack of trust for DLNR’s ability to create workable game management plans and forest management plans was a common complaint. What DOFAW would do for the hunters in the unfenced 49,641 acres may have been on the display panels, but it was not said or said often enough.

I tentatively support DOFAW’s preliminary choice of Alternative B and the Draft Ka‘ū Forest Reserve Management Plan included in the EA. An oral discussion with the community on how and why this area was determined would have been greatly appreciated. It’s unfortunate that the passage of this management plan is so contentious. The published EA clearly shows the biological, cultural and scientific loss if no action is taken, yet no one can deny the storm of community and hunter resistance.

In the comments section of the EA, the tone was different. The majority of the written letters were in support of the fencing, and the removal of ungulates from the reserve.

“Our publicly available forest resource is being used to raise livestock on 96% of State Lands for the common good,” wrote Shalan Crysdale, a resident of Wai’ohinu. “Building a fence and placing one percent of our most inaccessible forest under the kind of management that sets the natural resources foremost above livestock is truly asking next to nothing.”

“There is a tipping point at which ungulate damage and accompanying weeds are so pervasive in native forest that the watershed cannot be restored,” wrote Pat Conant, an entomologist with the Hawaii Department of Agriculture. “That fact will permanently impact all the people of Ka’u in myriad ways. The aina would no longer provide water for future crops nor protect the ocean from silt.”

However, Conant questioned the certain hunting restrictions. “Since suppression of wild ungulates by hunting in unfenced watersheds is a good thing, why are there bag limits in Ka’u?” he asked. “Shouldn’t hunters be able to take all they want to supplement their food supply? Bag limits serve no useful purpose to anyone, and DOCARE officers that enforce them would be better used protecting precious marine resources that really need management, and which also feed many people in Ka’u.”

The Amercian Bird Conservancy wanted to see a larger fenced area. “The plan dismissed fencing all of the Reserve’s high altitude forest due to financial costs,” wrote Chris Farmer – the Science Coordinator for Reintroduction of Hawaiian Birds at the Kilauea Field Station. “However the potential biological and cultural losses from not protecting the forest at this critical juncture are huge, and these non-financial costs need to be more fully and appropriately considered.”

Roger Imoto, the acting administrator for the DLNR’s Divsion of Forestry and Wildlife, acknowledged that if Alternative D is not implemented, environmental degradation is likely to continue. “However,” Imoto responded, “fencing and removing ungulates from the roughly 12,000 acres within the rugged and heavily vegetated preferred alternative area is a very large and expensive undertaking over the the frame of the Plan.”

The plan to reintroduce the endangered ‘Alala into the reserve got huge support in the written comments.

“The Ka’u Forest Reserve is currently our best chance of restoring the ‘Alala, or Hawaiian crow, into the wild,” wrote Jess Newton, a Fish a Wildlife biologist from Honolulu, echoing the thoughts of numerous wildlife experts and conservationists.

But one hunter who opposes the Ka’u Reserve Plan delved deeper into the ‘Alala release program.

“Retired Wildlife Biologist Miles Nakahara stated to Karen Rosa, U.S. Fish and Wildlife Services, dated December 3, 1999,” wrote John Griffiths, Jr. of Mountain View “that no action should be taken until some success in the ‘Alala release program at the present site is accomplished.”

“Mr. Nakahara’s suggestion is now moot,” responded DLNR, “as there are no longer any wild crows at McCandles Ranch or any other location.”

“The reserve was chosen as a potential reintroduction site for ‘Alala because it historically supported ‘Alala and conatins the appropriate forest type and size.”

But some thought that an EA was not enough. “… we feel an EA is inadequate and an EIS is strongly recommended at this time,” wrote Palikapu Dedman, president of the Pele Defense Fund. “We will not accept your EA proposal for the fencing of public lands in Ka’u or Statewide.”