KEAUHOU, Hawaii – The fifth annual Mango Festival was held in Keauhou on Saturday on the Hawaii Lawn of the Sheraton Kona Resort & Spa at Keauhou Bay. This year the event was dubbed “Mangoes & Mantas” (manta rays are Keauhou’s iconic local sea dwellers). The festival featured displays on agricultural sustainability and marine conservation. […]

KEAUHOU, Hawaii – The fifth annual Mango Festival was held in Keauhou on Saturday on the Hawaii Lawn of the Sheraton Kona Resort & Spa at Keauhou Bay.

The event has been the passion of Dr Randyl Rupar since the beginning. We spoke to Randyl – along with Miss Kona Coffee 2013, Guinevere Davenport – during the event. Rupar told us about how this year’s event included a panel discussion that underlined this year’s festival theme, “Keep the Culture in Agriculture While Protecting Our Marine Environment.” Panelists include Dr. Hector Valenzuela, vegetable crop extension specialist with University of Hawaii at Manoa, and the discussion was timely. Hawaii County is considering a bill that would prohibit genetically modified organisms – GMOs – from being grown on the island. 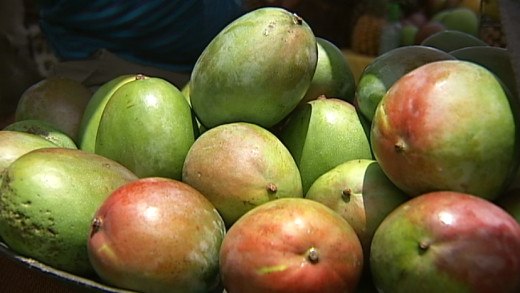 A pile of fresh mangoes ready to be eaten

Mangoes have grown into the hearts of Hawaii islanders. “The richly hued summer orbs … seduce island residents each year with their juicy flavor and fragrance,” wrote festival organizers in a media release. The day – and the fruit – was honored with an official proclamation by Hawaii County Mayor Billy Kenoi and his administration.