HILO, Hawaii – Rain and wind have begun to impact East Hawaii, although with far less severity than anticipated 12 hours ago. Flossie has actually started to move past Hilo, and is now weakening near Maui. The National Weather Service says Flossie is now 80 miles north-northwest of Hilo. Maximum sustained winds are still 40 miles […]

HILO, Hawaii – Rain and wind have begun to impact East Hawaii, although with far less severity than anticipated 12 hours ago. Flossie has actually started to move past Hilo, and is now weakening near Maui. The National Weather Service says Flossie is now 80 miles north-northwest of Hilo. Maximum sustained winds are still 40 miles per hour. Flossie continues to head west northwest at 18 miles per hour.

Crews working for the Hawaii Electric Light Company have been busy. The Hawaii Island utility has announced that fallen trees caused by gusty winds from Tropical Storm Flossie are causing power outages throughout the lower Puna area. At this time, approximately 5,000 customers are without power.

The affected areas include 2,800 customers from Volcano to Glenwood; 2,200 customers from Kalapana to Nanawale; and 1,300 in Panaewa. Service has been restored to the Panaewa, Mountain View, and Kurtistown areas.

“The safety of our employees and customers is our top priority,” said Hawaii Electric Light Company president Jay Ignacio. “We are prepared to restore service as quickly and safely as possible.”

HELCO reports power interruptions and voltage disturbances are possible as long as the stormy conditions persist. The company warns: Do not touch fallen or low hanging power lines or anything they may be in contact with. A seemingly harmless wire may still be energized. Stay clear of puddles where downed lines may have landed. Customers may call 969-6666 to report power outages and downed power lines.

Hawaii Governor Neil Abercrombie announced all department directors have been delegated the authority to determine whether to release employees from work due to the effects of Tropical Storm Flossie.

“Given the uncertainty about the effects of the storm and the diverse nature of departmental operations at each location, our directors are in the best position to make this decision,” Gov. Abercrombie said in a media release. “Each department will assess then determine the employees who can be released and, if so, when the release is appropriate.”

The administration anticipates the release of some employees in Maui and Hawaii Counties today and/or tomorrow, to the extent the storm progresses as currently anticipated. Directors may determine whether employees on Oahu and/or Kauai should be released tomorrow and/or later in the week.

The state says the following categories of employees are unlikely to be released from work, barring unforeseen circumstances:

Meanwhile, down at Honolii Beach Park, thrill seeking surfers and other onlookers were marveling at the power of Flossie as apparent in the Pacific Ocean. Big Island Video News filmed these scenes around 1:30 p.m.  We were told that the waves were twice as big earlier in the day. One surfer called it epic. 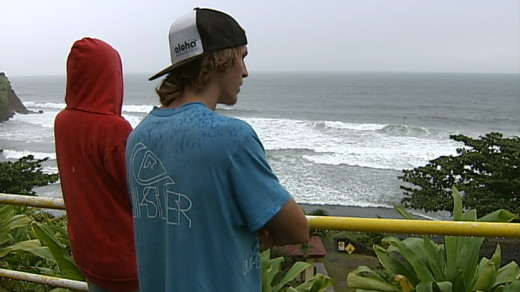 Onlookers at Honolii near Hilo, Hawaii