EDITOR’S NOTE: BIVN used video from a few different sources on this. First, Visionary Video provided a wealth of interviews with crew members. The University of Hawaii distributed some footage, and also made important file video available. You will also notice a few quick scenes shot by the HI-SEAS crew. MAUNA LOA, Hawaii – For […]

EDITOR’S NOTE: BIVN used video from a few different sources on this. First, Visionary Video provided a wealth of interviews with crew members. The University of Hawaii distributed some footage, and also made important file video available. You will also notice a few quick scenes shot by the HI-SEAS crew.

MAUNA LOA, Hawaii – For the first time in almost four months, six researchers who have been living in isolation inside a remote habitat felt the sun on their face, and the cool breeze high on Mauna Loa.

The scientist were part of The Hawai‘i Space Exploration Analog and Simulation, or HI-SEAS. It was a food study – conducted on a grand scale – which was designed to simulate the living and working experience of astronauts on a real planetary mission and to compare two types of food systems: crew-cooked vs. pre-prepared.

Cameras and journalists captured the moment the researchers emerged from the dome on Tuesday. Kimberly Binsted, the HI-SEAS principal investigator, organized a breakfast of earthly delights for the crew to enjoy first thing after stepping out of their habitat of four months – a stark contrast to the meals they had been eating. 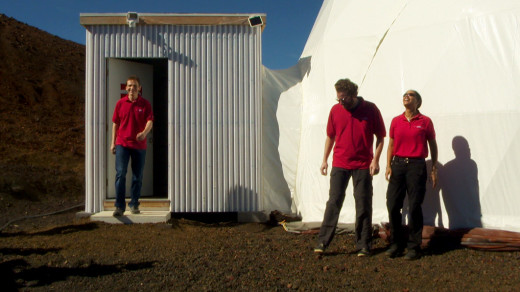 Crew members begin to emerge from their four month habitat, feel the sun for the first time in 120 days.

After seeing Mauna Loa’s martian-like landscape for the first time in 120 days without a spacesuit on, Angelo Vermeulen, the HI-SEAS commander remarked that everything appeared to be in “high definition.

“Its gonna be different once I’m back in the city,” Vermeulen said. “I would love to have a beer, but I’m also concerned that after four months of not drinking any alcohol it would hit hard.”

“I want to go to the beach,” said HI-SEAS researcher and outreach specialist Sian Proctor. “I want to play in the water. We have been on a water shortage. You could only take 2 minute showers. And so I want to get wet!”

“Back on Earth, I just happen to have four weddings to attend in the five weeks since this mission,” said Kate Green, HI-SEAS writer. “Pretty excited about that sort of Earthly welcome.”

Green said she was surprised by how well the crew got along. The social dynamic of the bunch was part of the study. “Crew cohesion,” said Binsted. “How to keep astronauts sane and happy and productive on a long-duration mission is a real risk and we are going to go a long way toward solving that.”

But the main reason the researches were there: food. Vermeulen believes the crew learned alot. He said that “by offering people shelf stable ingredients and the possibility to cook meals with that, that is a really good strategy to keep people enthusiastic about the food they eat. But on the other hand the data still has to be analyzed. Based on this study we’ll be able to offer a strategy that optimizes everything and is a good balance between, on the one hand, not wasting too much time preparing your food and wasting too many resources but on the other hand, keeping your crew fit and healthy.”

As the mission comes to its close, the researchers also announced the winners of the HI-SEAS recipe contest, selected from a list of recipes submitted by members of the public. The winning recipes include: No-crust Quiche Muffins (breakfast); Moroccan Beef Tangine (soup/stew); Lemon-Dill Pasta Salad (side dish); Spam Fried Rice (main dish); and Dark Matter Cake (snack or dessert). Recipes are available on the HI-SEAS website at: hi-seas.org/?p=2204.

The HI-SEAS 2013 Mission is led by Jean Hunter of Cornell University and Kim Binsted of University of Hawai‘i at Mānoa, and is funded by a grant from the NASA Human Research Program.