HILO, Hawaii – A big step for the University of Hawaii-Hilo on Monday. The $32.5 million Hale `Alahonua residence hall was blessed during a celebration involving various state, county and university dignitaries … just one day before students will begin to move into the new building. The new residential complex sits on 33 acres across […] 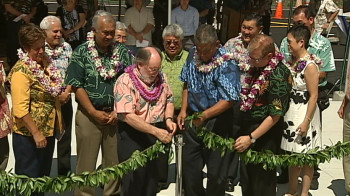 After the new student housing was blessed, officials untied the maile lei.

HILO, Hawaii – A big step for the University of Hawaii-Hilo on Monday. The $32.5 million Hale `Alahonua residence hall was blessed during a celebration involving various state, county and university dignitaries … just one day before students will begin to move into the new building.

The new residential complex sits on 33 acres across from the main campus entrance on Kawili Street. It spans 105,505 square-feet and features approximately 300 units within a trio of three-story residential wings, along with a large, spacious common area and two exterior courtyards. 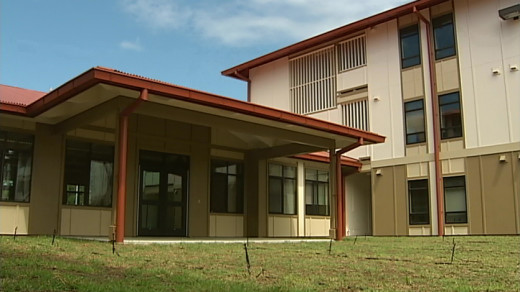 Part of the University Village Phase I, Hale `Alahonua, or “the breeze upon which the fragrance of earth is carried,” represents the first student housing units built on campus since 1989.

Our camera went on a quick tour. Each suite houses two students in private, enclosed bedrooms that include a bed, shelving and computer desk, in addition to a common space with an entry area, sink and bathroom. UH-Hilo says eight units are fully accessible to accommodate students in wheelchairs; sixteen are designed for the visually and hearing impaired.

The common area features a recreational TV lounge with pool tables, a 16-unit computer lab, study/conference rooms, two kitchens, mailing facility, and a laundry room equipped with machines that notify students online or via text messages of the status of their laundry.

UH-Hilo also says Hale `Alahonua brings various services directly to students via satellite operations. Three of the five first-floor offices will serve as a base of operations for Financial Aid, Global Exchange, National Student Exchange, Counseling Services and other key entities, who will make on-site visits when their services are in greatest demand.

The university says the new complex finally produces an adequate housing inventory for its students. Until now, enrollment is in excess of 4,100 – as of Fall 2012 – with approximately 600 beds in its residence halls.

Hale `Alahonua was designed by Mitsunaga and Associates, Inc. (MAI), built by Albert C. Kobayashi, Inc. and managed by SSFM International. The project was completed in less than 24 months, with construction taking only 14 months…. and not without some controversy.

It was reported in the media that a letter sent to SSFM International Construction Manager Robert Yamada by an architect employed by Mitsunaga & Associates claimed alleged decisions by SSFM like the one to install “unapproved, lesser grade windows” – or the decision to change the design of the floor tile – jeopardized the building’s certificate of occupancy, possibly delaying the dorm’s fall opening.

According to a May 2013 article in Hawaii Reporter, UH President MRC Greenwood – who had ultimate authority over the university procurement – declined to appear before the legislature to answer questions about the project. She resigned a few weeks later.

No mention was made of the controversy during Monday’s event, although there seemed to be hints of acknowledgement in some of the speeches.

“The construction over those 14 months was a period in which this project was much discussed,” said UH-Hilo Chancellor Donald Straney. “But, beginning tomorrow morning at 8 o’clock, this building is gonna be much appreciated by the students of UH-Hilo as they move in and live here while they study.”

“Of course, there’s no problem with the present governance,” joked the governor, in reference to his own position.