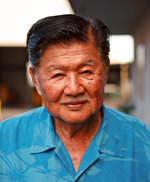 HAWAI‘I ISLAND – Suisan Company, Limited has established an endowed scholarship in honor of Rex Y. Matsuno at Hawai‘i Community College with a $35,000 gift. The Suisan Company, Limited / Rex Y. Matsuno Culinary Scholarship Endowment will support students who are graduates of a high school on the Big Island of Hawai‘i and are enrolled as full-time students in the Culinary Arts program.

“Hawai‘i Community College is proud to establish an endowed scholarship that will provide local students with financial resources to support their dreams of earning a college degree in the culinary arts,” said Hawai‘i Community College Chancellor Noreen Yamane. She continued, “Hawai‘i CC will honor this donation with our commitment to provide students with high quality instruction that will take them from the classroom to the workplace. We thank Suisan Company, Limited for their generosity and helping our students follow in the footsteps of the Matsuno family and become success stories for this island.”

Glenn T. Hashimoto, CEO of Suisan Company, Limited added, “This scholarship was established to honor Rex Y. Matsuno’s contributions to the food industry on the Big Island of Hawai‘i and recognize the company’s existence for over 100 years.” Hashimoto continued, “This effort to reach out to our community will provide educational opportunities to students studying culinary arts”.

Suisan Company, Limited was incorporated in 1907 by fishermen and fish peddlers operating in the former Waiakea Town in Hilo, Hawai‘i. Kamezo Matsuno, Rex Yoshio Matsuno’s father, was an “issei” immigrant who came to Hawai‘i from Okikamura, a small fishing village in Oshima-Gun, Yamaguchi Ken, Japan. At around age 29, Kamezo was one of the youngest of the original founders of what was then called Sui San Kabushiki Kaisha (Japanese version of Suisan Company, Limited). Suisan persevered through two World Wars and the April 1, 1946 tsunami that devastated the coastal city of Hilo. As the years went by, the older Suisan founders retired or passed on. Kamezo formally took up the reins as Suisan’s fifth president in 1950.

Rex Y. Matsuno followed in his father’s footsteps, working at Suisan’s fish market while going to school in his youth. Rex heeded a higher calling to serve his country when World War II broke out and upon returning from the war Rex attended the University of Hawai‘i at Hilo under the “G.I. Bill”. Imbued with a true entrepreneurial spirit and vision, Rex embraced the then revolutionary concept of frozen foods and started Suisan’s frozen food distribution division in 1949.

The fateful May 23, 1960 tsunami would wipe-out and effectively end the existence of former Waiakea Town, where Suisan’s fish market and frozen food distribution divisions had been thriving. Down but not out, Suisan rebuilt and expanded both operating divisions under Rex’s leadership, and further diversified into fruit processing, the distribution of paper products, and other ventures related to the company’s primary businesses. In 1967, Rex Y. Matsuno took the helm as Suisan’s sixth president.

Rex Y. Matsuno’s drive and commitment to provide exceptional customer service caused Suisan to continually expand its refrigerated facilities and delivery fleet as Suisan’s businesses grew. Today, Suisan is the premier food distributor on the Big Island of Hawai‘i and one of the Top 250 businesses in the State of Hawai‘i. 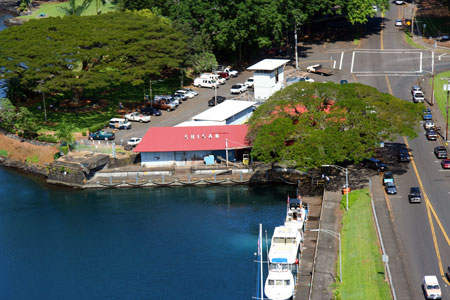 Suisan as seen from above