HILO, Hawaii – Two Hawaii County police officers who were shot in early January were honored on Friday with the Police Cross award. Officers Joshua Gouveia and Garrett Hatada were presented the award by Police Chief Harry S. Kubojiri, in a room full of fellow police officers, friends and family. Both officers appear to be […]

HILO, Hawaii – Two Hawaii County police officers who were shot in early January were honored on Friday with the Police Cross award. 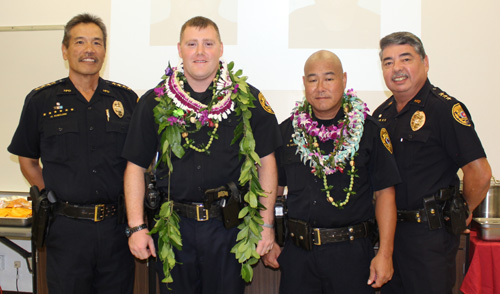 Both officers appear to be doing well these days. That wasn’t the case on January 2, when Gouveia and Hatada responded to a report of several gunshots heard in the area of Kilauea Avenue near the Wailoa River in Hilo. It was 8:52 at night when the officers began checking parked vehicles in the area of the 800 block of Kilauea Avenue. Thats when a man hiding under one of those parked vehicles opened fire. Both Gouveia and Hatada were hit.

The suspect, 31-year-old Keaka D. Martin of Hilo, fled the area on foot. A huge manhunt was underway.

Martin was captured the next day, hiding out in a home on Palai Street. Police say he attempted to take his own nlife, but the suicide failed. He was later charged with numerous offenses including two counts of first-degree attempted murder.

Its been a long road to recovery for the two men in blue. Officer Joshua Gouveia was able to attend the Police Week ceremony in May, honoring the Big Island’s fallen law enforcement over the years. Four men who gave the ultimate sacrifice in the line of duty, and a chilling glimpse at what could have been.

Now, almost a year later, both officers are honored with the police cross, as well as formal recognition from the office of the mayor, and a room full of thankful family.