NORTH KONA, Hawaii – Hawaii County announced the purchase of the treasured, 217-acre O’oma land parcel on Friday. The reported $6.2 million purchase was slightly more than half the $12 million asking price. The buy was made using Public Access, Open Space and Natural Resources (PONC) funds, made possible by a 2% percent set aside […]

The reported $6.2 million purchase was slightly more than half the $12 million asking price. The buy was made using Public Access, Open Space and Natural Resources (PONC) funds, made possible by a 2% percent set aside of Hawaii County’s collected real property taxes. The transaction closed on December 31, 2013. 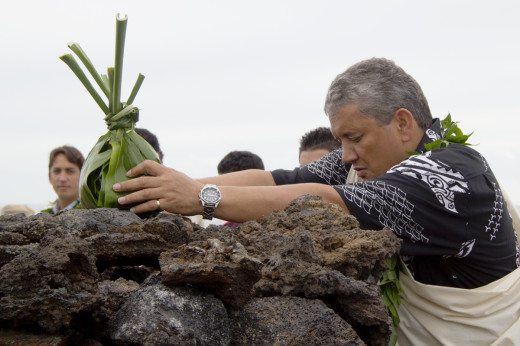 Mayor Billy Kenoi presents a hookupu at the ahu built by those involved in Friday’s ceremony at O’oma. Photo courtesy Hawaii County.

Located between the Shores at Kohanaiki Golf Club and NELHA in Kona, O’oma is a prized stretch of undeveloped coastline. The parcel was ranked as the number one priority for purchase by the PONC Commission in 2012. It was previously ranked #5 (2007) and #7 (2011), both during years when the parcels were not up for sale. 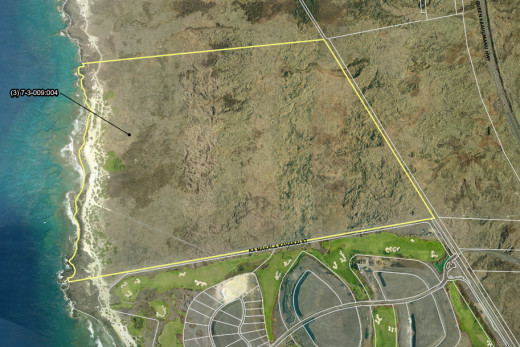 On Friday, the county planned to hold a ceremony on the newly purchased land, but rain forced a change in plans. Instead, everyone gathered at the West Hawaii Civic Center to celebrate the acquisition, where local leaders rejoiced in a donation for $2 million presented by Kohanaiki Shores, the neighboring development that “has shown a commitment to preserving the beauty of Kona”, according to the county. 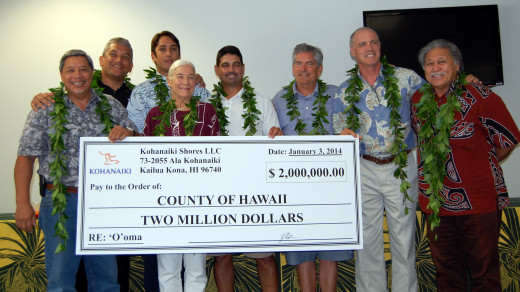 Later, as the rains let up, the group went to the site to bless the land. The ceremony included a community building of an ahu, or altar for offerings. The cultural demonstration signaled the end of a decades long battle to preserve the open shoreline space, and marked the beginning of O’oma as an asset of the public trust. 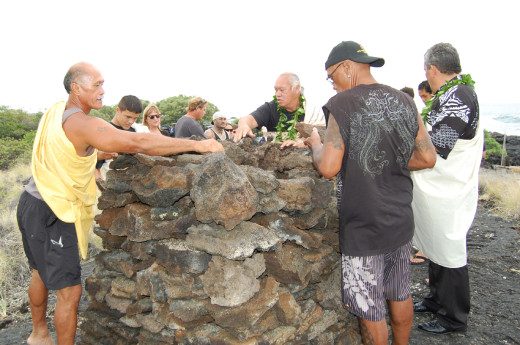 According to the county:

This acquisition also enhances the public benefit of the 1.5 mile Kohanaiki Beach Park just to the south of ‘O‘oma, which opened to the public in June 2013. The County anticipates preserving ‘O‘oma in its current natural condition as a buffer between the mauka urban area and the ocean, while allowing access for passive recreation and subsistence fishing.

The property was sold for $35 million several years ago, purchased outright by developer Dennis Moresco. Moresco attempted to get approval from the State Land Use Commission to rezone the conservation district lands to urban, in order to proceed with the planned Ooma Beachside Villages development.

A passionate community rallied in defense of the conservation lands, and the land use commission denied the developer’s request.

In May 2012, 300 acres at Ooma were put on the market with an asking price of $26 million. The offer included two parcels, the 217-acre O’oma makai and the 83-acre O’oma mauka. It was the larger, shoreline parcel that the public wanted to preserve, and that was the parcel that was prioritized by the PONC commission.

Local leaders shared their reaction in a county media release: