Kona Officer of the Month is Marlin Hopson 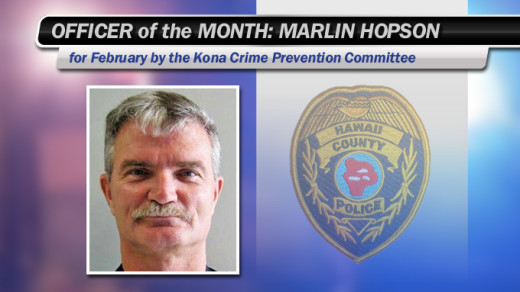 KAILUA-KONA, Hawaii – The arrest of two brothers who were riding in a stolen car has earned Officer Marlin Hopson “Officer of the Month” for February in West Hawaii.

The Kona Crime Prevention Committee recognized Officer Marlin Hopson as “Officer of the Month” for February in a luncheon ceremony Wednesday (February 5) at Huggo’s restaurant in Kailua-Kona.

Hopson was honored for arresting two brothers who were riding in a car shortly after it was reported stolen.

On November 27, the car was reported as having been taken from the area of the Kona pool. The victim was able to obtain information about the location of a cellular phone, which was believed to be inside the car.

While responding to that location, Officer Hopson passed a car matching the description of the stolen car, which was traveling in the opposite direction. After the officer turned around to check the license plate number, the car fled. Hopson saw it turn into a local subdivision, where it crashed.

He was able to apprehend both occupants, including one who had exited the car and was hiding in the bushes.

The victim’s credit card was found in possession of the driver, as was marijuana. A search of the vehicle revealed a meth pipe with residue.

The two men were charged with an assortment of felonies.