OOKALA, Hawaii – Jointly managed state lands known as the “Ookala Community Forest” will be transferred into the Humu’ula section of the Hilo Forest Reserve if the land board approves a plan on the April 25 meeting agenda.

From the submittal document:

Background: On July 10, 1998 Item D-1, the Board of Land and Natural Resources (Board) approved setting aside TMKs (3) 3-9-001: por. 013 and 018 (Exhibit C) which are State lands as well as former cane lands, to the Division “for potential demonstration forest projects.” On July 28, 2000 Item C-2, the Board approved a Master Cooperative Agreement between the Division of Forestry and Wildlife, the Laupahoehoe Train Museum, the North Hilo Community Council and the Laupahoehoe High School, to conduct services relating to the “Ookala Community Forest”, which was defined to be composed of TMKs (3) 3-9-001: por. 013 and 018. According to the Master Cooperative Agreement which was executed on September 26, 2000, the land in question would remain under the jurisdiction of the Division, and the community partners would mobilize resources needed to manage the land and implement projects that are mutually agreed to by the oversight committee. The State, in exchange, would allow the community continued access during the life of the agreement, which is still ongoing. On May 9, 2002, Eo3992 was executed, officially setting aside both parcels to the Division of Forestry and Wildlife “FOR POTENTIAL DEMONSTRATION FOREST PROJECTS ALONG HAMAKUA COAST.”

In September 2002, the Laupahoehoe Train Museum was awarded a Forest Stewardship Grant for management activities at the “Ookala Community Forest” and entered into an agreement to implement management activities outlined in their Forest Stewardship management plan. They are no longer receiving cost share assistance from the State under the grant and are currently in the maintenance phase of their contract which terminates on June 30, 2030. In addition to the Forest Stewardship agreement, TMK (3) 3-9-001 2013 is currently encumbered by two perpetual non-exclusive easements: Land Office Deed (LOD) 28504 with Verizon Wireless Inc. and LOD 28144 with Hawaii Electric Light Co. Inc.

Discussion: Under the current set aside, the demonstration forest designation threatens to jeopardize effective management, planning and related enforcement activities due to a lack of applicable rules and statutes. Changing the designation of these parcels to forest reserve would place the area under broad forest reserve management guidelines and afford it the protection of the statutes and administrative rules that exist for the Forest Reserve System.

The utility easements LOD 28504 and 28144 will not be affected by the change in designation. Additionally, the Division of Forestry and Wildlife currently has management jurisdiction of these lands, and would retain jurisdiction with their transfer to the Forest Reserve System. The Division will develop an appropriate land use agreement with the Laupahoehoe Train Museum to allow continued management and maintenance of the “Ookala Community Forest” as established in the Forest Stewardship Agreement. As such, management objectives for the area would not change with this transfer.

Therefore, the Division seeks the cancellation of Executive Order (EO) 3992, to be replaced by a new EO incorporating TMKS (3) 3-9-001: por.013 and 018 into the Forest Reserve System as part of the Humu‘ula section of the Hilo Forest Reserve.BLNR submittal

The approval from the Board of Land and Natural Resources would be in concept. There would likely have to be a public hearing scheduled on Hawaii Island sometime in the future. 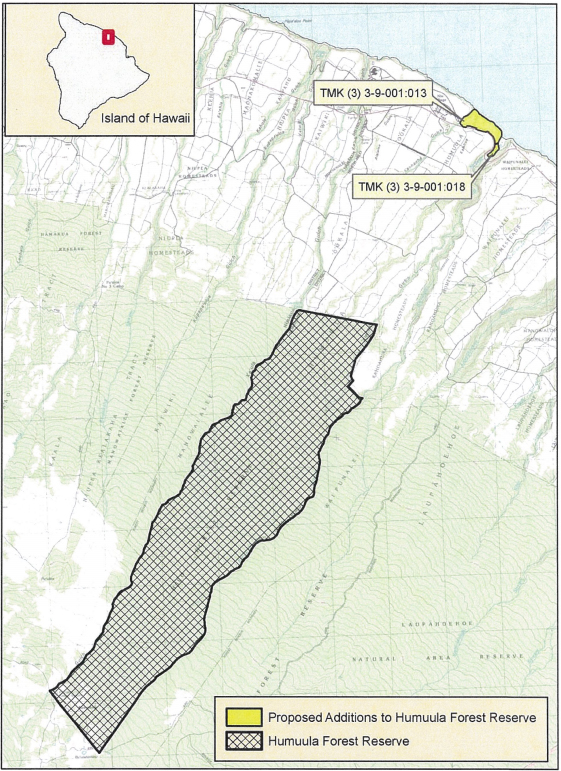 map shows the full Humu’ula section of the Hilo Forest Reserve in relation to the O’okala Community Forest, from the BLNR submittal