There are minimum wage, overtime, discrimination, and harassment protections for housekeepers, childcare workers, caretakers, and maids.

This media release was also issued by the state:

HONOLULU — Governor Neil Abercrombie and the Department of Labor and Industrial Relations (DLIR) today announced the launch of a multilingual public education campaign concerning domestic workers. Signed by Gov. Abercrombie last year, Act 248, Session Laws of Hawaii 2013, provides for minimum wage, overtime, discrimination, and harassment protections for domestic workers. Prior to Act 248, domestic workers were excluded from these basic protections of state wage and hour and fair employment laws afforded to others.

“This law establishes long-overdue equity for Hawaii’s domestic workers; Hawaii is the second state to pass laws that protect domestic workers from discrimination at work and provide overtime and minimum wage protections that all workers deserve,” said Gov. Abercrombie. “The goal of the ‘Domestic Workers Have Rights’ public education campaign is to raise awareness because these new protections are meaningless if workers and their employers do not know about them.”

“This education campaign is about peace and justice in the home. It’s about showing the humanity of a long devalued kind of work,” said Dr. Nancie Caraway, First Lady of the State of Hawaii and chair of the Domestic Workers Have Rights Working Group.

Mila Kaahanui, executive director of the Office of Community Services (OCS), added: “Workers protected under this law include housekeepers, childcare workers, caretakers, maids, and gardeners among others that work in the home of their employers. These workers are often hidden from view and many may have limited English proficiency.”

The Domestic Workers Have Rights campaign has created informational material in 10 different languages and English. The campaign will reach out into the community through OCS’s Immigrant Resource Centers on Kauai, Oahu and Hawaii. Educational material will also be posted on TheBus, available on the DLIR website, and disseminated through community organizations. In addition, complementary radio spots will begin running on select radio stations later this month.

For more information about the new laws and the Domestic Workers Have Right campaign, visit: http://labor.hawaii.gov/domestic-workers-rights/ 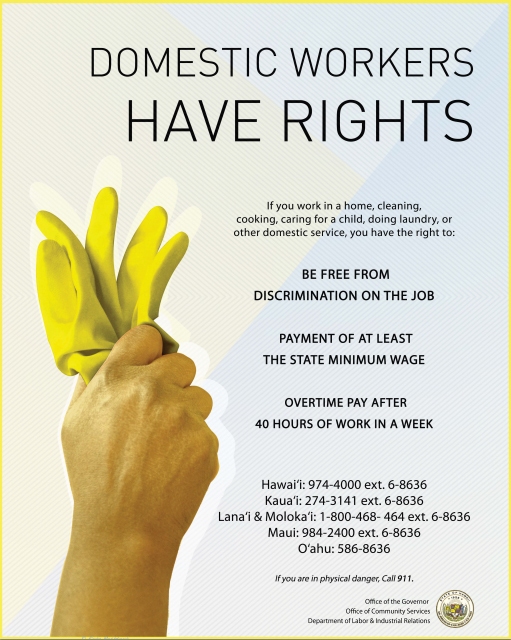 This poster is an example of the campaign material being disseminated by the state.