Kale Gumapac is again without a home, after police arrested him for trespassing on a contentious Hawaiian Paradise Park property.

(ABOVE VIDEO) Kale Gumapac relates the latest chapter in his struggle to keep his home. Video includes footage of a recent dispute between Gumapac, police, and a Realtor, taken by Nanci Munroe.

PAHOA, Hawaii – Kale Gumapac is again without a home, after police arrested him for trespassing on a contentious Hawaiian Paradise Park property.

One month ago, prosecutors dropped illegal trespassing charges against Kale Gumapac after he was arrested in 2013 for being on the property. Gumapac refused to pay the mortgage on his HPP home – he says he was only following the terms of his contract – which resulted in his forceful eviction. Gumapac and his lawyer Dexter Kaiama assert there is an inherent defect in all land title in Hawaii thanks to the overthrow of the Hawaiian Kingdom. They say the loan agreement calls for the Title Insurance Company to pay off the mortgage because of the defect in title. The situation – and its relationship to ongoing Hawaiian sovereignty struggle – was documented in a five part video series in December 2013.

Deutsche Bank, the trustee of the mortgage, and Ocwen Loan Servicing, the servicer of the mortgage, apparently disagree with Gumapac’s position. A non-judicial foreclosure was initiated, and Gumapac was served an eviction notice and later arrested for living at his home. Ocwen later agreed to a $2.1 billion joint state-federal settlement for servicing misconduct across the United States. Gumapac was one of the beneficiaries of the settlement.

In Hilo court, Kaiama argued that judges lack jurisdiction over the subject matter, because Hawaii is illegally occupied by the United States, and Hawaiian Kingdom law should be applied. Kaiama has even filed war crime charges against Hawaii judges and sheriffs officers in International Criminal Court.

Gumapac is founder of Laulima Title Search & Claims, which aims to assist home owners in foreclosure to keep their property using similar arguments.

Gumapac, Kaiama and supporters celebrated in July when the trespassing case was dropped. Gumapac returned to his home, which had been put on the market by a Realtors. A week ago, police visited Gumapac at the HPP home, but Gumapac was able to convince officers that the situation was a civil matter and not a criminal matter. The incident was videotaped by Gumapac supporter Nanci Munroe. The authorities left, and Gumapac declared it was a good day for the good guys.

But a few days later, officers returned; one of two more police visits to the Hawaiian Paradise Park home. The second visit resulted in Gumapac’s arrest. Gumapac’s belongings are still in the home, which he says has already been rented out to new tenants. If he tries to go back to get his stuff, Gumapac says he was told he will be charged with burglary. 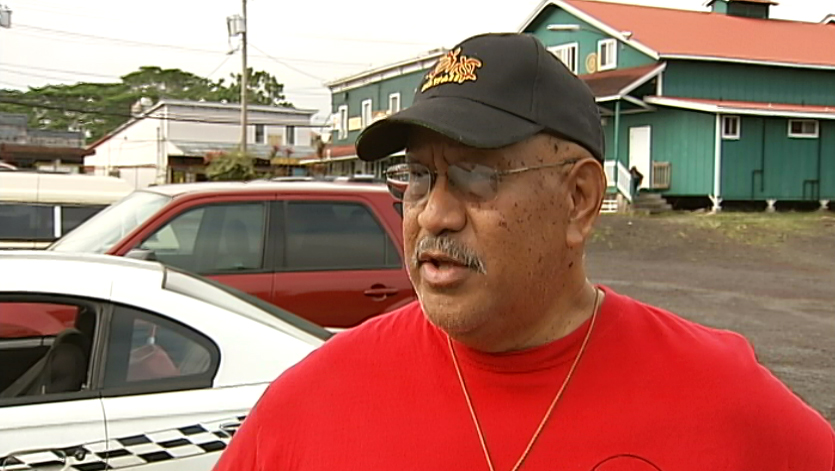 Kale Gumapac recounts the latest developments in Pahoa, after his arrest that morning in HPP.

We interviewed Gumapac in Pahoa about this latest chapter in the HPP home saga. During the interview, Gumapac mentioned an alleged warrant or summons issued to Circuit Court Judge Harry Freitas, presumably in relation to war crimes charges filed with the ICC. Gumapac says Freitas willfully deprived him of a fair and regular trial prescribed by the Fourth Geneva Convention. The rumor was perpetuated in a recent blog post on the Hawaiian Kingdom website. Big Island Video News has been unable to verify this story. We spoke to the State Judicary public affairs office and also the Hawaii County Prosecuting Attorney Mitch Roth. Both said the information is unfounded. We were unable to speak directly to Judge Freitas.