VIDEO: All About Albizia, “The Tree That Ate Puna”

An interview with ecologist Flint Hughes on the subject of albizia

(ABOVE VIDEO) An interview with ecologist Flint Hughes on the subject of albizia, the invasive and easily toppled tree that wrecked havoc around Puna thanks to Hurricane Iselle.

HILO, Hawaii – Hurricane Iselle left her mark in Puna, where the damage was made worse by the many fallen albizia trees. In Puna, albizia – or Falcataria moluccana – line highways and fill vacant subdivision lots. They can look pretty, forming scenic canopies across the land, giving Puna the shaded, rain-forest character that many have come to cherish in recent decades. But Iselle was a reminder to residents that the tree is a statewide ecological and public safety problem. Albizia are known for their “rapid and pervasive growth, which destroys native forests by shading out native plants and improving conditions other invasive flora, such as strawberry guava,” according to Ecologist Flint Hughes, with the U.S. Forest Service, whom we interviewed in the video above. Even in minor wind storms, the brittle branches and shallow roots of albizia easily break. Iselle left a tangled mess of thousands of albizia on homes, roads, and power lines. 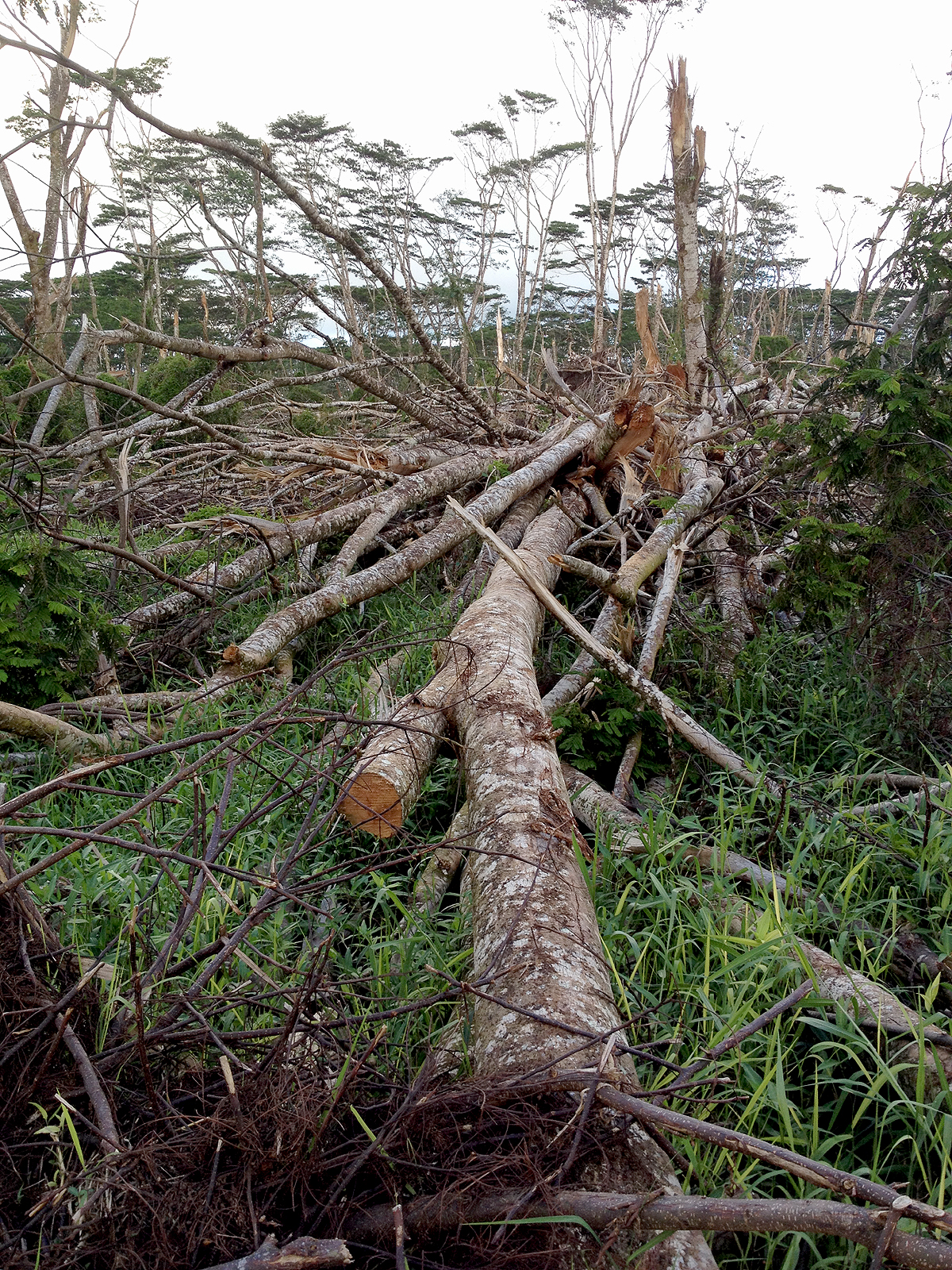 Piles of fallen albizia cover the forest surrounding Pahoa. This was a common site wherever the invasive tree grows in Puna following Iselle.

Leaders have placed a bulls-eye on albizia. In the days following Iselle, U.S. Senator Brian Schatz – who spent a lot of time in the storm ravaged district – issued this media release:

Agreement was reached by all parties that all levels of government share responsibility for dealing with the hazard that these trees pose, and that the federal, state, and county government would provide financial and other resources towards this mitigation plan. HELCO also agreed, subject to approval by the PUC, to participate in the hazard mitigation program.

“Albizia wreaked havoc on power infrastructure and damaged private property, and we have to work together to minimize the likelihood that this happens again. I’m thankful for Mayor Kenoi’s leadership and assistance in helping to put together the resources necessary to mitigate this problem.”U.S. Sen. Brian Schatz on August 19, 2014

Its unclear if such plans for albizia mitigation have already been dealt a fatal blow. The Federal Emergency Management Agency denied Hawaii’s request for major disaster declaration in the wake of Iselle. The state’s request sought individual assistance (individuals and households affected by the storm) as well as Hazard Mitigation funds for use in statewide projects, presumably like the albizia mitigation project named in the senator’s August 19 media release.

Orchidland resident Yen Chin referred to albizia as “the tree that ate Puna” during this interview about the altered landscape of Highway 132.