Lava could hit the northwest part of Kaohe Homesteads within the day.

PUNA, Hawaii – Lava could hit the northwest part of Kaohe Homesteads within the day, as Hawaii County scrambles to prepare the Puna community for a natural disaster.

The current assessment shows the surface lava flow continues towards the northeast and has advanced approximately 150 yards since yesterday. Presently the leading edge of the surface flow is located approximately 0.2 miles from the northwest or upper corner of the Wao Kele Forest Reserve and Kaohe homesteads boundary. Currently the flow does not pose and immediate threat to area communities however residents of the Kaohe Subdivision are advised to monitor the local radio broadcasts for further updates and for possible evacuation instructions if conditions change. Residents will be given adequate notice to safely evacuate should that be necessary. Personnel of the Civil Defense Office will be continuing door to door notification in the North Road area of Kaohe Homesteads.

There is no brushfire threat at this time and all burning is limited to the vegetation that is in direct contact with the flow. Smoke conditions may be moderate to heavy depending on wind conditions. During periods of heavy smoke conditions the department of Health and American Lung Association have provided the following recommendations:

2. If possible close all windows and if available use air conditioners on a recirculation setting.

3. If driving through areas of heavy smoke keep windows closed and if available use the air conditioner on the recirculation setting.

4. If symptoms or discomforts increase to seek medical attention and leave the area.

Residents in the subdivisions of Hawaiian Beaches and Hawaiian Paradise Park are advised that construction activities on the Railroad Avenue and Government Beach Road have started and will be running continuously through the weekend and next week. These activities are to establish alternate road access in the event Highway 130 is affected by the lava flow.

The public is reminded that the flow cannot be accessed and is not visible from any public areas. Access to the Kaohe Homesteads subdivision will be restricted and limited to subdivision residents only. Hawaii County Civil Defense, Sept. 13

The June 27th lava flow is unique among the hundreds of lava flows that the Puʻu ʻŌʻō vent on Kilauea’s East Rift Zone has erupted, scientists say, because of its narrowness and rapid development of a robust tube system within subsurface cracks. “Our best estimates,” stated the USGS Hawaiian Volcano Observatory in its most recent Volcano Watch article, “suggest that the tube is transporting about 300,000‒400,000 cubic meters per day (55,000‒73,000 gallons per minute) of lava to the flow. This is approximately the long-term average eruption rate for Puʻu ʻŌʻō over its 31-plus year eruptive history.”

The June 27th lava flow remains active. An HVO overflight yesterday at 12:30 pm showed the flow front was still moving in a general northeast direction, bringing it closer to the western boundary of Kaohe Homesteads (which is the eastern boundary of the Wao Kele o Puna forest reserve). The flow front at that time was 14.9 km (9.3 miles) from the vent, measured in a straight line, and 170 m (0.1 miles) from the Forest Reserve/Kaohe Homesteads boundary. The actual length of the flow, measured along the lava tube axis (so that bends in the flow are considered) is 17.1 km (10.6 miles). Between September 6 and 10, the flow front advanced at approximately 400 meters (460 yards) per day. Between September 10 and 12 the advance rate dropped to approximately 250 meters (270 yards) per day. The flow front is still in thick forest, creating smoke plumes as it engulfs trees and other vegetation, but fires are not spreading away from the flow.USGS Hawaiian Volcano Observatory on Sept. 13, 2014

A Lava Flow Informational Fair will be held on today from 10 a.m. to 2 p.m., at the Pāhoa High School Cafeteria. Representatives from public agencies, private companies, and community groups will be on hand to answer questions about transportation, moving, storage, insurance, finances, legal matters, health care, and more. 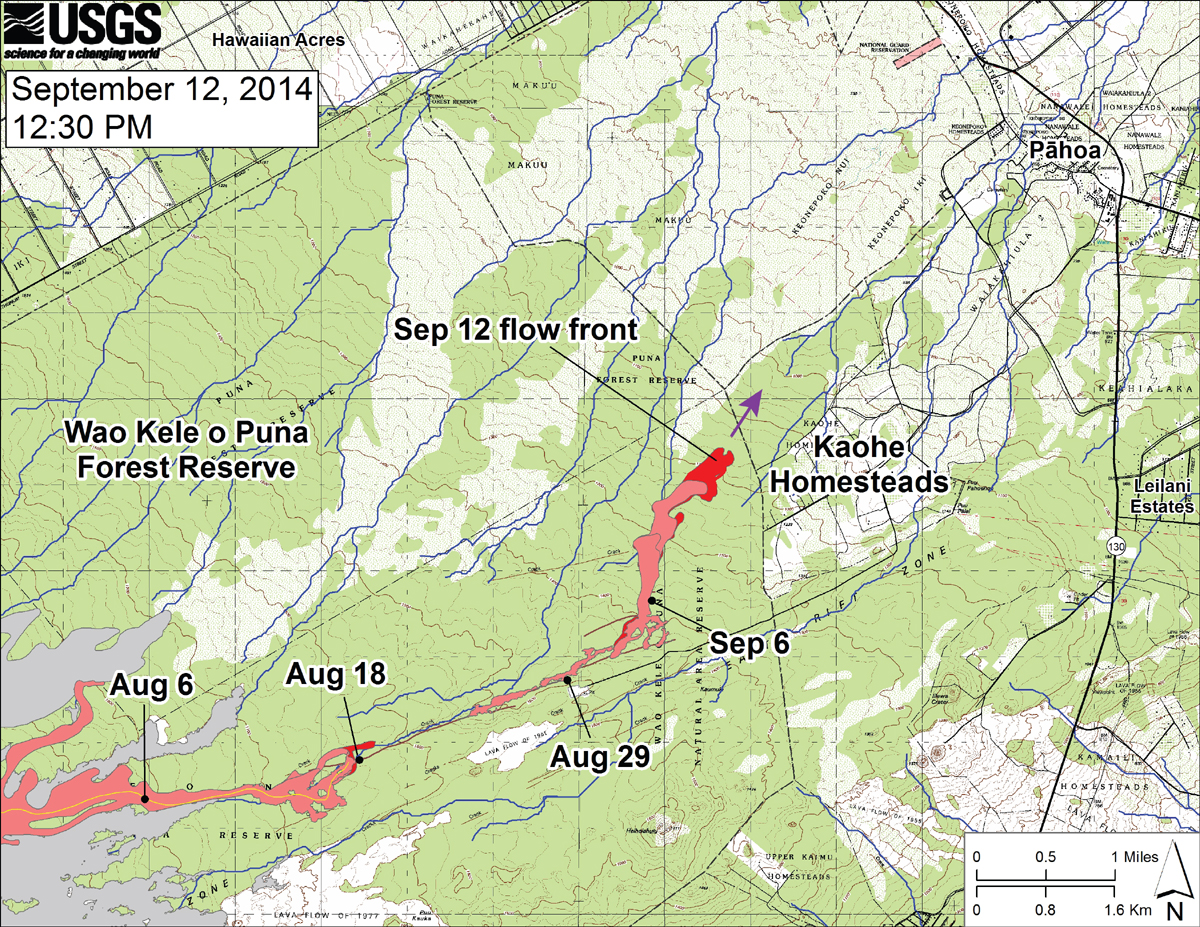 USGS HVO: “This large-scale map shows the distal part of the June 27th flow in relation to nearby Puna communities. The black dots mark the flow front on specific dates. The latitude and longitude of the flow front on September 12 was 19.46388/-154.98343 (Decimal degrees; WGS84). The blue lines show down-slope paths calculated from a 1983 digital elevation model.” 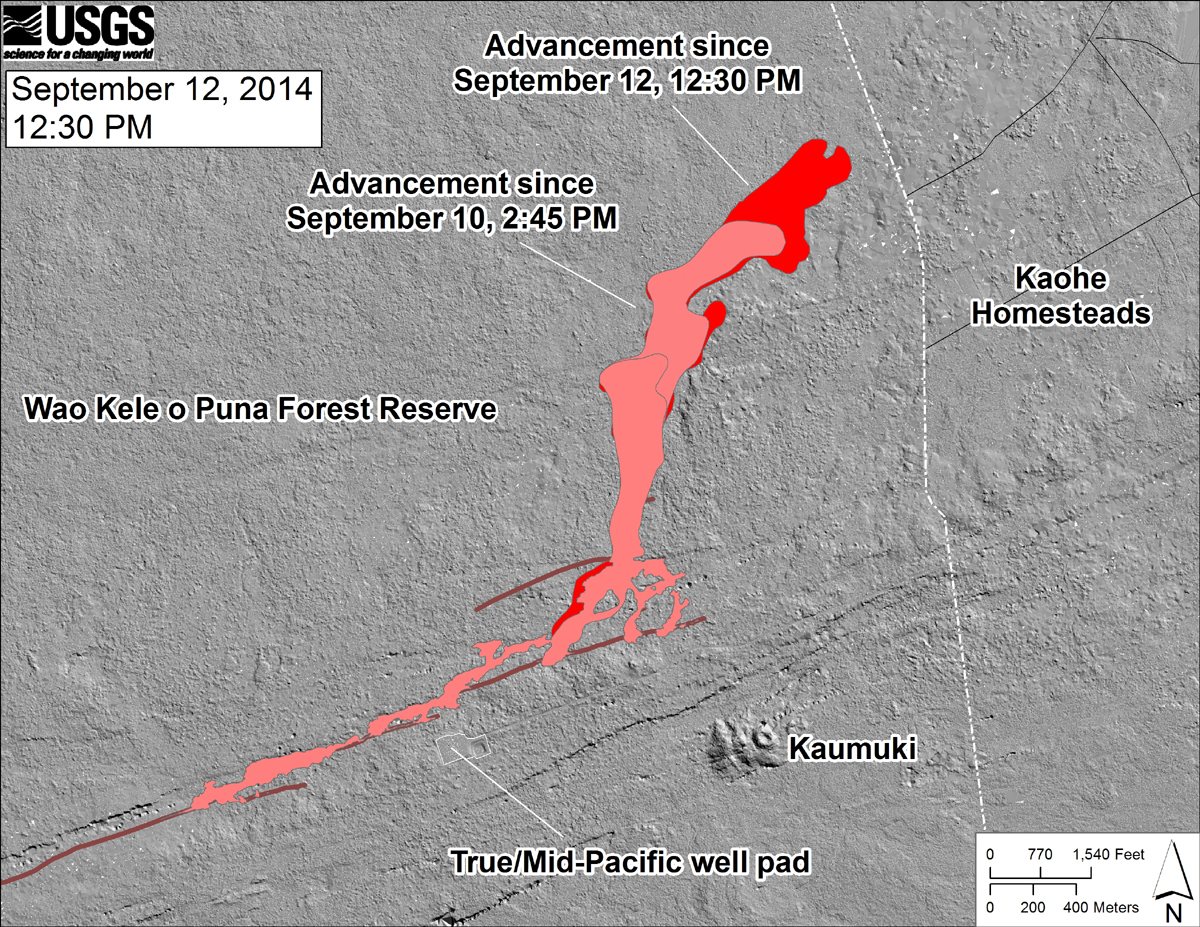 USGS HVO: “This shaded-relief map, with digital surface data provided by the Carnegie Airborne Observatory, shows some of the cracks, faults, and grabens (down-dropped blocks between adjacent faults; http://earthquake.usgs.gov/learn/glossary/?term=graben) that are present in Kīlauea’s East Rift Zone, and which have partly controlled the June 27th flow’s advance direction. The June 27th flow as of September 10, 2014, at 2:45 PM is shown in pink, while flow advance since then (as of ~12:30 PM on September 12) is shown in red. At the time of the mapping, the flow was advancing toward the northeast. “