Gov. Abercrombie was on the ground Tuesday with staff and owner of a property affected by the lava flow. 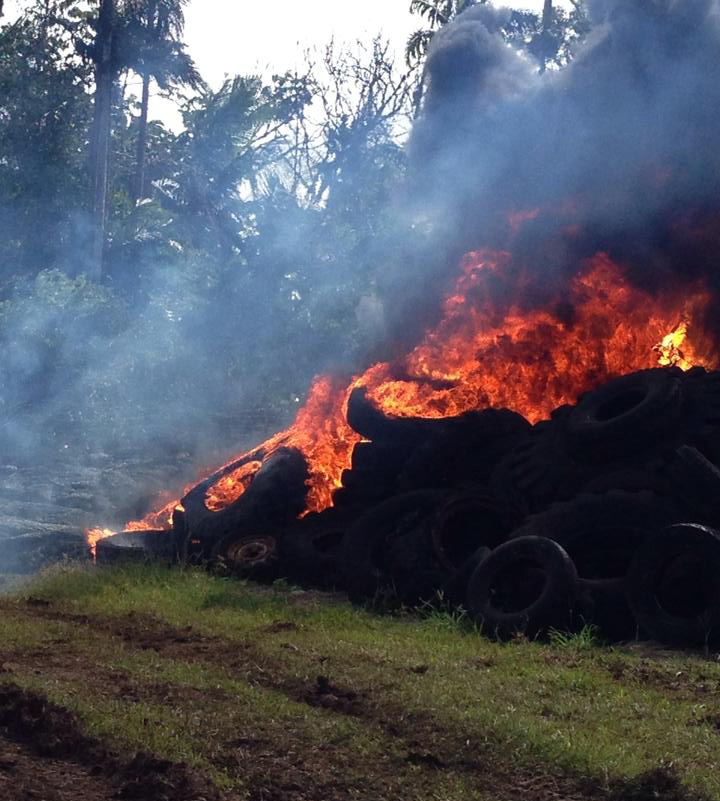 Burning tires as seen from the ground on Tuesday.

This is an eruption and lava flow Information update for Tuesday, October 28 at 6:15PM. The flow continues to remain active and has advanced approximately 45 yards since this 1:30 this afternoon and is currently approximately 370 yards from Pāhoa Village Road. The flow front is currently moving in a northeast direction and has entered a private residential property. The flow advancement has been averaging approximately 10-15 yards per hour.

Smoke conditions were moderate with moderate trade winds from the northeast pushing the smoke in a south southwest direction. Presently burning activity is involving a variety of materials to include tires and smoke conditions may increase in some areas. Residents down wind that may be sensitive or have respiratory problems are advised to take necessary precautions and to remain indoors. Additional health advisories may be issued depending upon materials involved with any fires associated with the lava flow.

The Pahoa Village Road between Apa’a Street and the Post Office Road will remain closed and limited to area residents only. Motorist should use caution and slow down on Highway 130 near the Post Office Road intersection. Residents of the restricted area should not bring unauthorized persons into the restricted area. In addition, Civil Defense and public safety personnel will be operating in the area round the clock to maintain close observations of flow activity. Additional updates will be broadcasted as conditions change.Hawaii County Civil Defense on Oct. 28 at 6:15 p.m. HST

Scientists of the USGS Hawaiian Volcano Observatory conducted ground observations of the June 27th lava flow on Tuesday, October 28, 2014. The flow continued to move through private property today. The advance rate of the narrow leading edge has been variable over the past day, and as high as 16 meters (17 yards) per hour. The flow width was less than about 50 meters (55 yards) at the leading edge and as wide as 150 meters (165 yards) immediately upslope as breakouts have occurred along margins of the flow. Portions of the flow continued to inflate by as much as 2 meters as new fresh new lava was delivered to the advancing flow front. 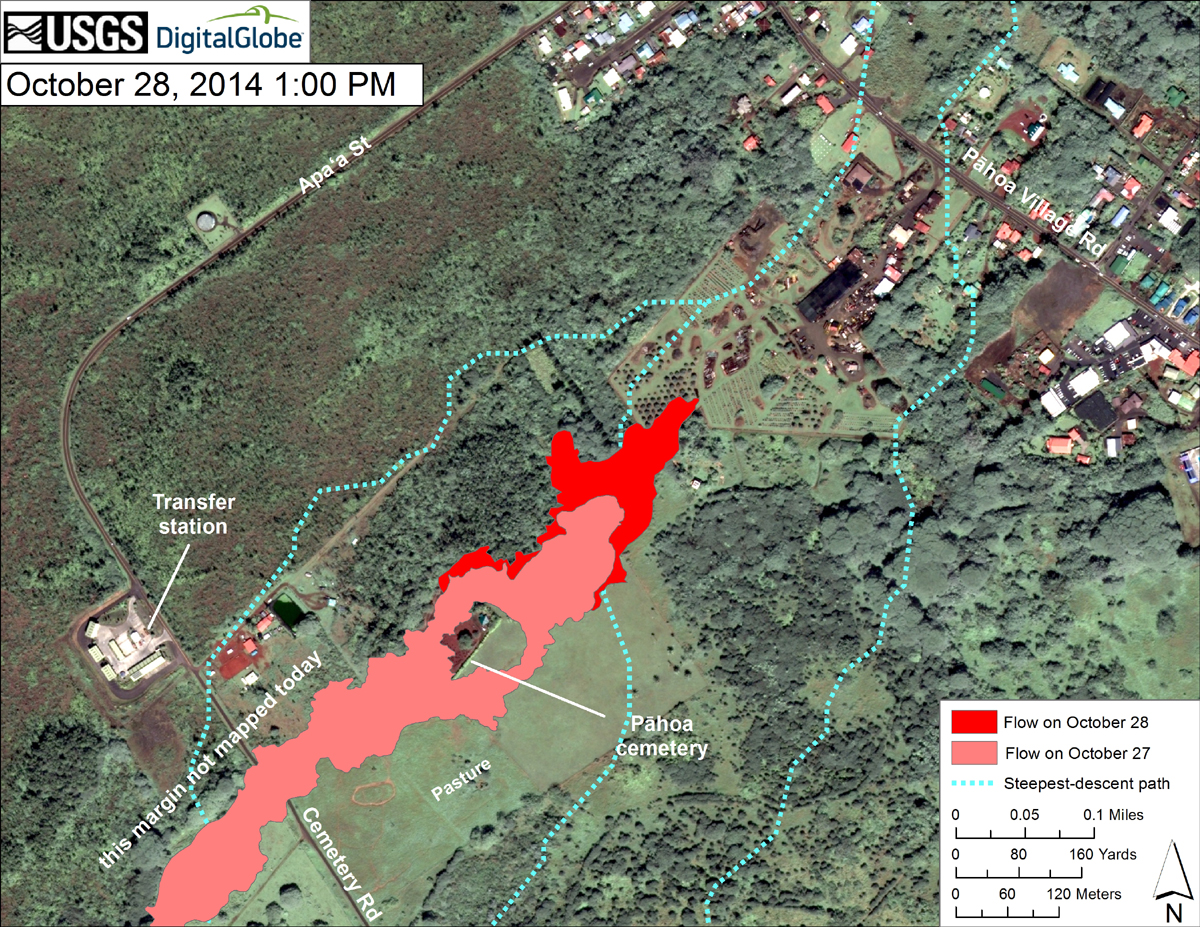 This USGS HVO map uses a satellite image acquired in March 2014 (provided by Digital Globe) as a base to show the area around the front of the June 27th lava flow. The area of the flow on October 27, 2014, at 11:30 PM is shown in pink, while widening and advancement of the flow as mapped on October 28 at 1:00 PM is shown in red. The mapping today was focused on the immediate flow front region, and did not cover the western margin of the flow near Apaʻa St. (see marked margin). Also, another lobe upslope of Cemetery Rd. is not shown in this map, but it only advanced about 30 m (33 yards) over the past day. The dotted blue lines show steepest-descent paths in the area, calculated from a 1983 digital elevation model (DEM).
The flow advanced about 150 meters (164 yards) between these two mapping times, and was advancing through private property this afternoon. At the time of mapping (1 PM), the flow was 390 meters (430 yards) directly upslope from Pāhoa Village Road. The latitude and longitude of the front as of 1 PM was 19.49412, -154.95378 (Decimal Degrees; WGS84). Though not shown on this map, the flow front advanced an additional 70 meters (77 yards) by 5:30 PM.