Footage shows nearest threatened home and a busy town working to prepare for the coming lava.

(ABOVE VIDEO) Once again taking to the sky above the lava flow aboard Paradise Heliscpters, Mick Kalber films the flow front as it moves its way towards the residential area of Pahoa. The video is in its raw form as it was distributed to news outlets.

This video was taken at 1 p.m. on October 27 when the flow was about 600 yards upslope from Pāhoa Village Road. It was also close to 70 yards away from the nearest residential property. The footage shows the town below busy preparing for the coming lava. Hawaii Electric Light Company crews can be seen working on utility poles in the path of the flow. Also, bulldozers appear to be hard at work in the residential areas below. UPDATE: According to the Hawaii Tribune-Herald, the dozer in the video (image below) is being used to build a 250 foot berm as a last ditch effort to save a home from the lava. Owner Alfred Lee told the newspaper he was not going to give up his property without a fight. 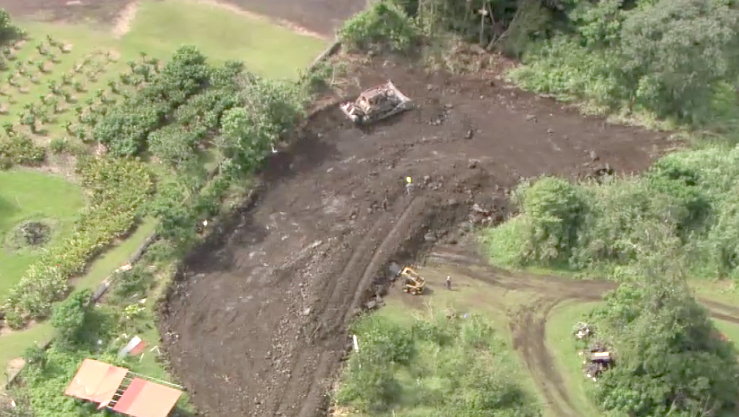 Image from overflight shows a Pahoa resident building aa 250 foot berm with a bulldozer in an attempt to save his home. Taken from video provided by Mick Kalber aboard Paradise Helicopters.