(ABOVE VIDEO) This morning’s Civil Defense message with video from the air by Mick Kalber and footage from the ground courtesy the County of Hawaii. 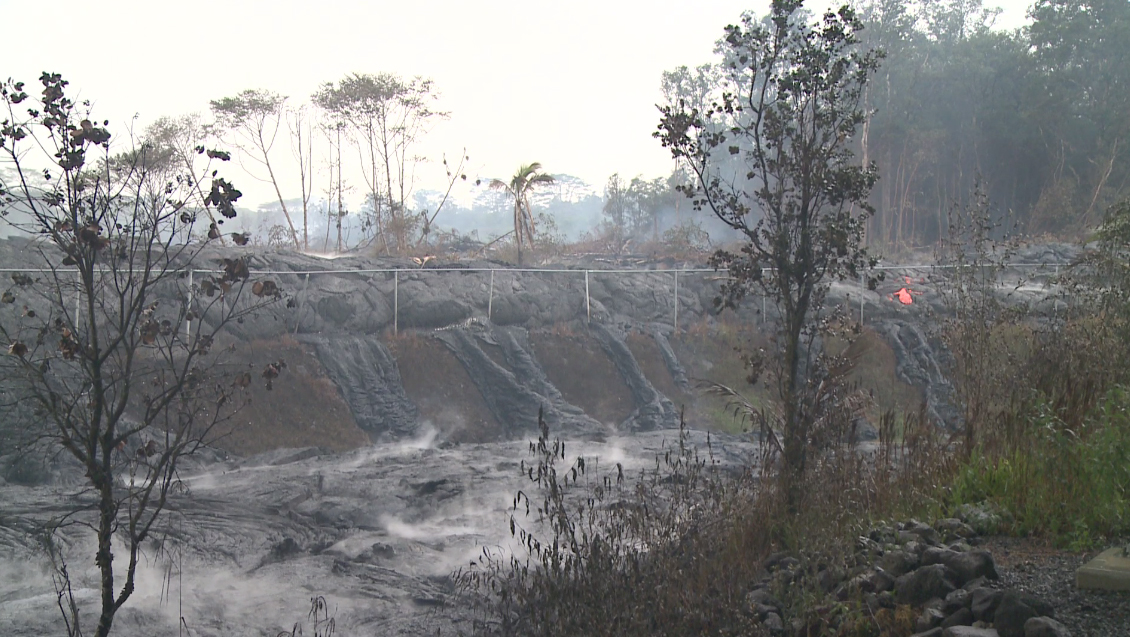 The scene at the transfer station on Friday, courtesy the County of Hawaii.

This afternoon’s assessment shows that several breakouts remain active and continue to advance. The active breakouts are located in the area of the cemetery below Apa’a Street; above Apa’a Street in the area west or upslope of the transfer station; and 300 yards upslope of Apa’a Street. The breakouts currently do not pose an immediate threat to area residents and will be monitored closely. All burning with breakouts is currently limited to vegetation only.

Smoke conditions remain moderate to heavy with a light south wind blowing the smoke in a north northeast direction towards the Ainaloa, Hawaiian Paradise Park and Keaau areas. Smoke conditions may increase in some areas and residents down wind that may be sensitive or have respiratory problems are advised to take necessary precautions and to remain indoors. The weather service has forecasted continued south winds for the next few days.

When the USGS Hawaiian Volcano Observatory releases their evening update, we will share that information here:

Scientists of the USGS Hawaiian Volcano Observatory conducted an overflight of the June 27th lava flow earlier today, November 14, 2014. A few small breakouts were active below Apa`a St./Cemetery Rd., a short distance north of the cemetery. The closest active breakouts to Pāhoa Village Road were approximately 700 meters (0.4 miles) upslope of the road.

A breakout was also active about 5 km (3 mi) downslope from Puʻu ʻŌʻō.

Daily updates about Kīlauea’s ongoing eruptions, recent images and videos of summit and East Rift Zone volcanic activity, and data about recent earthquakes are posted on the HVO Web site at http://hvo.wr.usgs.gov.USGS Hawaiian Volcano Observatory on Nov. 14 at 8:44 p.m. HST 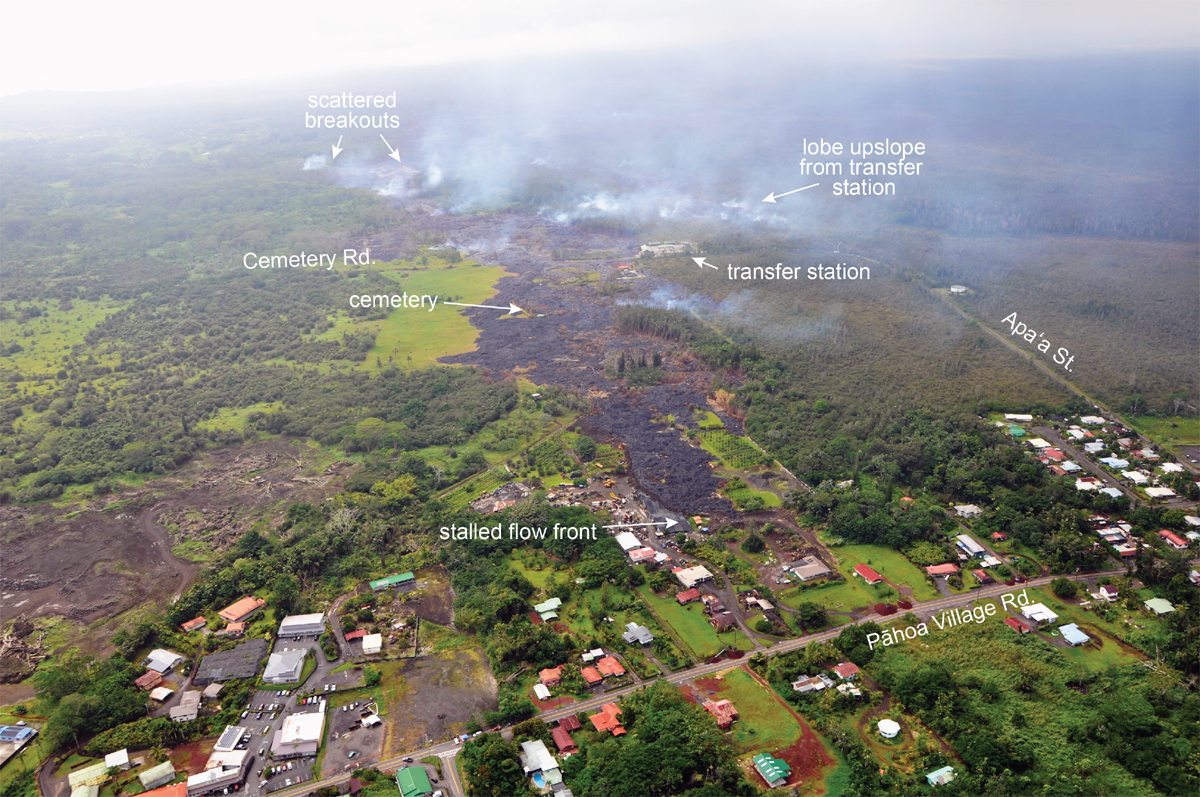 USGS HVO overflight photo taken on Nov. 14 with breakouts and other features labelled. 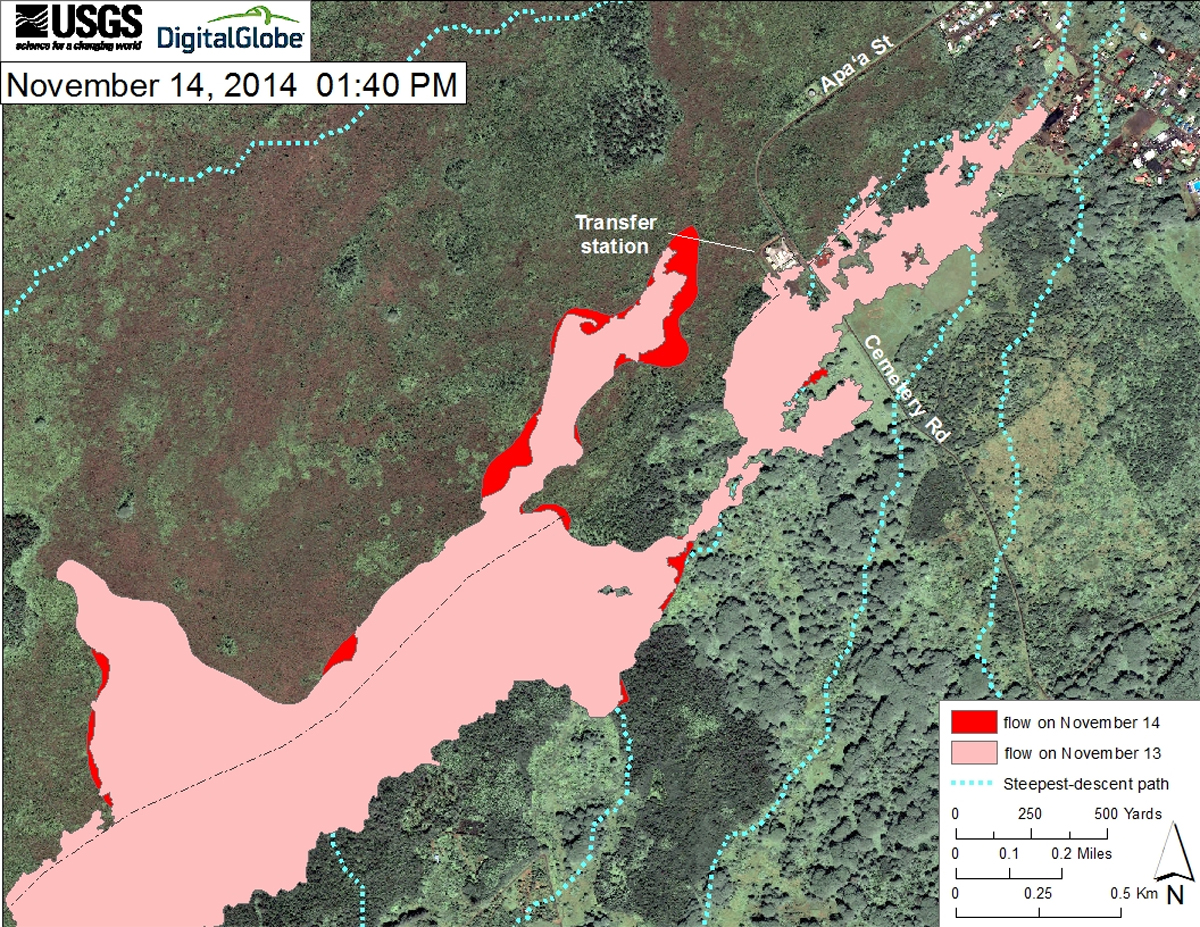 This USGS HVO map uses a satellite image acquired in March 2014 (provided by Digital Globe) as a base at 1:13,000 scale to show the area around the front of the June 27th lava flow. The area of the flow as mapped on November 12 and 13, 2014, is shown in pink, while widening and advancement of the flow as mapped on November 14, at 1:40 PM is shown in red.

These thermal images, produced by USGS HVO, compare activity around the flow front on November 5 and 14, 2014. White and yellow colors show areas of active breakouts. On November 5 relatively few breakouts were active in this portion of the June 27th flow, with a few small breakouts near the cemetery and one breakout a few hundred meters upslope of the transfer station. On November 14, however, scattered breakouts were abundant in this area, with new activity significantly expanding the flow margins around the cemetery and a new lobe active upslope of the transfer station.