The flow front appears to have stalled and there has been no advancement since 4:30 yesterday afternoon.

(ABOVE VIDEO) USGS photo shows a “picturesque” breakout at the narrow section of the flow 0.6 miles behind the tip of the flow.The small but fairly vigorous breakout was active Monday afternoon.

This morning’s assessment shows that the flow front appears to have stalled and there has been no advancement since 4:30 yesterday afternoon. The front or leading edge remains approximately 0.6 miles upslope of the Highway 130 and Pahoa Village Road intersection. Some surface breakouts and activity along both margins was noted upslope of the front however not advancing and current activity does not pose an immediate threat to area communities. Civil Defense and Hawaiian Volcano Observatory personnel are maintaining close observations of the flow. Residents and businesses down slope will be kept informed of any changes in flow activity, advancement, and status. As the flow activity continues to show signs of advancement, businesses in the Pahoa Market Place are taking necessary steps to prepare for a possible evacuation. Motorists are advised to drive with caution and to be prepared for increased traffic and large vehicles in the area.

Smoke conditions in the immediate area were light with light variable winds blowing the smoke in a south/southeast direction. Smoke conditions may increase in some areas and individuals who may be sensitive or have respiratory problems are advised to take necessary precautions and to remain indoors.

The Railroad Avenue alternate access road has been opened for use from 12:00 noon this past Saturday December 20th. This is to allow for motorists to become familiar with the road and traffic flow. Highway 130 remains open and there is no anticipated road closure at this time.

Kīlauea Volcano continues to erupt at its summit and within its East Rift Zone. The tip of a lava flow front consisting of north and south branches was observed to have stalled as of midday Monday. The stalled flow continues to have some surface breakouts behind the flow front as of this morning, according to Civil Defense. Summit tilt, and tilt at at Puʻu ʻŌʻō are both currently flat.

June 27th Lava Flow Observations: HVO, along with Civil Defense, is monitoring a flow front that has been progressing towards the Pāhoa Marketplace. Civil Defense reported this morning that the leading tip of the active flow was still stalled this morning and is currently about 0.6 miles (1.0 km) upslope from the intersection of Highway 130 and Pāhoa Village Rd. Monday’s HVO mid-afternoon overflight first observed the stall, reporting that there were several active lobes breaking out from just behind the stalled tip, up to about 1.0 km (0.6 miles) immediately up slope. Additional breakouts were noted up to 3.8 km (2.4 miles)up slope. Another breakout from the lava tube first observed on December 5, about 2.6 km (1.6 mi) from Puʻu ʻŌʻō was still active yesterday.

Puʻu ʻŌʻō Observations: No significant change in ground tilt has been observed in the past 24 hours, and overall for the last week ground tilt measured at the cone has been minor and deflationary. All other monitoring data indicate no significant changes at Puʻu ʻŌʻō. Seismic tremor is low and steady, and webcams revealed no strong variations in the pattern of glow from degassing vents or the configuration of the crater floor. GPS-measured deformation across the cone has shown no net extension nor contraction since July. The most recent measurement of sulfur dioxide emissions from the East Rift Zone was about 250 tonnes per day on December 19, 2014.

Summit Observations: A tiltmeter at Kīlauea’s summit has recorded essentially flat tilt for the past day. Overall, the trend of summit tilt for the past week has been one of gentle decline. The summit lava lake has shown the usual fluctuations associated with changes in spattering behavior, which are also manifested as variations in tremor amplitudes and gas release. Small amounts of particulate material were carried aloft by the plume. The average emission rate of sulfur dioxide ranged between 3,100 and 6,500 tonnes/day for the week ending on December 16 USGS Hawaiian Volcano Observatory on Dec. 23 at 9:01 a.m. HST 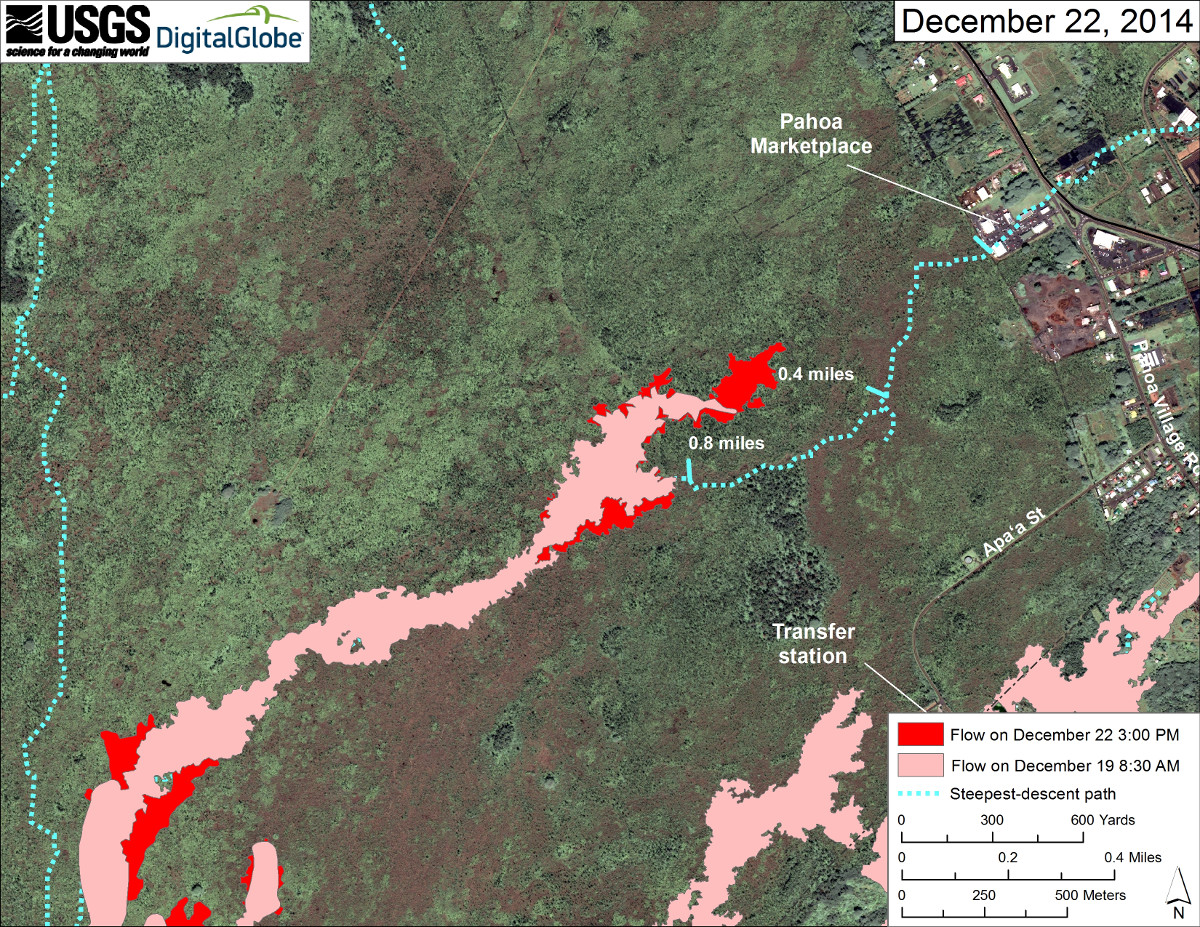 This map uses a satellite image acquired in March 2014 (provided by Digital Globe) as a base to show the area around the front of Kīlauea’s active East Rift Zone lava flow. The area of the flow on December 19 at 8:30 AM is shown in pink, while advancement of the flow as mapped on December 22 at 3:00 PM is shown in red. Advancement of the flow continued at a slower rate, compared to last week, and the flow moved about 265 meters (290 yards) since Friday’s mapping. A southern branch of the flow on this map, following the main steepest-descent path is stalled. The more northerly advancing branch was 30 meters (33 yards) from the fire break road and 675 meters (738 yards) away from the back of the Pāhoa Marketplace, measured in a straight line. Tick marks show distance above Pāhoa Marketplace measured along the main steepest-descent path. The blue line shows the dominant steepest-descent path for the drainage the lava flow is following, calculated from a 1983 digital elevation model (DEM; for calculation details, see http://pubs.usgs.gov/of/2007/1264/). Steepest-descent path analysis is based on the assumption that the DEM perfectly represents the earth’s surface. DEMs, however, are not perfect, so the blue line on this map can be used to infer only an approximate flow paths.USGS Hawaiian Volcano Observatory on Dec. 22 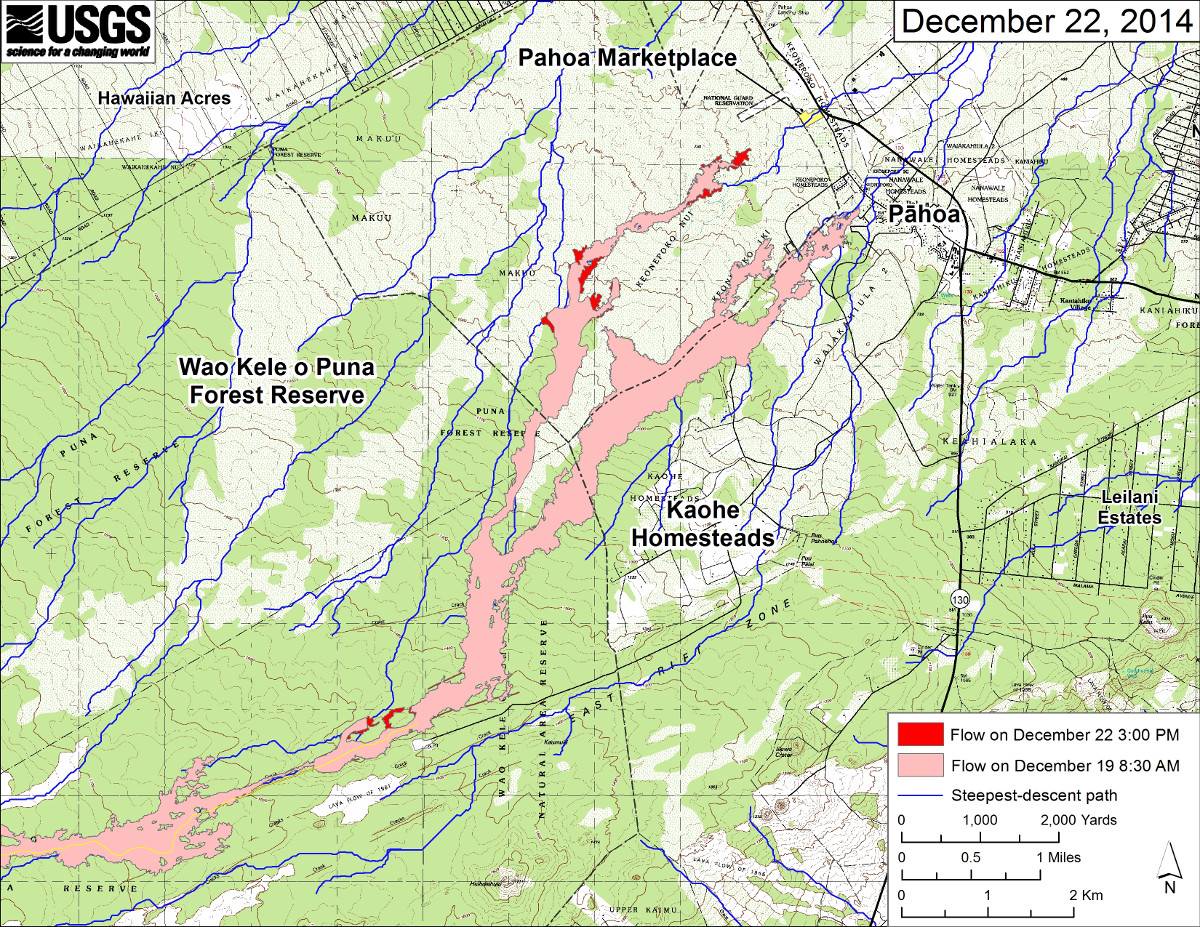 This large-scale map shows the distal part of Kīlauea’s active East Rift Zone lava flow in relation to nearby Puna communities. The area of the flow on December 19 at 8:30 AM is shown in pink, while advancement of the flow as mapped on December 22 at 3:00 PM is shown in red. The leading tip of the flow had slowed, but had also widened and split into two branches. The southern branch has stalled while the northern branch continues to advance downslope toward the Pāhoa Marketplace, and the closest was about 675 meters (738 yards) away. Other breakouts were active between about 2.0-3.0 km (1.2-1.9 miles) behind the tip of the flow and about 8.0 kilometers (5 miles) along the northern side of the crack system near the True/Mid-Pacific geothermal well site. The blue lines show steepest-descent paths calculated from a 1983 digital elevation model (DEM; for calculation details, see http://pubs.usgs.gov/of/2007/1264/). Steepest-descent path analysis is based on the assumption that the DEM perfectly represents the earth’s surface. DEMs, however, are not perfect, so the blue lines on this map can be used to infer only approximate flow paths. The yellow line marks the mapped extent of the active lava tube.USGS Hawaiian Volcano Observatory on Dec. 22