(ABOVE VIDEO) USGS Hawaiian Volcano Observatory geologist Mike Poland gives a short update on the latest activity on the June 27 lava flow, part of a Volcano Awareness Month Talk Story that Big Island Video News will feature in its entirety. 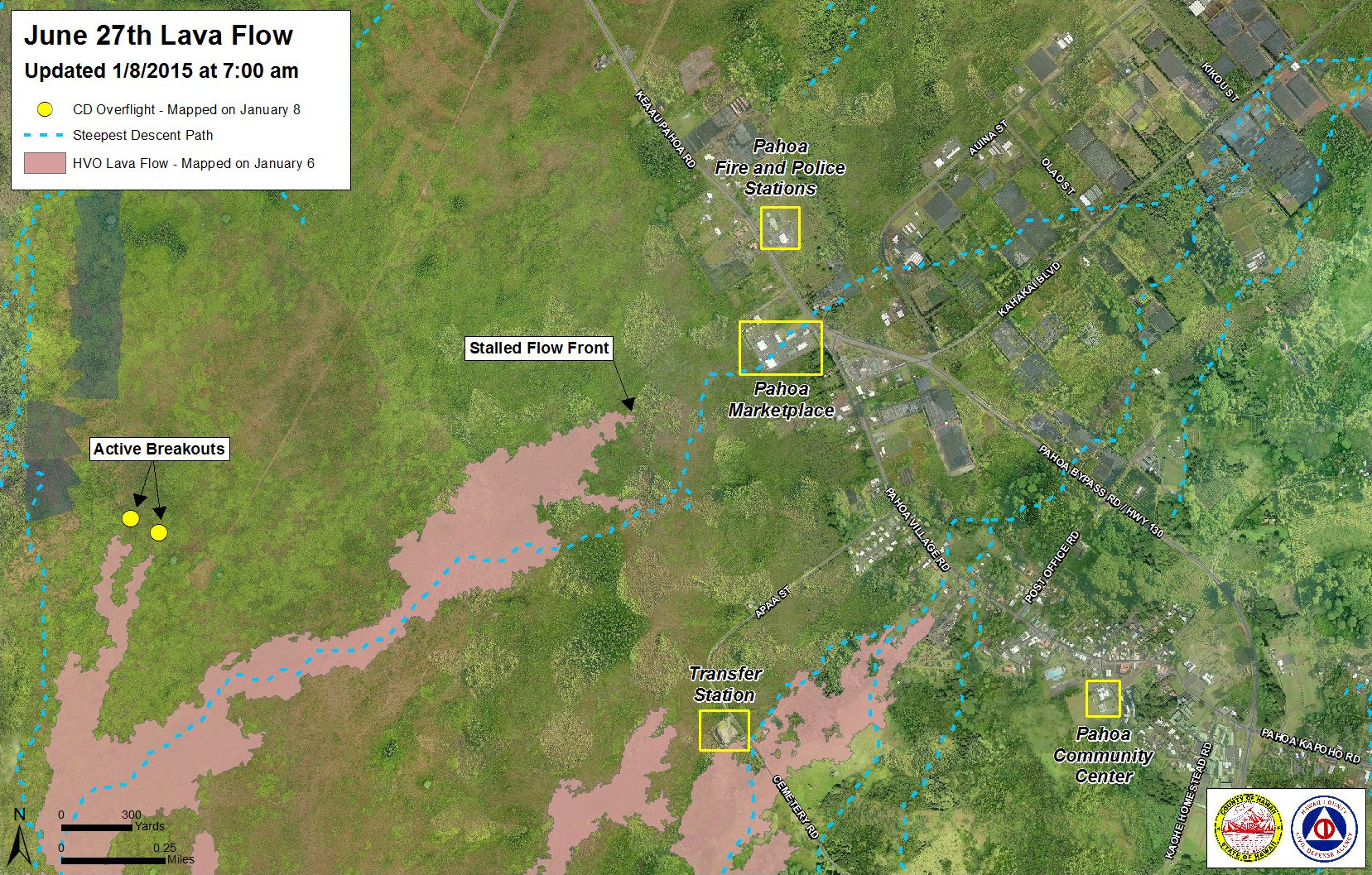 This morning’s assessment shows that the flow front and south margin breakout remain stalled and there has been no advancement since last Friday. The front or leading edge remains 0.5 miles upslope of the Highway 130 and Pahoa Village Road intersection. Some surface activity continues approximately 300 yards above or upslope of the flow front. Two breakouts along the north margin approximately 1-1.5 miles upslope or behind the flow front remain active and have advanced approximately 50 yards since yesterday in a north/northeast direction. Other surface breakouts and activity along both margins continues upslope however, current activity does not pose an immediate threat to area communities. Civil Defense and Hawaiian Volcano Observatory personnel are maintaining close observations of the flow. Residents and businesses down slope will be kept informed of any changes in flow activity, advancement, and status.

The Railroad Avenue Alternate Access Road has been closed to all traffic effective 12:00 noon yesterday, Wednesday January 7th. This closure is necessary to allow for road maintenance and to preserve the road until such time that it is needed. We appreciate everyone’s cooperation and understanding with this closure and assure the community that the alternate access roads will be opened well in advance of any threat or impact of the lava flow.

The hours of operation at the public lava viewing area at the Pahoa Transfer station will be adjusted effective Friday January 9th. The new hours of operation will be from 10:00am to 4:30pm daily. This adjustment is based on the peak hours of visitation. We apologize for any inconvenience this change of operations may cause. Hawaii County Civil Defense on Jan. 8 at 7:45 a.m. HST

Kīlauea Volcano continues to erupt at its summit and within its East Rift Zone. In the East Rift Zone, the tip of the June 27th lava flow remained stalled; however, active surface breakouts up slope of the front continued. A narrow flow lobe about 2.5 km (1.6 mi) upslope of Pahoa Marketplace continued to advance toward the north-northeast. This morning, Civil Defense reported that this lobe has advanced 46 m (50 yards) since yesterday. Minor changes in ground tilt were recorded over the past day at the summit and at Puʻu ʻŌʻō.

June 27th Lava Flow Observations: This morning, Civil Defense confirmed that the flow tip remains stalled approximately 800 m (0.5 miles or 880 yards) from the intersection of Highway 130 and Pāhoa Village Road. However, a 2-fingered narrow flow lobe about 2.5 km (1.6 mi) upslope of Pahoa Marketplace continued to advance “advanced approximately 50 yards since yesterday” toward the north-northeast. This lobe has entered a drainage that leads to the steepest-descent path that crosses Highway 130 about 1 km (0.6 mi) south of the Makuʻu Farmer’s Market, but the flow is still 3.5 km (2.2 mi) uplsope from Highway 130 and moving slowly. Other areas of surface lava were also active 0.9 – 3.5 km (0.5 – 2 mi) upslope of the Pāhoa Marketplace. Breakouts further upslope, near the True/Mid-Pacific geothermal well pad, are also active. The VLF line on the upper June 27th lava tube showed a small decrease from the previous measurement on December 30; the average cross-sectional area of the lava stream was around 1.7 square meters (2 square yards).

Puʻu ʻŌʻō Observations: About 0.6 microradians of deflation were recorded by a tiltmeter on the north flank of Puʻu ʻŌʻō cone since early yesterday afternoon. All other monitoring data indicated no significant changes at Puʻu ʻŌʻō. The most recent measurement of sulfur dioxide emissions from all East Rift Zone vents was about 250 tonnes per day on December 19, 2014.

Summit Observations: A minor amount of inflationary ground tilt (~0.2 microradians/day) was recorded at the summit over the past two days. The summit lava lake has shown minor fluctuations associated with changes in spattering behavior, which are also manifested as variations in tremor amplitudes and gas release. The lava level was measured at around 48 m (160 ft) below the lip of the Overlook crater Tuesday morning. Small amounts of particulate material were carried aloft by the plume. The average emission rate of sulfur dioxide was around 5,400 tonnes/day for the week ending on January 6.USGS Hawaiian Volcano Observatory on Jan. 8 at 8:33 a.m. HST