Concerns raised in Maku'u over lava flow and the WWII-era Popoki Target Area.

(Big Island Video News) HAWAII ISLAND – During a media conference call concerning the June 27 Lava Flow on Wednesday, Hawaii County Civil Defense administrator Darryl Oliveira talked about recent discussions with the Department of Hawaiian Home Lands regarding Maku’u. Scientists say lava could be headed in that direction. A slow moving lobe of lava is in a drainage area leading to the steepest-descent path that crosses Highway 130 about six tenths of a mile south of the Makuʻu Farmer’s Market. Oliveira said the discussion with DHHL included concerns over the 640 acres formerly known as Popoki Target Area, which was used by the Navy as a target practice area during World War II. Deteriorating air-to-ground practice bombs have been found on site.

The Department of Hawaiian Home Landsiy describes the Maku’u area in detail in a December 2010 Regional Plan. This map is in the document. 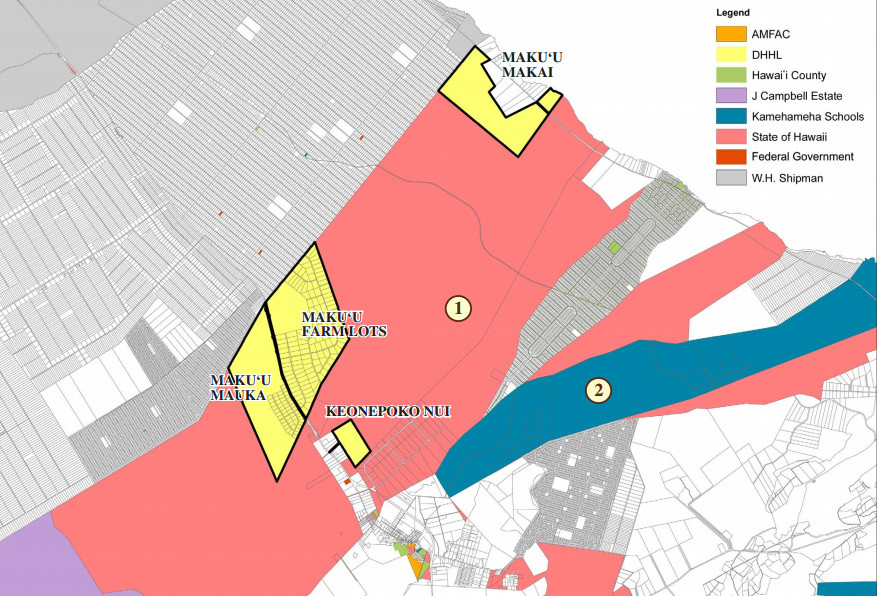 Here is the latest USGS Hawaiian Volcano Observatory lava flow map, showing the lines of steepest-descent. On Wednesday, civil defense reported no advance on the lobe headed towards the Maku’u area. 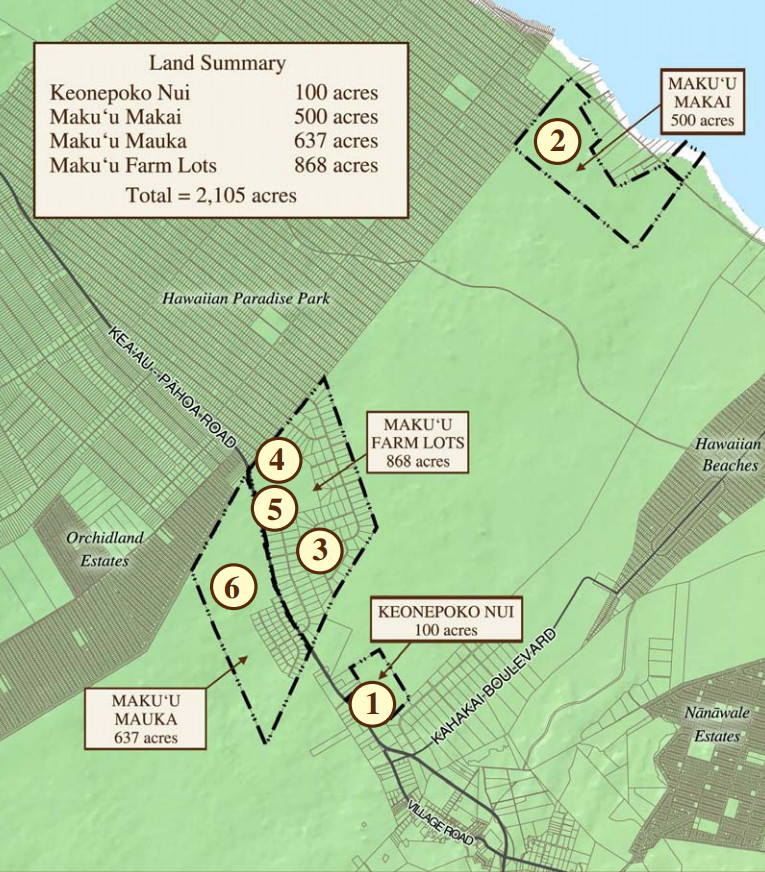 The areas of concern are located in the Maku‘u Farm Lots. 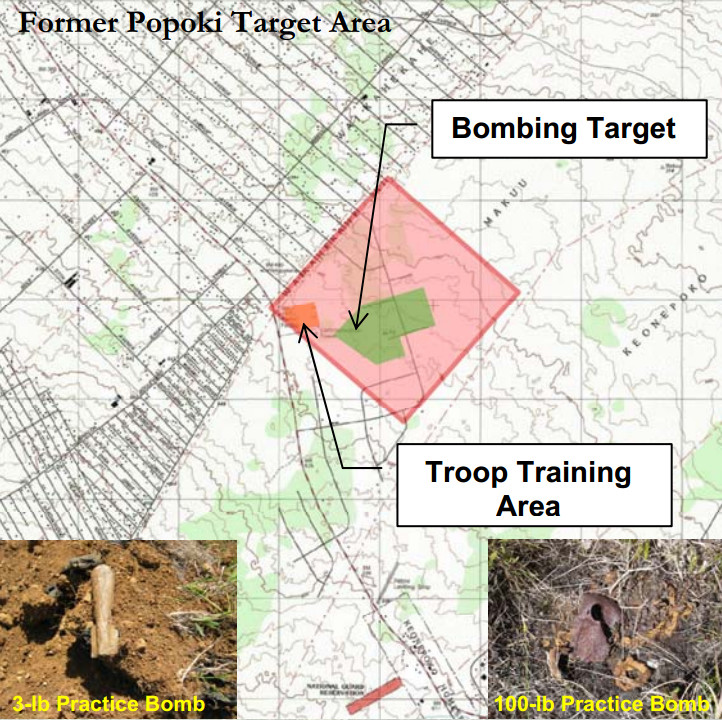 The Formerly Used Defense Site (FUDS) property formerly known as the Popoki Target Area occupies 640 acres and is located on the eastern side of the Big Island, at Makuu Popoki Halona, District of Puna. The site is located just off of Keaau Pahoa Road, Highway 130, between the towns of Keaau and Pahoa approximately 7 miles southeast of Keaau next to the Hawaiian Paradise Park.

Approximately 640 acres were acquired by the U.S. Navy through a sublease (date unknown), either with W.H. Shipman, Ltd., or H. Blackshear, then executor of Shipman Estate. The site was reportedly used by the Navy as a target practice area during World War II. Though records could not be found to document such activity, ground reconnaissance revealed deteriorating air-to-ground practice bombs on site. The lease was cancelled on November 1, 1945.

The land within the FUDS property is owned by the State of Hawaii’s Department of Hawaiian Homeland and Department of Land and Natural Resources. There are two Areas of Concern within the FUDS property that the U.S. Army Corps of Engineers will be investigating and clearing Munitions and Explosives of Concern (MEC), Munitions Debris (MD) and Munitions Constituents (MC). Site work will start in 2011 and is estimated to be completed in 2012.U.S. Army Corps of Engineers 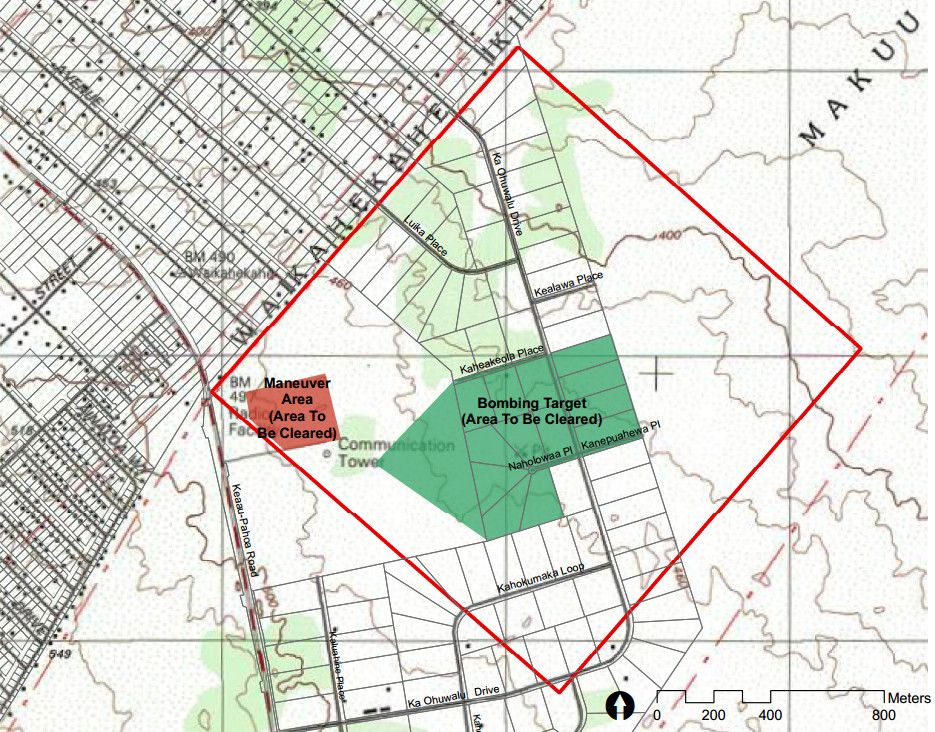