(ABOVE VIDEO) This afternoon’s Civil Defense conference call with video of recently published maps and video from an overflight yesterday (Jan. 14)

This morning’s helicopter over flight and assessment will be delayed however a preliminary ground assessment shows that the original flow front and south margin breakout remain stalled and there has been no advancement over the past week. A breakout along the north side of the flow is active and has advanced down slope to an area near the stalled front. Two breakouts along the north margin approximately 1-1.5 miles upslope or behind the flow front remain active and a more thorough assessment will be performed later today.

The brush fire that started as a result of the lava flow is contained within the fire breaks and activity was limited to hot spots and smoldering only. Hawaii Fire Department personnel and equipment are on scene and monitoring the fire conditions. There is currently no fire threat to area residents and properties. 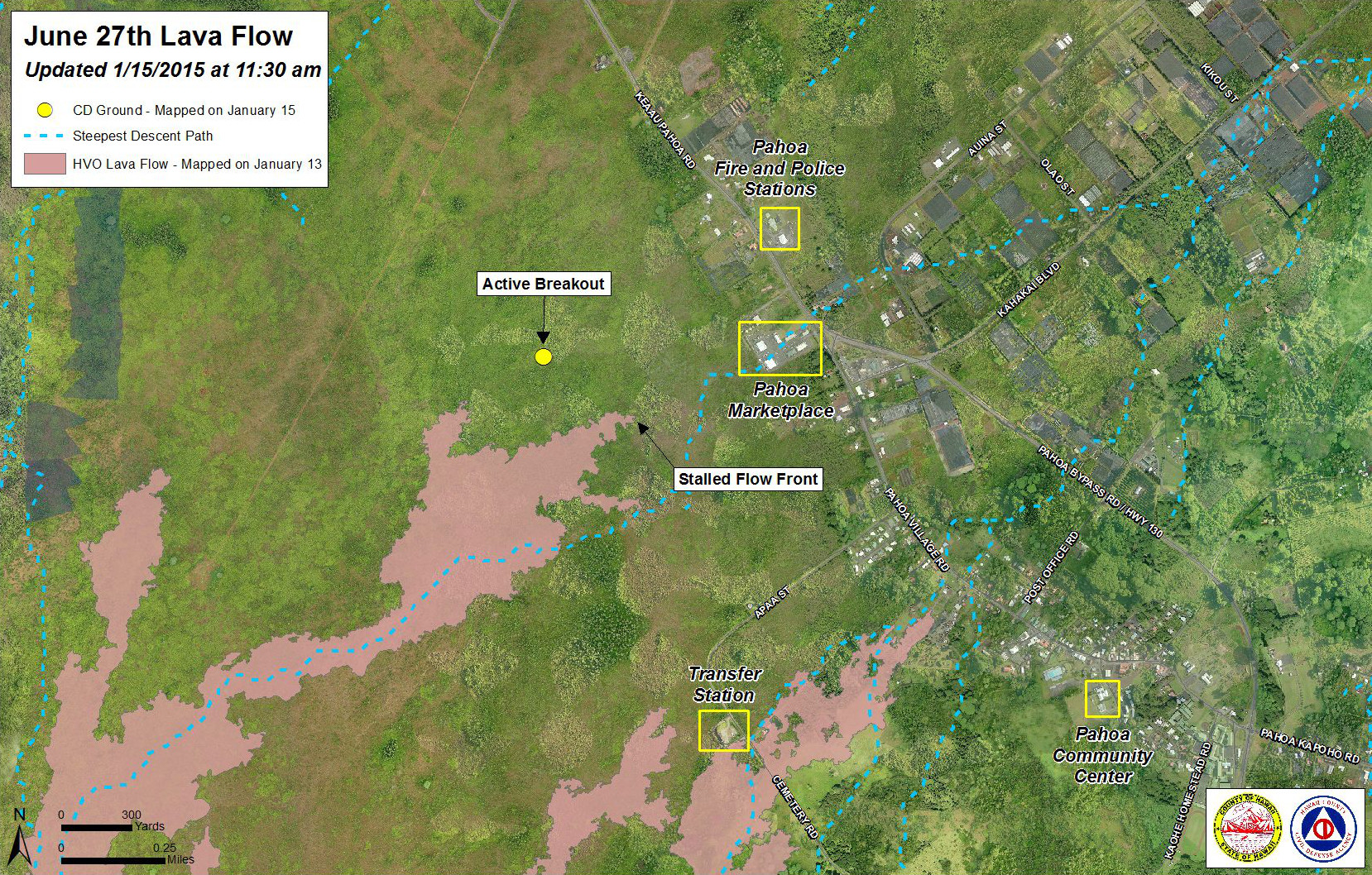 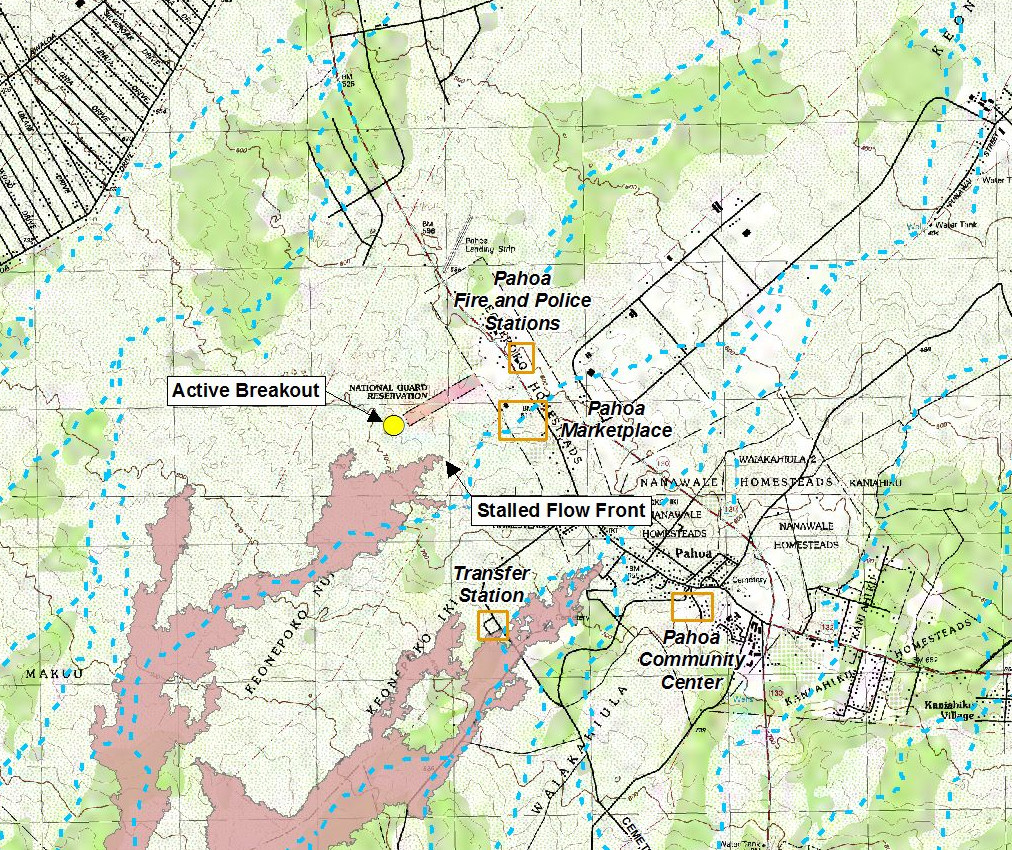 Kīlauea Volcano continues to erupt at its summit and within its East Rift Zone. In the East Rift Zone, the tip of the June 27th lava flow remained stalled; however, active surface breakouts up slope of the front continued. One of these breakouts has advanced to an area near the stalled front according to a Civil Defense assessment this morning.

June 27th Lava Flow Observations: The flow that advanced toward Pahoa Marketplace in past weeks remained stalled approximately 800 m (0.5 miles or 880 yards) from the intersection of Highway 130 and Pāhoa Village Road, however, breakouts are active upslope of the stalled flow tip. As of this morning, the lobe that recently brokeout about 700 m (765 yd) upslope of the stalled tip had advanced to an area near the stalled front, according Civil Defense.

On Tuesday’s overflight, HVO scientists observed additional breakouts scattered from 1.7 to 3 km upslope of the flow tip, and the long, narrow lobe moving north-northeast in this area was active. This lobe had advanced about 45 m/day (50 yd/day) during the past week. It is in a drainage area leading to the steepest-descent path that crosses Highway 130 about 1 km (0.6 mi) south of the Makuʻu Farmer’s Market, but the flow is still about 3 km (1.9 mi) uplsope from Highway 130 (straight-line distance to intersection of highway 130 and steepest descent line) and moving slowly.

Small breakouts were also active in an area of persistent activity in the crack system near the True/Mid-Pacific geothermal well pad about 7 km (4 mi) upslope from Pāhoa; no active breakouts were observed upslope of this area.

Puʻu ʻŌʻō Observations: The tiltmeter on the north flank of Puʻu ʻŌʻō cone continued to record the very weak inflation that has been observed over the past 5+ days. All other monitoring data indicated no significant changes at Puʻu ʻŌʻō. The most recent measurement of sulfur dioxide emissions from all East Rift Zone vents was about 200 tonnes per day on January 7.

Summit Observations: Very slight inflationary tilt was recorded at the summit since yesterday morning. The summit lava lake displayed minor lava level fluctuations associated with changes in spattering behavior, which are also manifested as variations in tremor amplitudes and gas release. Small amounts of particulate material were carried aloft by the plume. The average emission rate of sulfur dioxide was around 5,400 tonnes/day for the week ending on January 6USGS Hawaiian Volcano Observatory on Jan. 15 at 9:04 a.m. HST