A fine of $23,700 has been imposed for the alleged violations

(Big Island Video News) PUNA, Hawaii – Puna Geothermal Venture has been fined by the state of Hawaii for incidents that occurred on August 7th, the night of Hurricane Iselle, and in the days following.

Before making landfall as a Tropical Storm, Iselle lashed East Hawaii with high winds, toppling trees across Puna. Some of those trees took out transmission lines at the Puna Geothermal Plant in Pohoiki, knocking the facility offline, and creating the need for an emergency steam release. Some in the surrounding community who were already trapped by the storm say they suffered as a result of the facility’s actions.

The Department of Health is charged with ensuring compliance at the geothermal facility. At the time, DOH was criticized for their inaction. Now, over five months later, and the health department has cited PGV for what happened the night of the storm.

On January 15, the state announced it has issued a Notice and Finding of Violation and Order to Puna Geothermal Venture for operational, emission and notification violations relating to the unabated release of 39 pounds of hydrogen sulfide on August 7th. The health department’s Clean Air Branch says PGV failed to submit a written report in the allotted five days, and also failed to operate three H2S monitoring stations in the seven days that followed.

A penalty of $23,700 has been assessed for the alleged violations. PGV may request a hearing to contest the violation.

In light of the state’s citation, we revisit this heated discussion held a few weeks after the Aug. 7 incident. The Puna Pono Alliance – watchdogs of the geothermal facility in Pohoiki – had both PGV and health department officials on the hotseat.

Snapshot of the official DOH Notice and Finding of Violation: 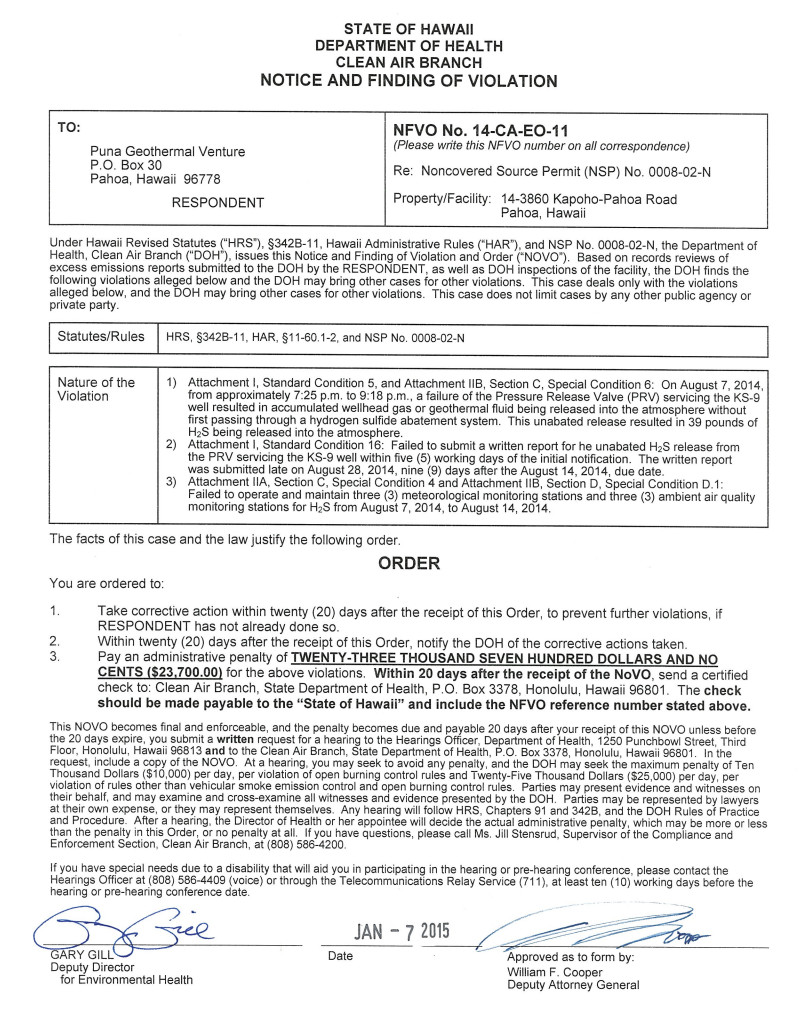