The north breakout has advanced 120 yards since yesterday and is located 0.4 miles from Highway 130

(ABOVE VIDEO) Video from an overflight filmed Friday by Mick Kabler mixed with audio from portions of a media conference call from the same day. NOTE video reflects observations made Friday, January 17. Since this time the breakout has advanced over 100 additional yards. 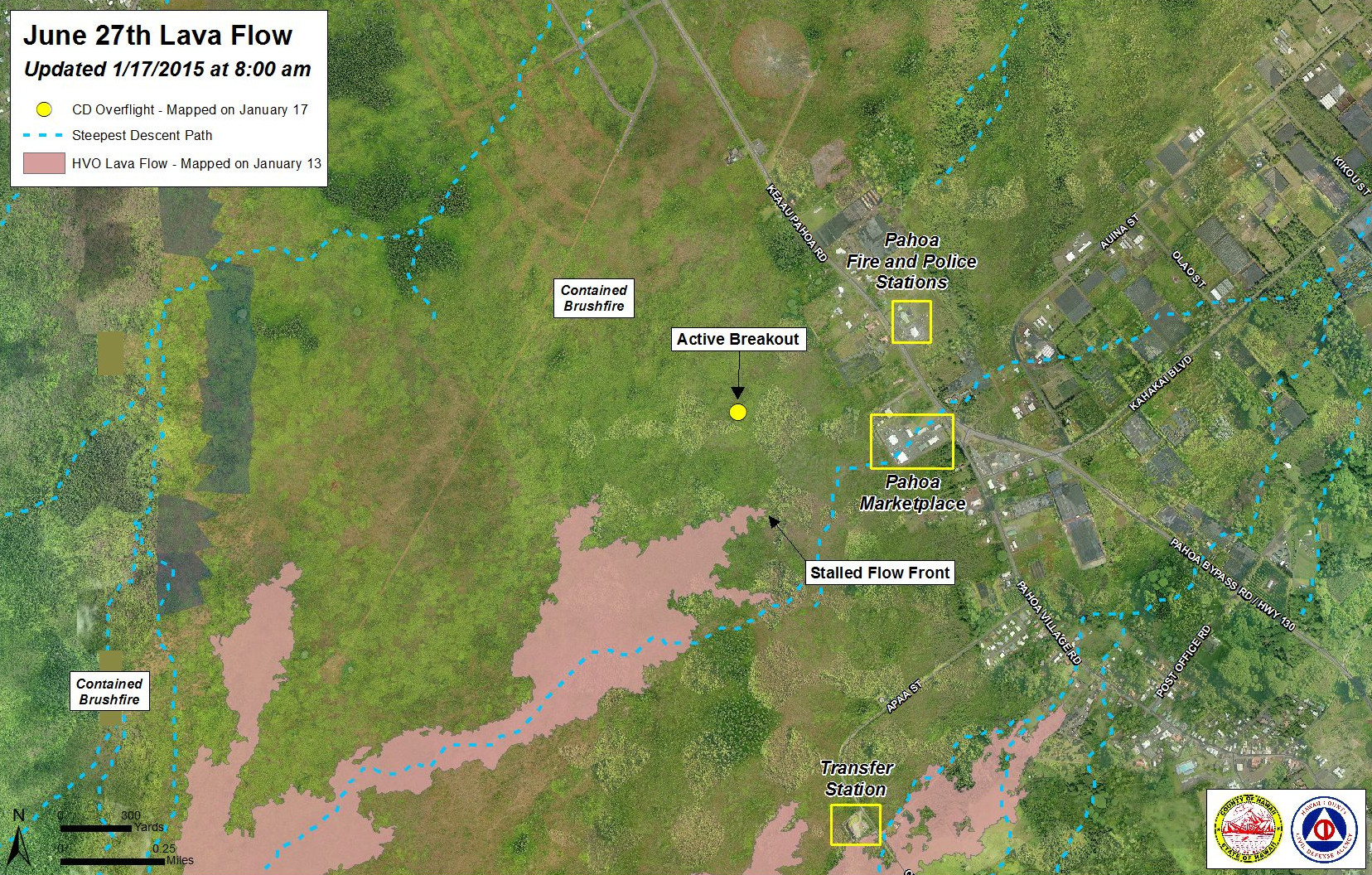 This morning’s assessments shows that the original flow front and south margin breakout remain stalled. The breakout along the north side of the flow remains active and has advanced down slope below an area near the stalled front. This current active down slope breakout has advanced approximately 120 yards since yesterday. The leading edge or front of this breakout is located 0.4miles from the area of Highway 130 to the west or mauka of the Pahoa Police and Fire Stations. Two other breakouts along the north margin approximately 1-1.5 miles further upslope or behind the flow front remain active however sluggish and showing little signs of advancement. The Hawaii County Civil Defense Agency and Hawaiian Volcano Observatory are maintaining close observations of the flow. All current activity does not pose a threat to area communities and residents and businesses down slope will be informed of any changes in flow activity and advancement.

With the ongoing dry weather conditions, brush fire activity related to the lava flow is likely to continue. Hawaii Fire Department personnel and equipment are on scene and monitoring the fire conditions. All fires that occurred are contained within the fire break perimeters and additional work is being done to improve fire break conditions. There is currently no fire threat to area residents and properties.

Kīlauea Volcano continues to erupt at its summit and within its East Rift Zone. In the East Rift Zone, a breakout from behind the former, stalled front had become the leading edge of the of the June 27th lava flow by yesterday afternoon, when HVO geologists mapped the flow on the ground. At that time, the flow was approximately 800 m (0.5 mi) from Highway 130; Civil Defense reports that this flow is 650 m (0.4 mi) from the highway this morning, having advanced 110 m (120 yd) since yesterday. Breakouts upslope were also active.

June 27th Lava Flow Observations: The flow lobe that recently broke out about 700 m (765 yd) upslope of the stalled tip has advanced beyond the former front. This new leading edge advanced about 110 m (120 yd) since yesterday and is now about 650 m (0.4 mi) from the highway, in the vicinity of the fire and police stations according to this morning’s report from Hawai`i County Civil Defense..

The northern flow lobe that broke out from the main flow about 1.5 miles upslope of the tip is also active along its margins and in its interior, but is moving sluggishly. It is in a drainage area leading to the steepest-descent path that crosses Highway 130 about 1 km (0.6 mi) south of the Makuʻu Farmer’s Market.

Summit Observations: A small DI event was recorded at the summit starting yesterday afternoon. Deflation turned to inflation at about 4:00 this morning and the summit is currently reinflating. The summit lava lake displayed minor lava level fluctuations associated with changes in spattering behavior, which are also manifested as variations in tremor amplitudes and gas release. Small amounts of particulate material were carried aloft by the plume. The emission rate of sulfur dioxide ranged from around 4,500 to 7,600 tonnes/day during the week ending January 13.USGS Hawaiian Volcano Observatory on Jan. 17 at 9:21 a.m. HST