(ABOVE) View from a Monday morning overflight aboard Paradise Helicopters by Mick Kalber. In the foreground is Highway 130, with the stalled flow fronts behind. On Tuesday, the northern leading edge advanced another 15 yards downslope. 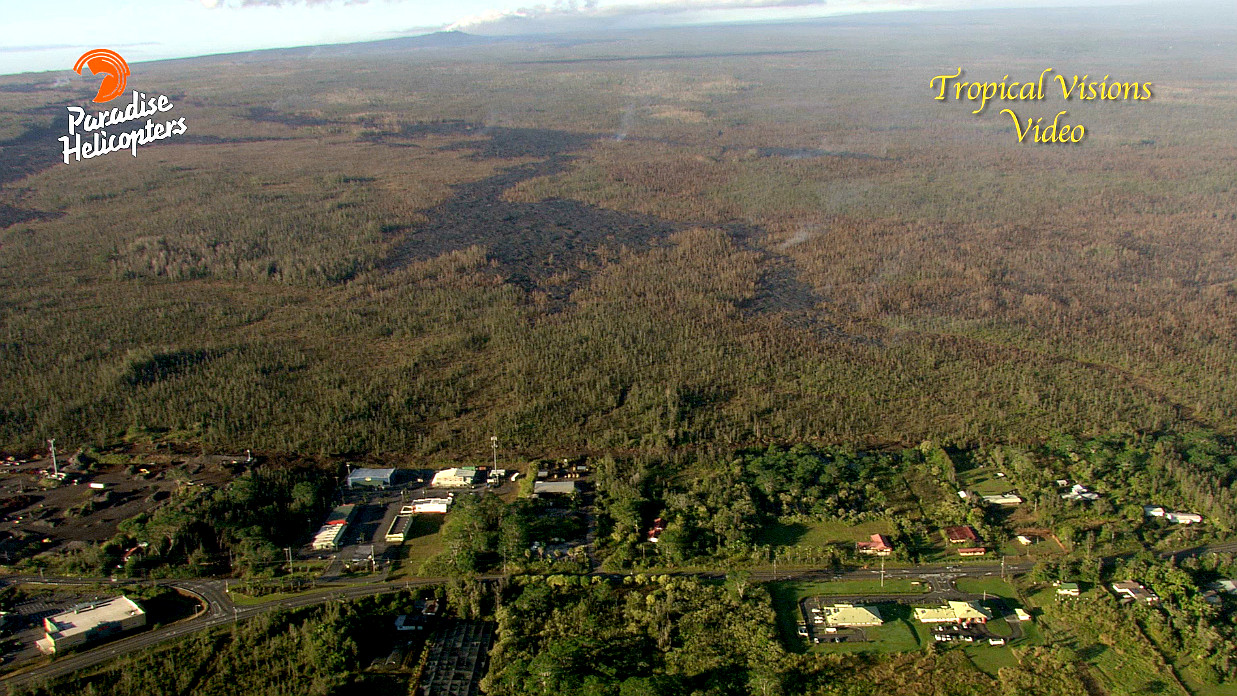 Sluggish flow front filmed from above by Mick Kalber (Jan. 19) 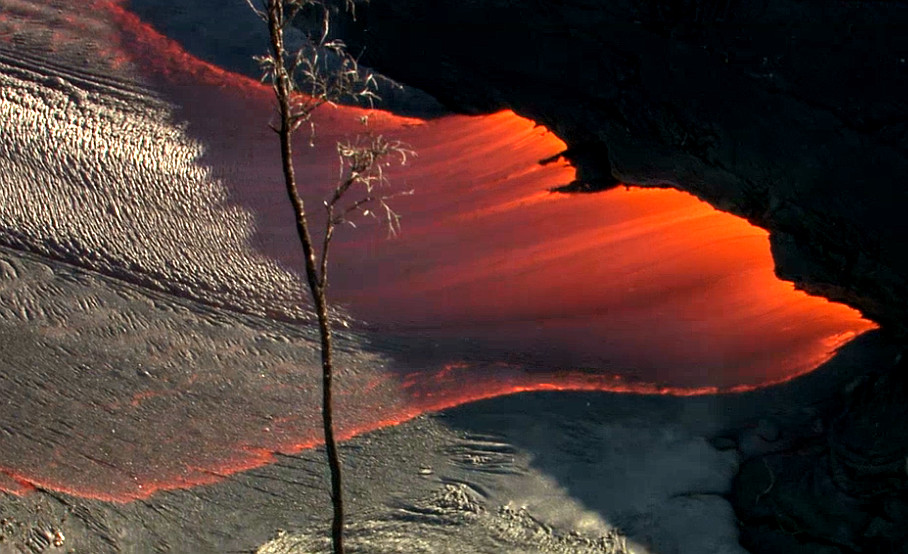 This vigorous breakout was captured on camera about 1 to 1.5 miles upslope of the flow front by Mick Kalber on Monday morning. 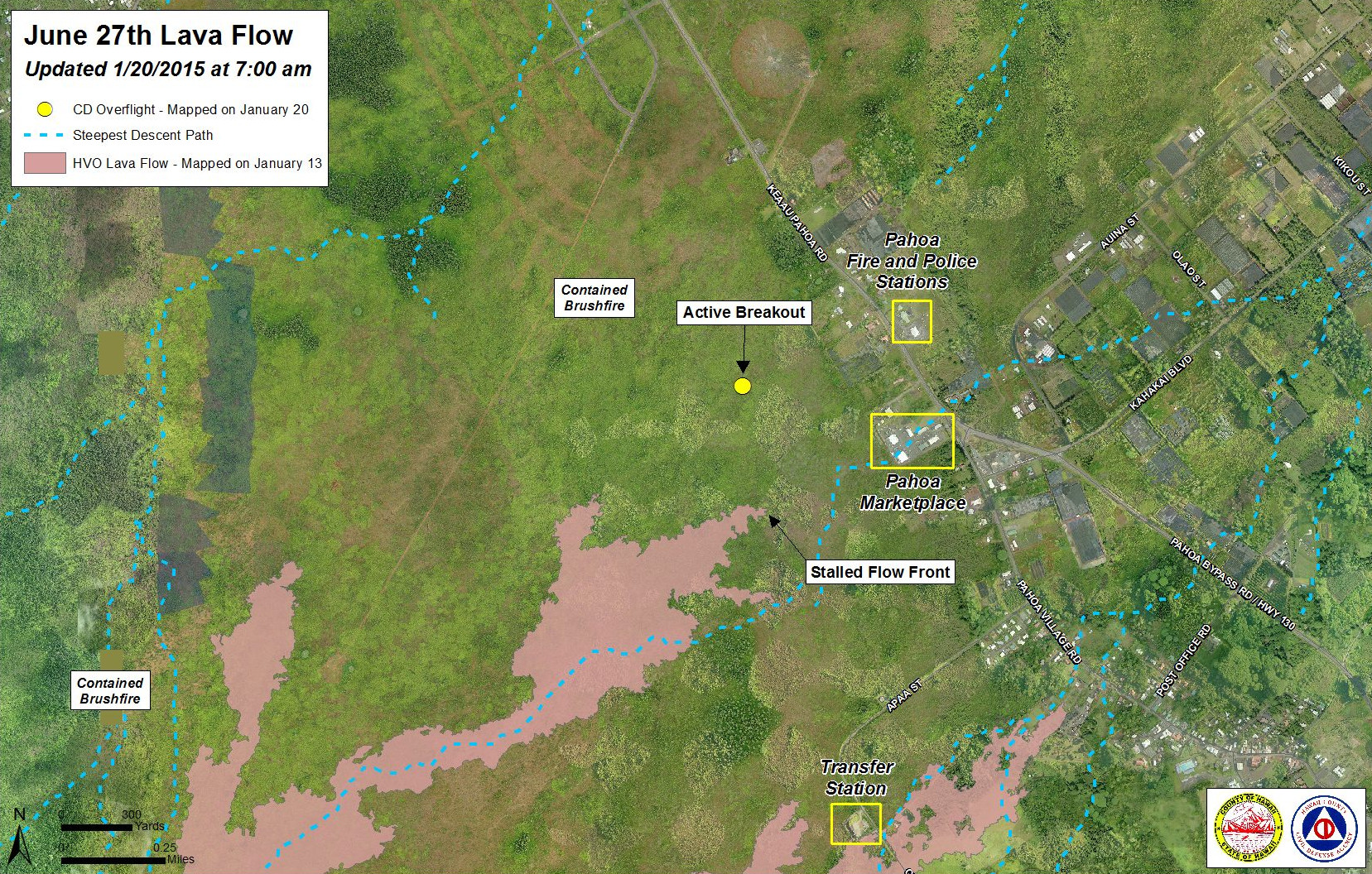 This morning’s assessment shows that the original flow front and south margin breakout remain stalled. The breakout along the north side of the flow continues to be active however very sluggish has advanced 15 yards since yesterday. The leading edge or front of this breakout remains 0.4 miles from the area of Highway 130 to the west or mauka of the Pahoa Police and Fire Stations. Two other breakouts along the north margin approximately 1-1.5 miles further upslope or behind the flow front remain active however sluggish and showing little signs of advancement. A number of other breakouts along both margins of the flow were observed however all current activity does not pose an immediate threat to area communities. The Hawaii County Civil Defense Agency and Hawaiian Volcano Observatory are maintaining close observations of the flow. Residents and businesses down slope will be informed of any changes in flow activity and advancement.

Smoke conditions were light to moderate with a light northeast wind blowing the smoke in a southwest direction. Smoke conditions may increase in some areas and individuals who may be sensitive or have respiratory problems are advised to take necessary precautions and to remain indoors.

Kīlauea Volcano continues to erupt at its summit and within its East Rift Zone. In the East Rift Zone, the breakout that had become the leading edge of the June 27th lava flow was active, but has been moving sluggishly since Saturday night. It advanced approximately 14 m (15 yd) over the last day, according to the Civil Defense assessment this morning. The leading edge remains approximately 650 m (0.4 mi) from Highway 130. Numerous breakouts were also active upslope.

June 27th Lava Flow Observations: According to this morning’s report from Hawai`i County Civil Defense, the breakout from the June 27th lava flow that is furthest downslope slowly advanced about 14 m (15 yd) since yesterday. The tip is still about 650 m (0.4 mi) from the highway, in the vicinity of the fire and police stations.

Civil Defense also reports numerous scattered breakouts upslope. The northern flow lobe that broke out from the main flow about 1.5 miles upslope of the tip was also active along its margins and in its interior, but was moving sluggishly during HVO’s mapping on Friday. It is in a drainage area leading to the steepest-descent path that crosses Highway 130 about 1 km (0.6 mi) south of the Makuʻu Farmer’s Market.

Puʻu ʻŌʻō Observations: The tiltmeter on the north flank of Puʻu ʻŌʻō cone recorded very slight inflation yesterday, but no significant change in tilt since about midnight. All other monitoring data indicated no significant changes at Puʻu ʻŌʻō. The most recent measurement of sulfur dioxide emissions from all East Rift Zone vents was about 200 tonnes per day on January 7.

Summit Observations: The summit began deflating at about 05:00 this morning; most likely this is the start of a DI event. The summit lava lake was approximately 46 m below the rim of Halemaʻumaʻu yesterday morning and has not changed appreciably to this morning. The lake displayed minor lava level fluctuations associated with changes in spattering behavior, which are also manifested as variations in tremor amplitudes and gas release. Small amounts of particulate material were carried aloft by the plume. The emission rate of sulfur dioxide ranged from around 4,500 to 7,600 tonnes/day during the week ending January 13.USGS Hawaiian Volcano Observatory on Jan. 20 at 8:46 a.m. HST