(Big Island Video News) PUNA, Hawaii – The latest activity on the June 27 lava flow was detailed during a media conference call on Tuesday. Hawaii County Civil Defense administrator Darryl Oliveira described a sluggish, disorganized flow. The active north breakout advanced only 15 yards since yesterday. The lobe is still located 0.4 miles from Highway 130 to the west or mauka of the Pahoa Police and Fire Stations.

Also on the call, scientists with the USGS Hawaiian Volcano Observatory provided insight on a vigorous breakout filmed on Monday that has since slowed down.

Brush fires in Niaulani area have slowed to a few smoldering hot spots. Within the last 24 hour period with the help of light rain Monday afternoon and evening, no significant hot spots or smoke were noted. The leading edge of the lava had also stalled in that period. At 1730 hrs, Tuesday, January 20, 2015, per the Battalion Chief on duty, recall personnel demobilized.Hawaii County Fire Dept. dispatch on Jan. 20 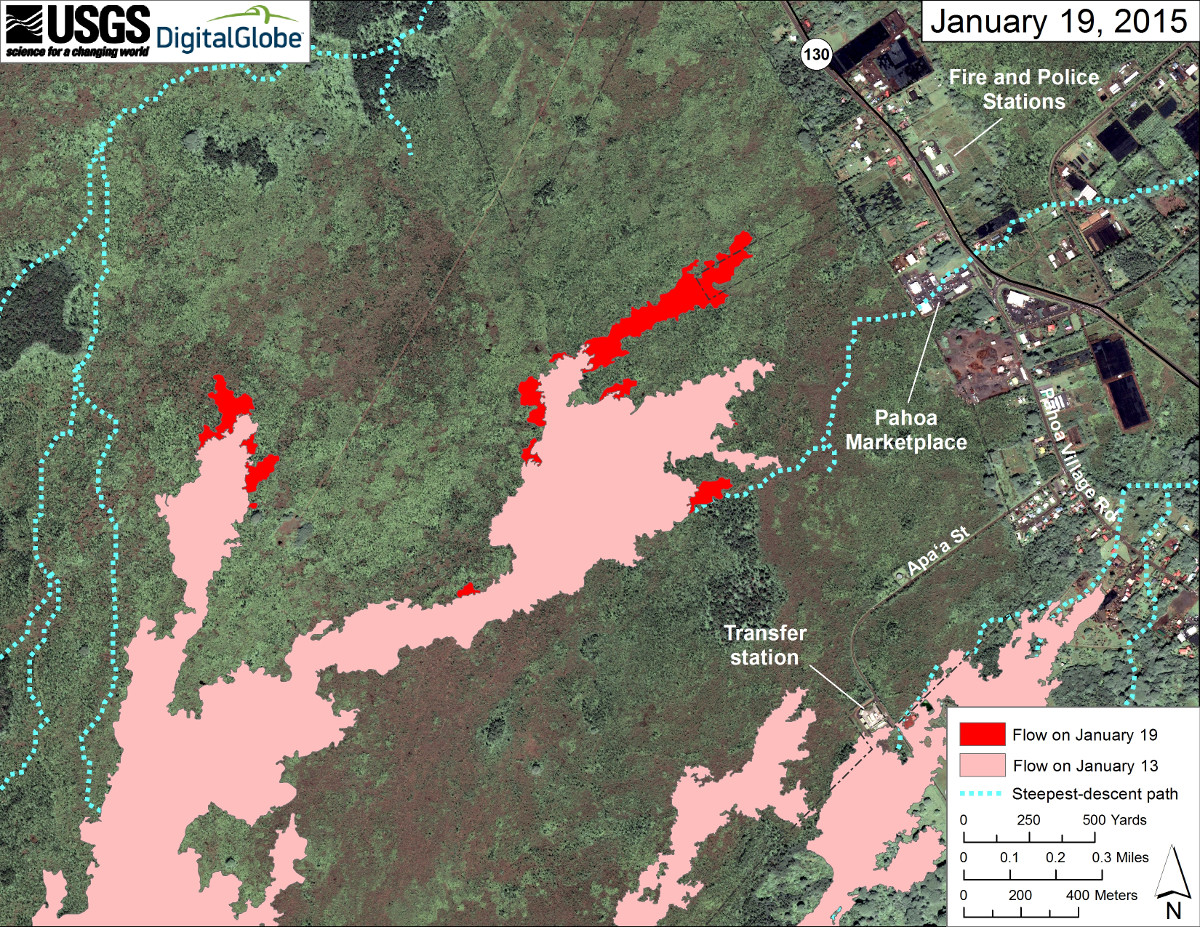 This large-scale map uses a satellite image acquired in March 2014 (provided by Digital Globe) as a base to show the area around the front of Kīlauea’s active East Rift Zone lava flow. The area of the flow on January 13 is shown in pink, while widening and advancement of the flow as determined from satellite imagery and aerial photography on January 19 is shown in red. The most distal active portion of the flow at that time was approximately 600 meters (0.4 miles) from Highway 130. Overall the activity has been sluggish and comprised of scattered breakouts and oozing pāhoehoe toes.

The blue lines show steepest-descent paths calculated from a 1983 digital elevation model (DEM; for calculation details, see http://pubs.usgs.gov/of/2007/1264/). Steepest-descent path analysis is based on the assumption that the DEM perfectly represents the earth’s surface. DEMs, however, are not perfect, so the blue lines on this map can be used to infer only approximate flow paths. USGS Hawaiian Volcano Observatory on Jan. 19