The lava flow front has not advanced and all activity was limited to areas further upslope. 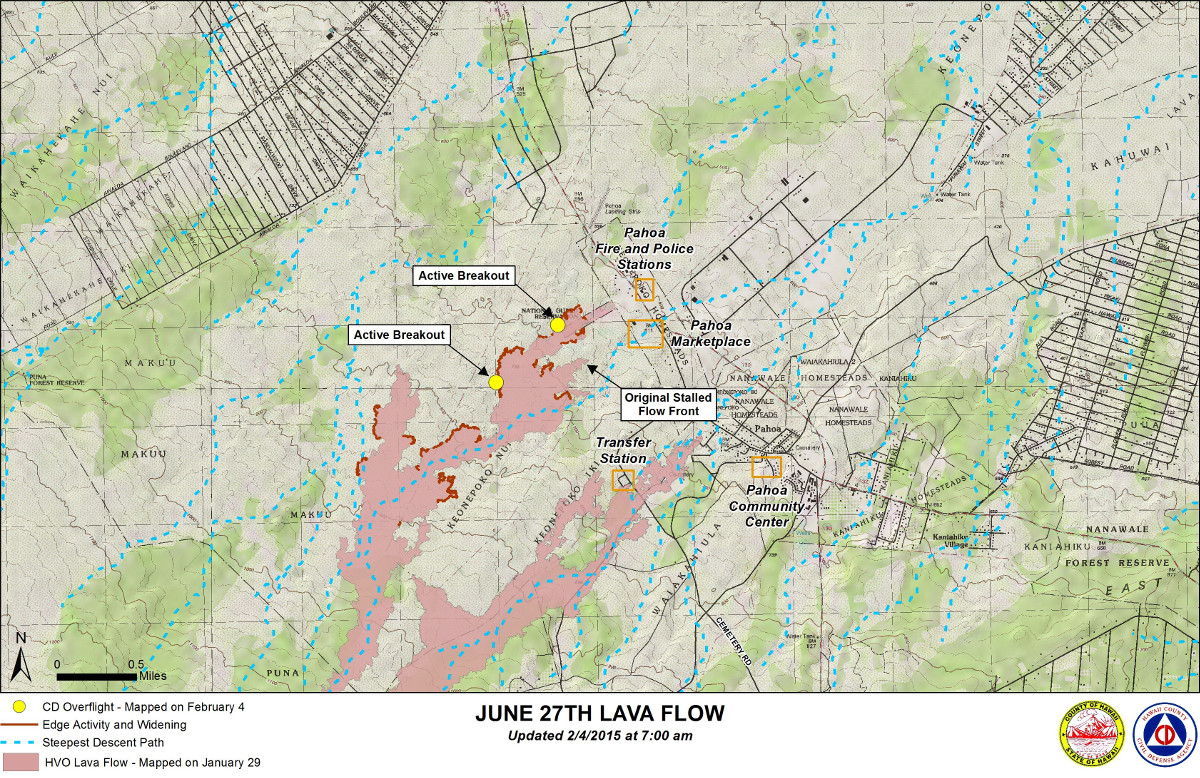 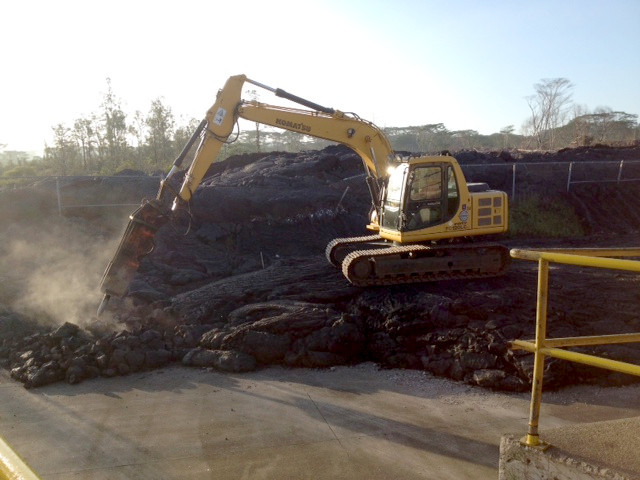 Work to restore the Pahoa Transfer Station to full service has begun. Photo by Karin Stanton.

This morning’s assessment continues to show no advancement of any of the down slope flow areas and all visible activity was limited to breakouts within or on the surface of the lava pad and breakouts along both margins further upslope. The leading edge or front of the furthest down slope flow area remains approximately 0.36 miles from the area of Highway 130 to the west or mauka of the Pahoa Police and Fire Stations and again, showing no signs of advancement. The Hawaii County Civil Defense Agency and Hawaiian Volcano Observatory are maintaining close observations of the flow. Residents and businesses down slope will be informed of any changes in flow activity and advancement.

Smoke and vog conditions were moderate to heavy with a light north wind blowing the smoke in a southerly direction. Smoke and vog conditions may increase in some areas and individuals who may be sensitive or have respiratory problems are advised to take necessary precautions and to remain indoors. No brush fire activity was noted this morning and fire conditions will be monitored closely.

The community is reminded that the Public Lava Viewing area at the Pahoa Transfer Station has been closed effective this past Sunday February 1st. This is to allow for the restoration of the transfer station and to restore normal operations by March 1st. We apologize for any inconvenience this may cause and thank everyone for your patience and understanding.

Kīlauea Volcano continues to erupt at its summit and from its East Rift Zone. The leading tip of the June 27th lava flow remains roughly 500 m (~550 yd) from Highway 130 in the area west of the Pāhoa Fire and Police Stations. The flow has not advanced any closer to the highway in over a week, although breakouts are active upslope. The DI event that began on Monday afternoon was mostly over by Tuesday evening, with subtle summit inflation recorded since that time.

June 27th Lava Flow Observations: On Wednesday morning, observers on the Civil Defense overflight noted that none of the flow lobes that are near Highway 130 have advanced in the past 24 hours. The lava flow continues to be active, however, with numerous breakouts upslope of the flow tip, including a few that can be seen via overnight webcam views in the lower portion of the flow field.

Puʻu ʻŌʻō Observations: The tiltmeter on the north flank of Puʻu ʻŌʻō cone recorded deflation until late Tuesday evening, when the deformation switched to inflation. This pattern is similar to, but lags behind, that recorded at the summit and suggests that the DI event may have been manifested at Puʻu ʻŌʻō as well. All other indicators of volcanic activity at Puʻu ʻŌʻō remained steady. Webcams show a few spots of fluctuating glow emanating from small pits within the crater, and seismic tremor was low. The rate of sulfur dioxide emission from all East Rift Zone vents was about 200 tonnes per day, measured on January 7.

Summit Observations: Deflation associated with a DI event that began on Monday afternoon switched to inflation just after noon on Tuesday. By about 8 PM HST Tuesday, DI inflation was mostly over, and only subtle inflation has occurred since that time. The level of lava within the summit eruptive vent tracked summit tilt throughout the DI event. On Tuesday morning, the lava level was measured to be 48 m (~158 ft) below the vent rim but has risen several meters since that assessment. Superimposed on that overall trend are few-meter (yard) fluctuations in lava level that are associated with changes in spattering and correlative with variations in seismic energy release. Emission rates of sulfur dioxide ranged from around 4,400 to 5,100 tonnes/day during the week ending on January 27.USGS Hawaiian Volcano Observatory on Feb. 4 at 8:13 a.m. HST