HILO, Hawaii – A new master lease for the Mauna Kea Science Reserve was discussed at a public open house in Hilo on Thursday night. The gathering at the Imiloa Astronomy Center was part of the Environmental Impact Statement Prepration Notice process. The University of Hawai‘i at Hilo – charged by the Department of Land […]

HILO, Hawaii – A new master lease for the Mauna Kea Science Reserve was discussed at a public open house in Hilo on Thursday night. The gathering at the Imiloa Astronomy Center was part of the Environmental Impact Statement Prepration Notice process.

The University of Hawai‘i at Hilo – charged by the Department of Land and Natural Resources to manage the 11,288-acre Mauna Kea Science Reserve – wants to replace its existing lease with new a lease before it expires on December 31, 2033. The master lease would include the lease for the 19-acre Halepohaku mid-level facility as well as the easement for the Mauna Kea Access Road between the two areas.

“UH is seeking a new Master Lease for two principal reasons,” wrote the university’s Office of Mauna Kea Management on its website. “The first is to incorporate into the Master Lease the new Comprehensive Management Plan (CMP) objectives. The second is to provide an adequate planning horizon for ongoing and future scientific activity, something that is increasingly difficult as the remaining term of the existing Master Lease becomes shorter.”

According to the “Purpose and Need” section of the 160 page EISPN document:

The Halepōhaku mid-level support facilities at roughly 9,200 feet on the southern slope of Maunakea include the Onizuka Center for International Astronomy, a visitor information center and comfort station, construction workers’ cabins, and stone cabin facilities constructed by the Civilian Conservation Corps in the 1930s. The current Mauna Kea Access Road was improved in the late 1980’s. The Revised Management Plan for the UH Management Areas approved by BLNR in 1995 added a 400-yard wide corridor on either side of the roadway. The total area of the Mauna Kea Access Road corridor is approximately 723 acres.

[1] This general lease is considered a “master lease” because UH has entered into subleases with various entities for the development, operation, and decommissioning of observatories within the MKSR with the approval of the BLNR.
[2] Maunakea is spelled as one word in this document because it is considered the traditional Hawaiian spelling (Ka Wai Ola, Vol. 25 No. 11). Maunakea is a proper noun, therefore spelled as one word in Hawaiian. This spelling is found in original Hawaiian language newspapers dating back to the late 1800s when the Hawaiian language was the medium of communication. In more recent years Maunakea has been spelled as two words, which literally mean “white mountain.” Spelled as two words it is a common noun that could refer to any white mountain verses the proper name of this particular mountain on Hawai’i Island. The common “Mauna Kea” spelling is only used in this document where Mauna Kea is used in published or public documents, such as the “Mauna Kea Science Reserve.”
[3] The entire UH Management Area is designated as part of the Conservation District, resource subzone.
[4] While ultimate authority over the management of the MKSR is retained by the Board of Land and Natural Resources (BLNR), certain responsibilities are performed by UH as provided in the BLNR-approved Mauna Kea Comprehensive Management Plan (CMP) and its subplans (Cultural Resources Management Plan, Natural Resources Management Plan, Public Access Plan, and Decommissioning Plan. These serve as the BLNR-approved management documents for land use and activities within the MKSR. In this document the “CMP” includes the CMP document and its four subplans. 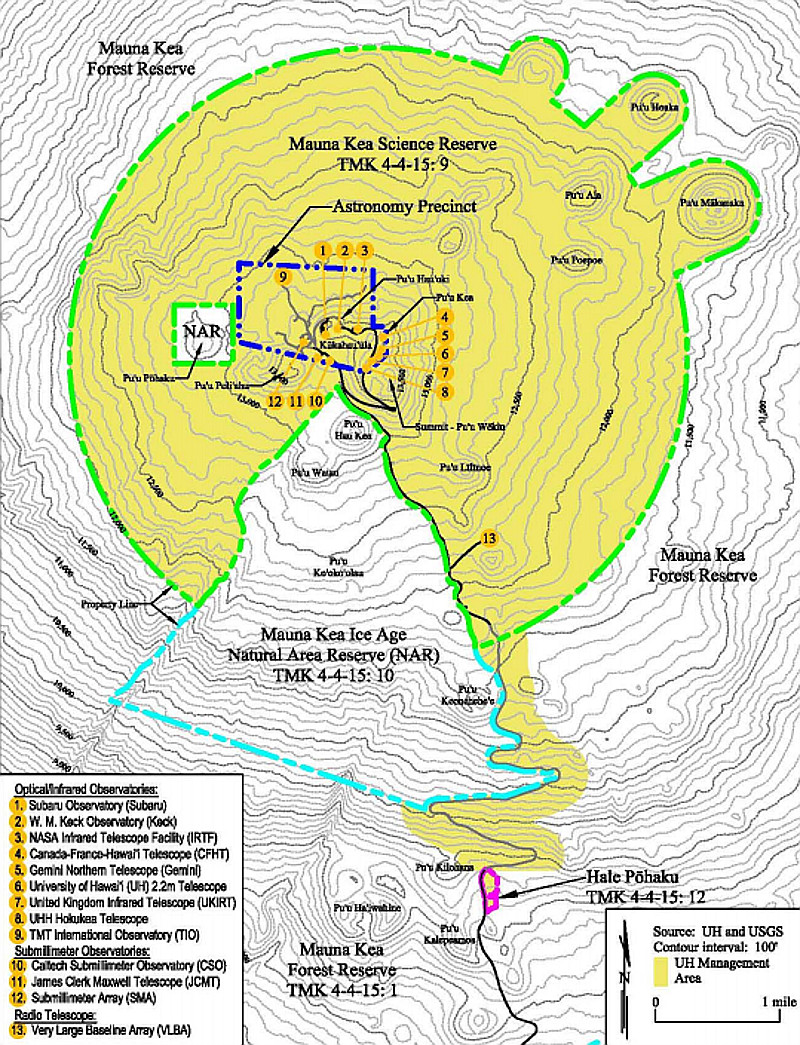 UH is seeking to replace both of its existing leases with new leases well before they expire and to extend the term of the road easement, which is presently due to expire at the same time as the existing master lease. More specifically, by letter dated August 22, 2013, the UH Board of Regents requested the mutual cancellation of the existing leases for MKSR (GL No. S-4191) and the Halepōhaku MidLevel Facilities (GL No. S-5529), and the issuance of new 65-year leases for the premises. At the same time it asked that Grant of Easement No. S-4697 covering the Mauna Kea Access Road be amended so that it would be coterminous with the new general leases.

1.2 OBJECTIVES OF THE PROPOSED ACTION

The primary objective for requesting a new master lease for the UH Management Area is to maintain a physical and administrative environment that will allow the continuance of cutting edge astronomy research on Maunakea. While this would include continuing and upgrading some of the existing operations in the summit region of Maunakea and accommodate potential development of new facilities on previously disturbed sites over the next 65 years, it would also minimize the area disturbed by physical structures within the UH Management Area by requiring the re-use of existing facilities or sites, as well as the decommissioning of facilities and the restoration of impacted sites.
The benefit anticipated by UH in requesting a new master lease is summarized in the August 22, 2013, letter from Mr. John Holzman, Chairman of the UH Board of Regents, to BLNR in which UH identified the following four purposes for its request:

(1) The need to address internal changes made by UH in how it manages lands on Maunakea;
(2) The need to reflect management actions and reporting requirements adopted by the BLNR;
(3) To assist in implementing legislation concerning the Maunakea lands managed by UH; and
(4) To provide the basis for developing sublease agreements with current and any potential future telescope projects.

These purposes are the objectives that UH is seeking to achieve through its request.

Perry White, the president of Planning Solutions, Inc. and hired consultant on the EIS effort, said “optimistically” he expects the draft environmental impact statement to be ready by the end of the third quarter. “It would be much thicker than this,” White said, holding the up the current Environmental Impact Statement Preparation Notice (EISPN). “It would include all of the written comments that we’ve gotten on this. We take all of that feedback, and we develop a final EIS that tries to address everything that everybody has said.” 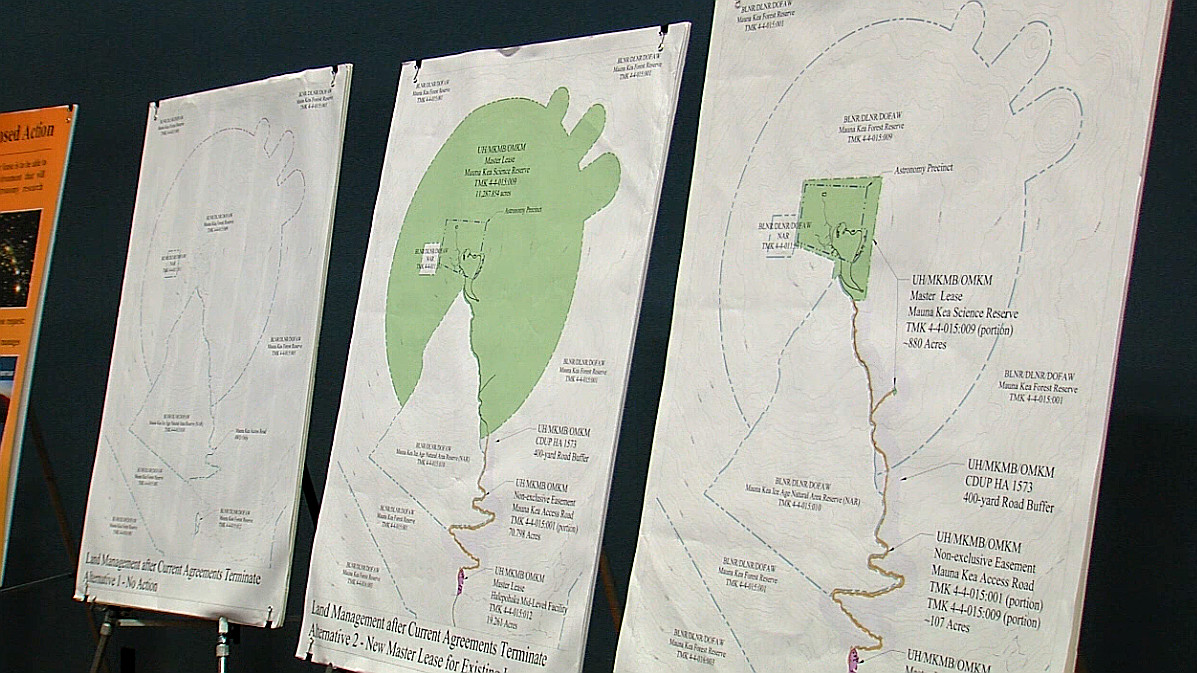 Feb. 5, 2015: The three alternatives on display at the open house in Hilo.

Presently, three alternatives are being considered.

Alternative 1. The No Action Alternative: Under this alternative, the Mauna Kea Science Reserve master lease “would run its course,” according to the document, “and UH and its sublessees would terminate their uses no later than the end of 2033.”

“UH’s lease on Halepōhaku (S-5529) does not terminate until 2041. However, UH would have no further use for the facility if its activities within the MKSR were to cease, as would be the case by the end of 2033 under the No Action Alternative. Therefore, UH would continue to utilize Halepōhaku much as it does today until the astronomical facilities in the MKSR close and then likely take advantage of the early termination provisions in the Halepōhaku lease.”

Alternative 2. New Master Lease for the Existing Area: The current master lease would be terminated by the Board of Land and Natural Resources and a new, 65 year lease for the entire Mauna Kea Science Reserve and Halepōhaku mid-level facility would take its place. The BLNR would also extend the term of Easement S-4697, which allows the non-exclusive use of the Mauna Kea Access Road from Halepōhaku to the boundary of the Mauna Kea Science Reserve.

The EISPN document holds some interesting “preliminary estimates” from the Institute for Astronomy on which observatories would continue to operate beyond the current lease ending in December 31, 2033.

• TMT would remain in service through the end of the new master lease;

• CSO is expected to decommission on or about 2018;

• For the other two submillimeter facilities, James Clerk Maxwell Telescope (JCMT) and SMA, current plans foresee only one continuing after 2033;

• Current plans do not foresee either a major modification of the United Kingdom Infrared Telescope (UKIRT) or redevelopment of the UKIRT site. So, in view of its age, it seems quite possible that UKIRT will decommission within 20 years.

• Current plans assume that the Very Long Baseline Array (VLBA) Antenna will not continue beyond the end of its current sublease (2033).

• If the new master lease is approved, and the funding and necessary permits are secured, CFHT is likely to proceed with the Maunakea Spectroscopic Explorer (MSE) project, placing a 10-meter Keck-type telescope on the existing CFHT pier under a new dome. If this occurs, the facility would suspend operation sometime in the next 5-8 years and reopen about 3 years later, operating through the end of 2079.

• If the new master lease is approved, the UH Hilo Hokukea Telescope would be expected to continue more or less in its current concept for 30-40 years. The UH 2.2-m Telescope is likely to continue for that period as well, but there would be a concerted effort to recycle this site with a more modern telescope of approximately the same overall size. Whether or not the recycling can actually occur will depend upon whether UH is able to raise the necessary funds.

• Infrared Telescope Facility (IRTF) may continue for 10-20 years in its current form, but after that will either decommission or will have a major renovation to install a more modern telescope in a facility with similar characteristics. Whether this happens will depend on what priority National Aeronautics and Space Administration (NASA) gives to having a ground-based O/IR facility to support its space mission, particularly after Hubble is gone.

• Keck I and II, Gemini, and Subaru, which are now in the prime of life, have indicated a strong interest in extending their subleases if a new master lease is granted. In all likelihood they would continue operating without major change for 30-40 years. After that (i.e., in the latter part of the period covered by a new master lease) they could be modified or they might be decommissioned.

Under this and all other Alternatives, astronomical and related facilities on Maunakea would be restricted to existing sublease areas. No new sites would be developed.[9] Construction of the TMT Observatory is anticipated to start in 2015 would continue to completion.

Alternative 3. New Master Lease for a Reduced Lease Area: The university would get a 65 year lease for a vastly reduced area; the 525-acre Astronomy Precinct with approximately 353-acres of adjacent land plus the 2-acre VLBA sublease area, for a total of 880 acres, or 7.8 percent of the current 11,288 acre Mauna Kea Science Reserve. This alternative would also include Halepōhaku. The roughly 10,408 acres of the existing Mauna Kea Science Reserve would be returned to Department of Land and Natural Resources when the current master lease is terminated. 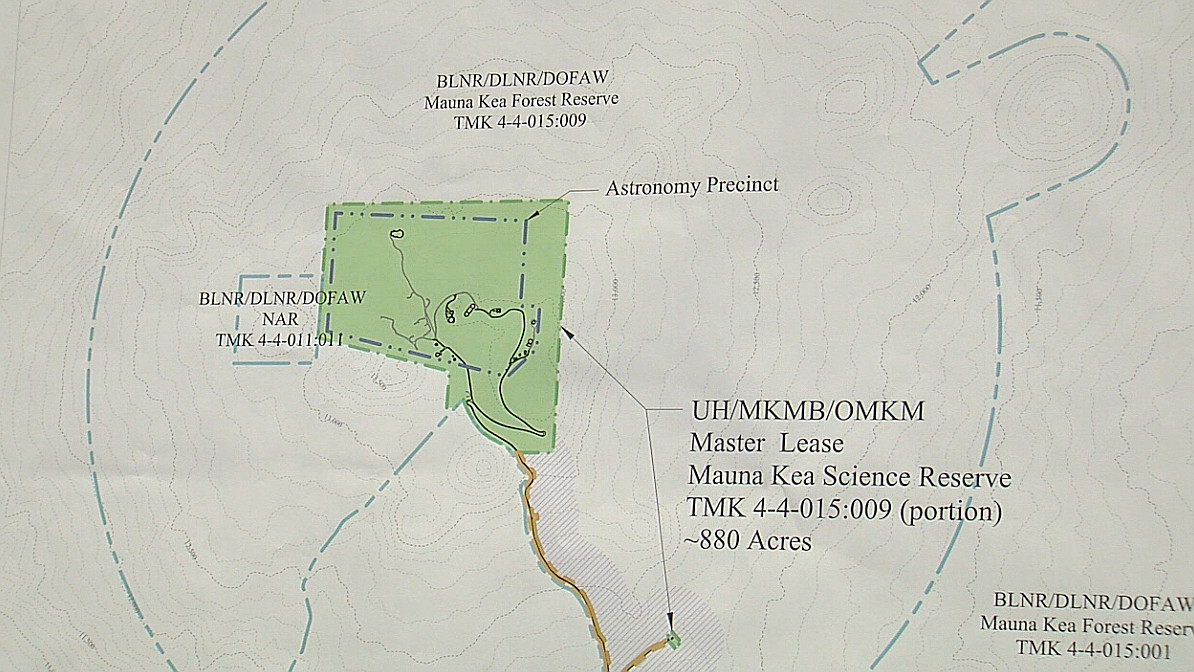 Map of alternative three on display in Hilo. The green represents the reduced area that would be managed by the University of Hawaii, only 7.8% of what it manages now.

The science observatory sub-leases are a controversial topic for many. Many stakeholders opposed to the university lease boycotted the different open house sessions on Oahu, in Waimea and in Hilo. We found a group of them sign waving outside the Imiloa Astronomy Center. We spoke to Mauna Kea Anaina Hou president Kealoha Pisciotta.

A recent Facebook by the Mauna Kea Hui, a group of petitioners who contested the BLNR decision to grant the permit to the Thirty Meter Telescope including Pisciotta, read, “We believe the environmental review process, if done in a pono manner, is an important and critical part of the Aloha ‘Āina movement. What we are opposed to is the UH misusing this process to rubber-stamp projects like the TMT that erodes the public trust that is supposed to define the relationship of the state of Hawai`i with the environment and its peoples.”