WAIMEA, Hawaii – $4 million in general obligation bond funds were recently released for the Waimea District Park project. Governor David Ige released the funds following a previous legislative appropriation. A few weeks ago – before the news of the money release – the big park project was discussed at a Waimea Community Association meeting. […]

Governor David Ige released the funds following a previous legislative appropriation. A few weeks ago – before the news of the money release – the big park project was discussed at a Waimea Community Association meeting. Mel Macy of the Waimea District Park Builders gave an update on the progress of the first, 24-acre phase of the master-planned 50-acre park. Phase one includes work on a covered play court, multi-use community building, pavilion, two football/rugby/soccer fields, one youth baseball/softball field, and a multi-use walkway and trail.

“I’m pleased that the governor released the much-needed and long-overdue funding for plans, designs and construction for this valued recreational facility in West Hawaii,” said Hawaii Island Senator Lorraine Inouye in a media release. “Once the work is completed, it will benefit our community members by filling a void in both indoor and outdoor athletic and recreational activities. Everyone is excited about it and we’re looking forward to thrilling sporting events in the future.” 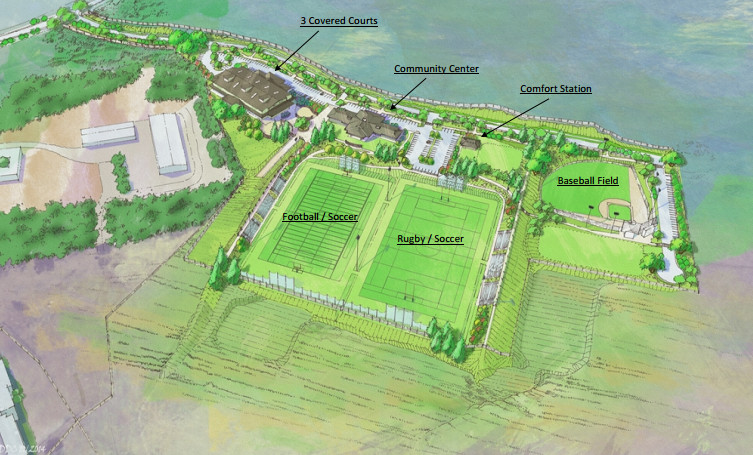 From the Waimea Community Association:

These funds will cover the cost of design and engineering, which is currently underway, and a large portion of the construction costs of Phase 1.

The land has been donated by Parker Ranch, and the process of transferring the land to the County of Hawai’i is nearing completion. The 24.5 acre parcel is located south of Ala Ohia Street and east of the Parker Ranch arena.

The County Department of Parks & Recreation held a public meeting in November 2014 to present the layout and preliminary drawings of the District Park. Phase 1 includes a football/soccer field, rugby/soccer field, baseball field, comfort station, community center and three covered courts, plus the entrance road, parking and park infrastructure, including utilities.

As most in Waimea know, a volunteer group called Waimea District Park Builders, led by Mel Macy, has persistently worked on this project for about eight years, breathing life into a dream that predates the late Councilman Kalani Schutte’s term. To meet the community’s clear need for more recreational fields and facilities, Councilman Schutte negotiated the original commitment by Parker Ranch to donate the land, and former Council members John Ray and Pete Hoffmann both kept the park concept alive and moving forward.

In time, this hui persuaded the County to fund initial planning, including a study to determine the best location. Environmental studies were followed by a design charette, open to the entire community, which drew about 50 volunteers to work with park planners. The plan put forth now by the County reflects many of the recommendations from these efforts.

More recently, Sen. Malama Solomon and Rep. Cindy Evans put forward funding requests to the 2013 and 2014 Legislative sessions. More than 250 community members submitted testimony in favor of the park to the Senate Ways And Means (WAM) Committee and the House Finance Committee, making a huge impression about this community’s need and support for this project. At the time, Gov. Ige was WAM Chair, so this project is not new to him now that he’s on the fifth floor as Governor.

Most recently, Rep. Cindy Evans helped Waimea Park Builders and the County secure release of the funding by the Governor, and our Council representatives, Val Poindexter and Margaret Wille, helped secure Council approval for County funding.

A warm mahalo to everyone who has supported this project – the Governor, our Legislators, the Mayor, our County Council (past and present), County P&R staff, project planners and many community friends. This has been a superb example of collaboration, and it’s really only just beginning!Waimea Community Association