HILO - U.S. Senator Brian Schatz gave an update on the recent news related to the National Park Service in Hawaii during a Town Hall Meeting held Wednesday night in Hilo.

First, Schatz praised President Obama’s announcement that he intends to designate the Honouliuli Internment Camp as a National Historic Monument, under the management of the National Park Service (NPS). The designation will help preserve the history of the site where hundreds of Japanese-Americans were wrongly interned during World War II.

“Honouliuli represents a dark period in our history when thousands of Japanese-Americans in Hawai‘i and across the country were forced into internment camps during World War II,” said Senator Schatz in a media release. “This historic site will memorialize the strength and bravery of the many Japanese-Americans who faced discrimination and serve as a reminder to ourselves and future generations that we cannot repeat the mistakes of the past. Our deep gratitude goes to the Japanese Cultural Center of Hawai‘i, the Japanese American Citizens League and others who worked tirelessly for this achievement. It is meaningful and right that Honouliuli has finally received the historic recognition it deserves.”

During his visit to Hilo, Schatz also talked about another possible designation that the NPS is applying for.

In September 2013, Kaloko-Honokōhau National Historical Park submitted a petition to the state for a Ground Water Management Area Designation for the Keauhou Aquifer System Area in North Kona. Since then, the NPS and the County of Hawaii and developers have been at odds over the issue. 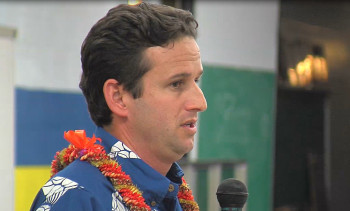 SEN. BRIAN SCHATZ: “I do think the National Park Service has overreached a bit and I think they’re doing it because their instincts are the right ones and they want to protect water resources. But there’s just not enough science to back up what they’re suggesting that we do. And I am about community planning. I am about empowering communities and the Kona Community Development Plan was quite an endeavor and quite a process. There is an affordable housing plan, there is a court house plan, and to the degree extent that the federal government comes into our water commission and says – without sufficient data to the to justify it – ‘you better stop this Kona Community Development Plan because there may be a point at which you will run out of water”. We had to intervene and suggest that they move through a mediation process. It wasn’t that we were a declaring their concerns to be invalid, but we just wanted to have the county, the developers, the environmental community, and what they call CWRM – the Commission on Water Resource Management – get together have a conversation. That is not the way it played out but there’s still time for that. But I wanted you to know that I am aware of this issue and the impact it will have on what I consider to be appropriate development in the Kona area.”U.S. Sen. Brian Schatz

According to a staff submittal:

1. The updates shall proceed in two phases:

ii. The second phase will involve the development of source development strategies and scenarios. The County shall submit additional information on the project description approach and schedule for this second phase by May 30, 2105. This additional information will be considered an addendum to the project and will be submitted to the Commission for approval.