The BLNR will vote on Friday whether or not to authorize an invitation for bids to run concession stands at numerous state parks.

AKAKA FALLS STATE PARK – A food and gift stand may be setting up shop at the popular Akaka Falls State Park.

This Friday (March 12) the Board of Land and Natural Resources will vote on whether or not to authorize an invitation for bids to run concession stands at numerous state parks; Akaka Falls being one of them. The winner be allowed to sell food, beverage and gift items at the location for five years.

The DLNR notes an increase in visitors to the scenic park located mauka of Honomu town. There are restrooms at the park but currently no food or gift concessions.

… On the East side of Hawai’i island, Akaka Falls State Park currently has a parking concession contract which began in March of 2012. The reports track only the paying out-of-state vehicles and indicate a steady number at over 30,000 vehicles per year. The DBEDT states in their latest November, 2014 release that visitor arrivals are on track to have another record-setting 2014 and further projects the increase in arrivals for 2015 to be 1.9%. The Hawaii Tourism Authority comparison report for 2013-2014 Total Visitors states an increase specifically in the Hilo area by 1.3% for 2014. The report further states an increase in cruise ship arrivals by over 10%. The Department of Transportation’s report for the 2015 cruise ship arrivals project over 231,000 visitors via 5 different cruise lines. The typical time in port is about 12 hours, which gives visitors a limited time for sightseeing tours which often include Akaka Falls. Akaka Falls is less than an hour’s drive North from the harbor, making it a very scenic drive to the highly-photographed falls. BLNR submittal for March 13, 2015 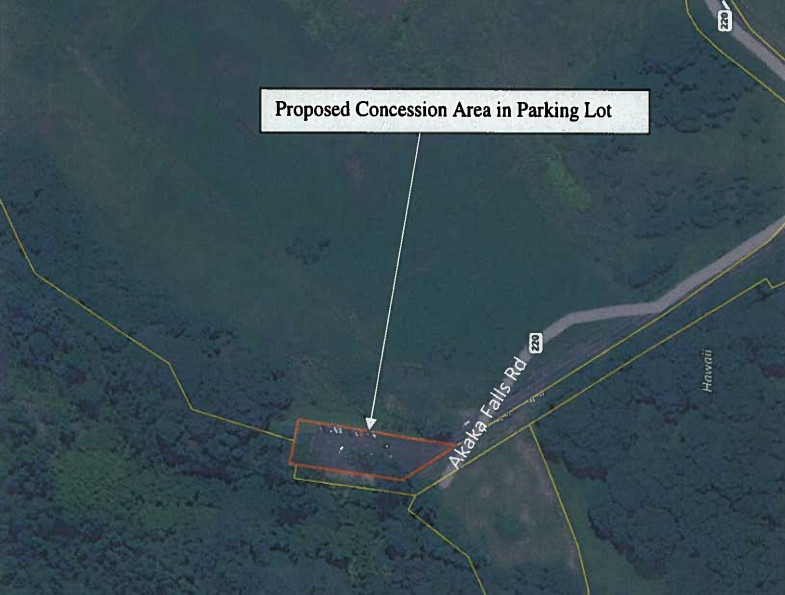 Image from the DLNR submittal shows the location of the concession at Akaka Falls State Park.