A moment parishioners at a landmark Kailua-Kona church have been waiting for: The newly constructed St. Michael the Archangel Church was dedicated on Wednesday, March 25.

KAILUA-KONA, Hawaii – A moment parishioners at a landmark Kailua-Kona church have been waiting for: The newly constructed St. Michael the Archangel Church was dedicated on Wednesday, March 25. Reverend Larry Silva, Bishop of Honolulu, presided over the two hour ceremony, which included a special mass.

The event was the culmination of years of hard work, following the demolition of the original St. Michael’s church – built in the early 1850s – which had become weakened over the years and deemed unsafe following the October 15, 2006 earthquakes. The new church, like the original, will serve as an impressive Kailua Village landmark on Alii Drive.

“Listening to our parishioners and the community, we built our new church to resemble the original St. Michael’s. They share the same exterior profile and we incorporated several elements from our first church into our new one.”Rev. Konelio “Lio” Faletoi, pastor

Fern Gavelek shared this information on behalf of the church:

At nearly 9,500 square feet, the $11 million church is larger and offers seating for 500. Constructed by Heartwood Pacific on a three-acre campus fronting Ali‘i Drive, the new church will offer outdoor parking for 125 vehicles and is ADA accessible. New footings on the property’s south side are in place for St. Michael’s future parish center, which will house administrative offices, conference rooms, a library and certified kitchen. The landmark 1940 Coral Grotto was moved to grace the front of the future center. Throughout the construction process, St. Michael’s on-site cemetery was not disturbed.

A baptismal font sculpted from a large piece of West Hawai‘i lava will greet the faithful entering the church. The font is surrounded by mosaic tiles etched with words that appeared over the altar of the first church: “E Ku‘u Keiki: E Ho Mai No‘u Kou Pu‘uwai A E Ike Oe I Ku‘u Alahele-The Lord Says to Thee: Give Me Thy Heart and Let Thine Eyes Keep My Ways.”

Having the font at the entrance of the church reminds all who enter that it is in the waters of baptism that Christian life begins,”Rev. Konelio “Lio” Faletoi, pastor 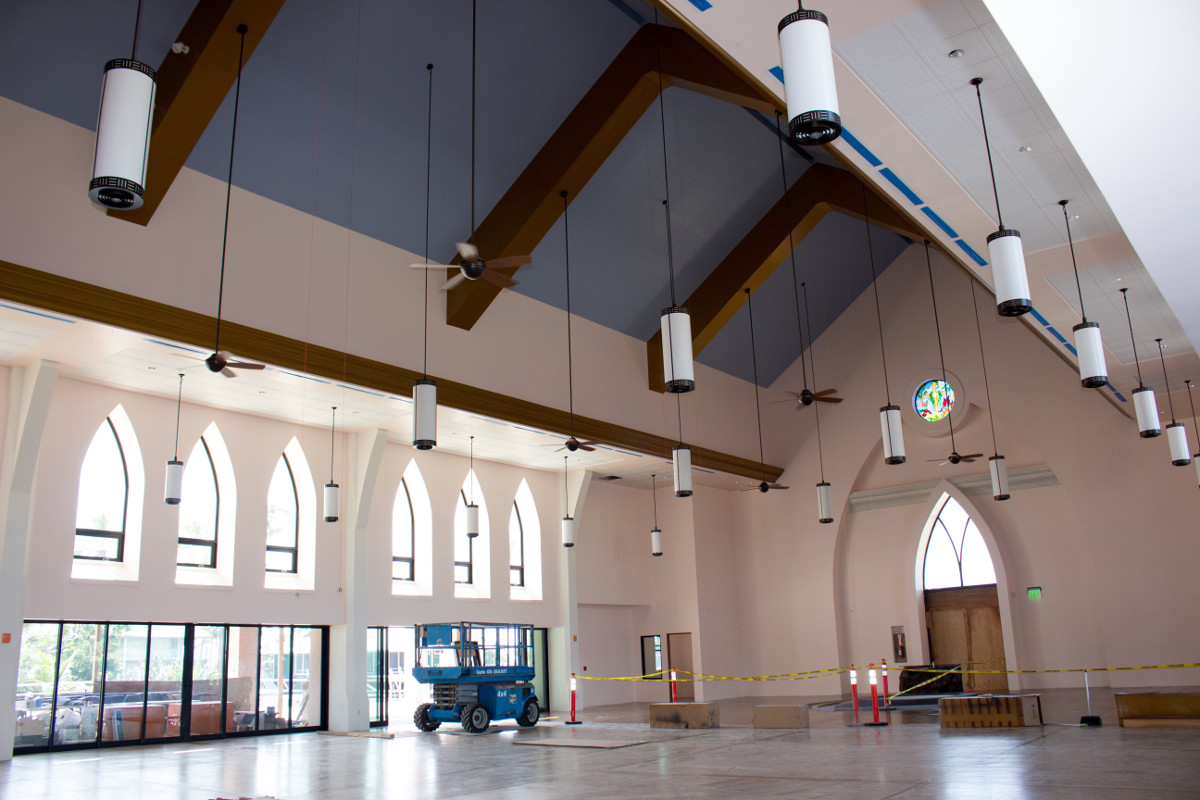 The north and south sides of the rectangular-shaped church have six sliding glass doors that open to two sprawling lanai along the length of the building. Behind the main altar is a small adoration chapel, which houses two of the original church’s tall stained glass windows.

Local artisans crafted the church’s new altar, ambo (pulpit) and presider’s chair and cabinetry in both sacristies were completed by a local woodworker. Similar to the original church, a steeple crowns the eastern end of the new, one-story structure and contains the parish’s 1853 bell, a gift from France.

Designed by Lively Architects of Honolulu, the front of the church is elevated 21 feet to meet building code requirements and the entrance is accessed via two semi-circular stairways. Cradled between the stairways is a restored, fresh water well that was historically used by the Kailua community.

The 35-foot diameter garden uses multi-colored, inscribed pavers in a circular mosaic design to chronicle not only those who played a significant role in North Kona’s Catholic heritage, but also inscriptions by brick sponsors. A total of 2,450 bricks were used and over 1,000 are inscribed using 14 languages from contributors in 36 states.

The well has been preserved to serve as a central feature in the outdoor Waikupua Brick Garden,” says Fr. Lio. “We invited parishioners and the community to become part of the history of St. Michael’s by sponsoring a brick in the garden.”Rev. Konelio “Lio” Faletoi, pastor 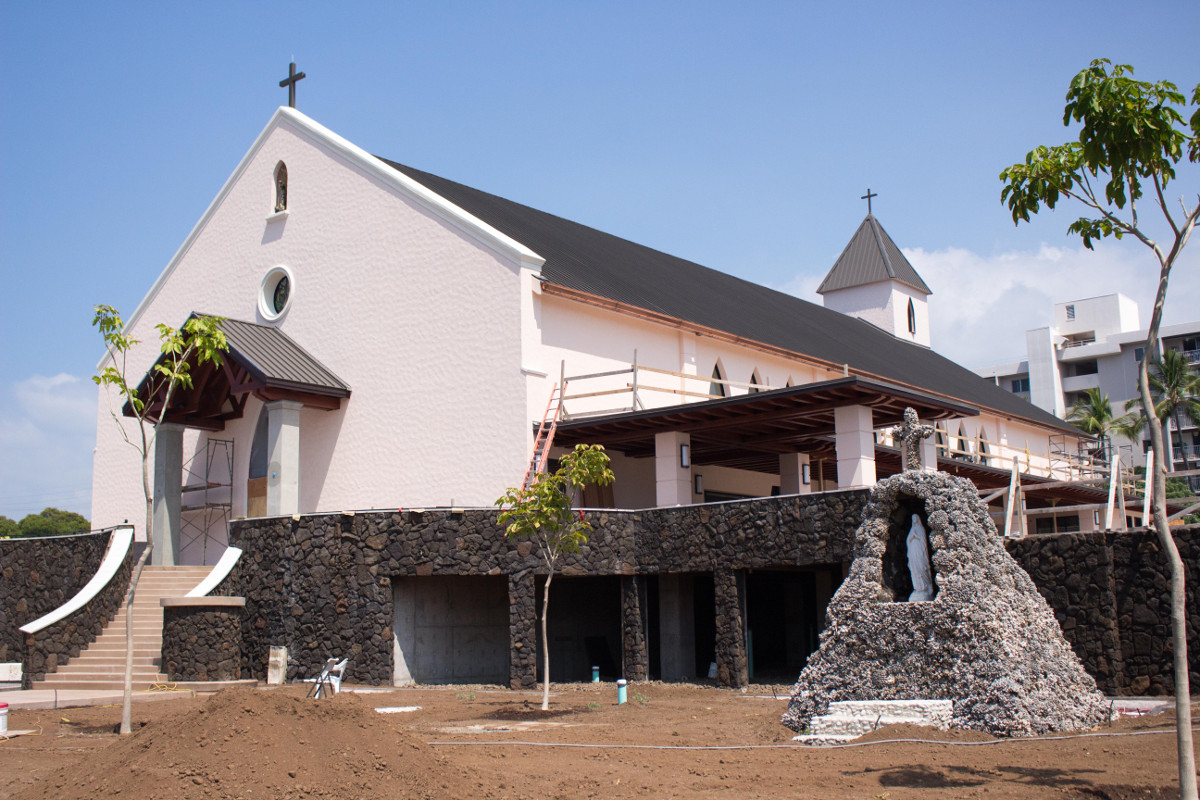 A long-time Kailua Village landmark, the original St. Michael’s was built in the early 1850s of lava rock and coral sand mortar; the floor was simple, hard-packed dirt. Reportedly one of the island’s best buildings of its time, the simple church was dedicated upon completion in 1855. Through the years, it was weakened by ocean flooding and damaged beyond repair during the October 15, 2006 earthquakes. After deemed unsafe, the church was closed and decommissioned in 2009 with services held on the grounds under a tent. The church was soon demolished along with the adjacent wooden administration building, which opened as a convent for the Sisters of the Holy Family in 1955. When the new church construction commenced, tent services were moved offsite to Honokohau Industrial Park.

Demolition of St. Michael’s included locating the remains of Father Joachim Marechal, a member of the Congregation of the Hearts of Jesus and Mary who oversaw the construction of the original church and was buried in the church in 1859. Archeologist Bob Rechtman of Rechtman Consulting guided the exhumation and the priest’s remains have been reinterred in front of the altar and under the sanctuary.

Rev. Marechal came to St. Michael’s in 1848 to serve Catholics in the North and South Kona Districts. He succeeded two French missionary priests, Fathers Ernest Heurtel and Robert Walsh, who offered the Big Island’s first Catholic mass in 1840. With the blessing of Governor John Adams Kuakini, the founding priests built a “native-style” chapel on the site of the current Kona Plaza Shopping Arcade; a stone hitching post marks the location. Kuakini subsequently offered the priests a piece of land to build a church and school—the present property of St. Michael’s Church.

Today, St. Michael’s Parish—which includes the four mission churches of Immaculate Conception in Holualoa, Holy Rosary in Kalaoa, St. Paul’s in Honalo and St. Peter’s by the Sea in Keauhou—serves 2000 families. In addition, the parish welcomes thousands of visitors annually.

“Building the church has been a long, arduous process that involved working with multiple agencies and professionals, getting numerous permits and finalizing a design that satisfied our current needs and building codes while preserving our important history. We thank all who donated their time, talent and treasure and we continue to believe our most important asset is the faith of our members who continue to carry Christ to the community and its less fortunate persons.”Rev. Konelio “Lio” Faletoi, pastor

St. Michael’s has an ongoing Capital Campaign to pay off construction debt and build the future parish center. Phone (808) 326-7771. 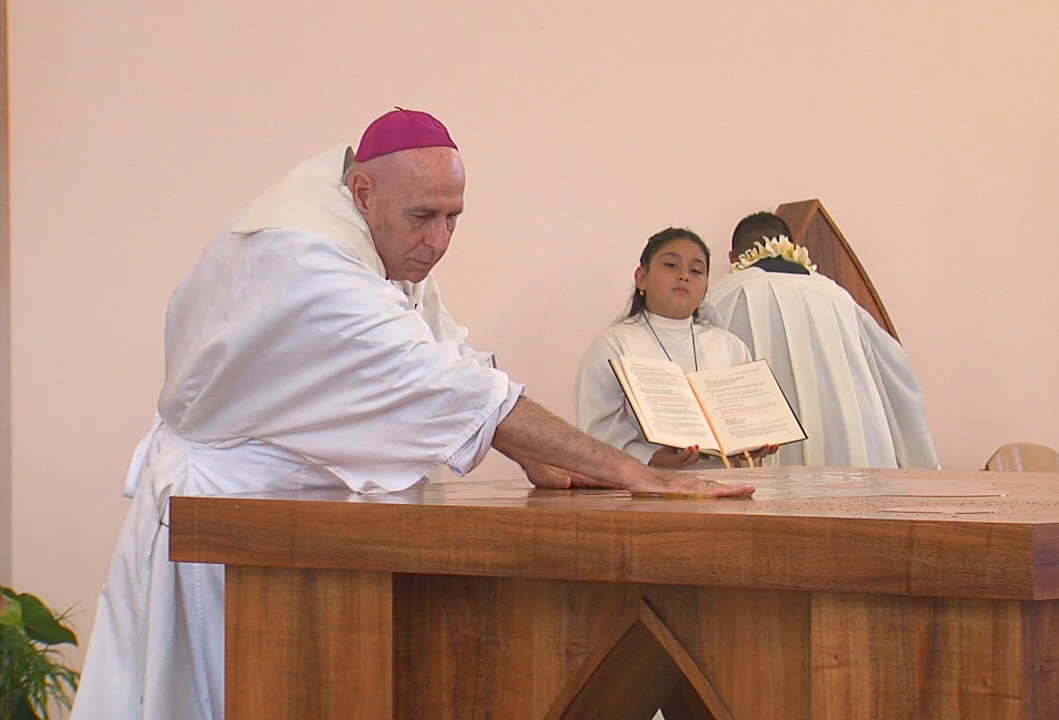 Most Reverend Larry (Clarence) Silva, Bishop of Honolulu, anoints the alter of the new St. Michael’s church in Kailua-Kona.