PUNA - The June 27th lava flow is still alive, although all activity is within 4 miles of Puʻu ʻŌʻō.

The video above incorporates a media conference call held on March 25, the day the USGS Hawaiian Volcano Observatory’s volcano alert level was downgraded from a Warning to a Watch. One of the questions posed during the discussion was what the downgrade meant for the efforts to recoup expenses related to the lava response via federal funding.

PUNA – Hawaii County officials have extended the state of emergency due to the June 27th lava flow and called for another community meeting on April 2.

The June 27th lava flow is still alive, although all activity is within 4 miles of Puʻu ʻŌʻō. That’s a good distance from Pahoa (about 8 miles away). Downslope the lava flow remains inactive, and because of that the USGS Hawaiian Volcano Observatory reduced the alert level from Warning to Watch March 25th, “owing to the decrease in immediate threat during the past several weeks.”

Nonetheless, on March 30th, Mayor Billy Kenoi signed the fourth supplementary proclamation extending the state of emergency declaration for another 60 days. Kenoi’s proclamation reasoned that – according to USGS – the June 27th lava flow shows no signs of halting and the “threat could rapidly return to a WARNING level”.

The county has also called for another community meeting on the lava flow – the first since January. It will be held on Thursday, April 2 at 6:30 p.m. at the Pahoa High School Cafeteria.

USGS and civil defense continue to watch the lava flow. On the morning of March 31, USGS reported:

Webcams showed overnight that three areas of breakouts continued to be active in the upslope portion of the June 27th flow field located to the northeast of Puʻu ʻŌʻō: the northern flank of Puʻu ʻŌʻō (Feb. 21 breakout), an area near Puʻu Kahauale’a, and an area 5-6 km (3-4 mi) northeast of Puʻu ʻŌʻō. Last Tuesday’s HVO overflight showed that the farthest northeast breakout area was continuing to burn forest. USGS Hawaiian Volcano Observatory on March 31 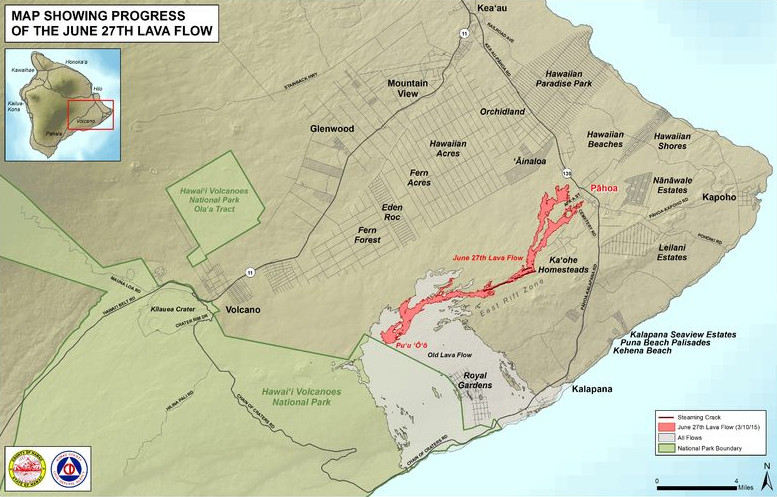 ONE LAST MAP on posted to the Civil Defense website.