Opponents of the Thirty Meter Telescope turn out in large numbers

HILO – A special meeting of the University of Hawaii Board of Regents in Hilo was packed just before noon on Thursday. On the agenda for discussion: “The Management of Mauna Kea and the Mauna Kea Science Reserve”, a topic which drew hundreds both opposed to and in support of the $1.4 billion Thirty Meter Telescope planned for the Northern Plateau of summit of the mountain.

UPDATE (1 p.m.) – So far, the meeting has been dominated by testimony from those in opposition to the TMT development on Mauna Kea. Speaker after speaker, many of whom have been actively involved in the movement to defend the sacred mountain, told the regents and other university officials that the massive observatory is being built in the wrong place. University officials were also told that the Kingdom of Hawaii still exists, and is under the prolonged occupation of the United States. They say the development of the telescope is a war crime under international law. UH students pointed to the recent incident involving American Flags on the campus. The students say the university – which has agreed to their terms for displaying the American flags beside the Hawaiian flag, on separate flag poles – has by its action recognized that the laws of occupation are applicable and should be followed.

UPDATE (3:10 p.m.) – Hours of emotional testimony ended at 3 p.m. when the university concluded the meeting. Officials promised to hold another in the near future in order to hear from everyone who wants to testify. However, at the time of this update, people were still speaking to the crowd inside the university lecture hall.


Those who oppose TMT for cultural, environmental or political reasons are struggling to block the project from continuing. On April 2, 31 people were arrested for obstructing construction crews on the road to the summit area. Since then, the opposition has grown and the awareness has spread globally thanks in large part to social media. TMT began a two week moratorium after the arrests, and in that time the corporation and its supporters developed a counter argument to the opposition that relies on increased media engagement and a new website.

The UH Board of Regents “formulates policy and exercises control over the university through its executive officer, the university president,” according to the UH System website. The board has exclusive jurisdiction over the internal structure, management and operation of the university, and has already voted to approve the project and the terms of the sublease. The master lease was granted to the university by the state Board of Land and Natural Resources. UH and the land board are currently working on an extension of the master lease.

The board is composed of 15 volunteer regents who are appointed by the governor and confirmed by the legislature. 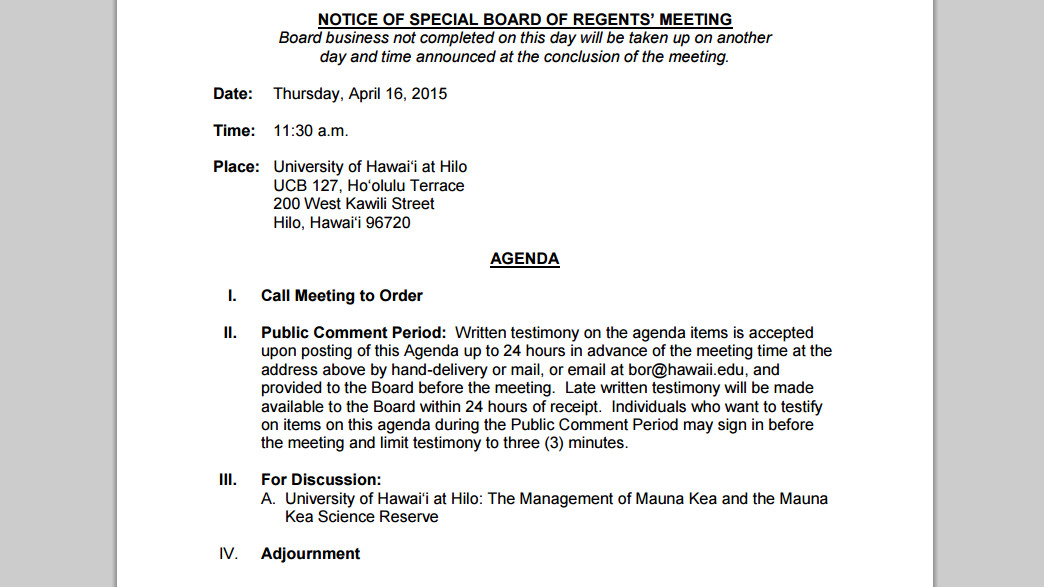 The Thirty Meter Telescope Project is being developed as a collaboration among the California Institute of Technology, University of California, the Association of Canadian Universities for Research in Astronomy (ACURA), and the national institutes of Japan, China, and India. Major funding has been provided by the Gordon & Betty Moore Foundation.