HAWAII ISLAND – Tropical Depression Four-E has developed in the Pacific and has moved into the Central Pacific Basin. The storm is about 1,025 miles east southeast of Hilo, Hawaii and moving west northwest at 17 miles per hour, according to the National Hurricane Center. Right now, winds are sustained at 35 miles per hour. […] 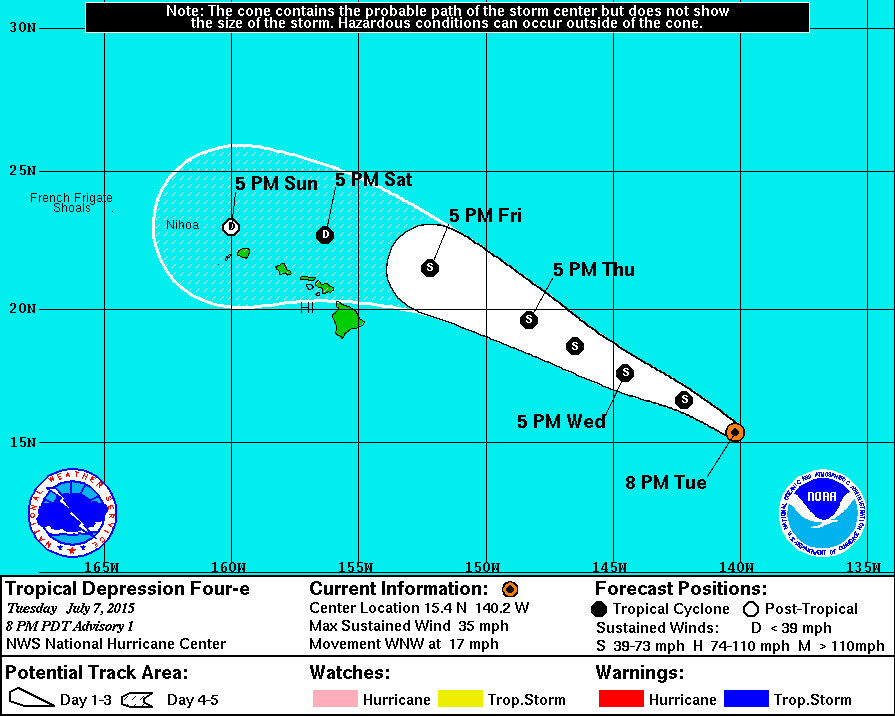 HAWAII ISLAND – Tropical Depression Four-E has developed in the Pacific and has moved into the Central Pacific Basin.

The storm is about 1,025 miles east southeast of Hilo, Hawaii and moving west northwest at 17 miles per hour, according to the National Hurricane Center. Right now, winds are sustained at 35 miles per hour. There are no coastal watches or warnings in effect.


Meteorologists have been keeping an eye on the system for a few days now. Some strengthening is forecast during the next 48 hours, and the depression is expected to become a tropical storm later tonight or early Wednesday.

Visible satellite images late this afternoon indicate that curved bands of convection have developed around the center of the well-defined low pressure system located more than 1000 n mi east-southeast of the Hawaiian Islands. Therefore the system now qualifies as a tropical cyclone, and advisories are being initiated at this time. SAB/TAFB Dvorak satellite intensity estimates range from T1.5/25 kt to T2.5/35 kt, and the system has a pattern T-number of T2.0, so the initial intensity is set at 30 kt.

The initial motion estimate is 300/15 kt. During the next 72 hours, the cyclone is forecast to move in a general west-northwestward direction along the southern periphery of a strong deep-layer ridge located to its north. By 96 hours, the system is expected to weaken and become more vertically shallow, and be steered westward by the low-level easterly trade wind flow. The models are in general agreement through 72 hours, but then diverge significantly after that, with most of the NHC guidance moving the cyclone or its remnants west-northwestward to northwestward at 96 and 120 hours. The exception is the ECMWF model, which turns the system west-southwestward by 96 hours and beyond. The official forecast track is similar to the consensus model TVCE through 72 hours, and then follows the ECMWF trend after that since this model maintains a larger and more realistic vortex on days 4 and 5.

The SHIPS guidance indicates that the deep-layer vertical wind shear is expected to remain below 10 kt while the system is over 26C or greater sea-surface temperatures for the next 24 hours or so, which should allow for gradual strengthening into a tropical storm. By 48 hours, the shear is forecast to increase to more than 20 kt from the southwest, which should cap any intensification and induce a steady weakening trend after that. However, the GFS-based SHIPS model is forecasting stronger vertical shear than the ECMWF model and, as a result, shows complete dissipation of the cyclone by 96 hours. Given the reliability of the ECMWF, the official intensity forecast has incorporated a blend of these two models’ shear computations, and maintains the system as a tropical cyclone through 96 hours, and a remnant low at 120 hours. This scenario seems more likely given the rather large size of the circulation, which will make the vortex more shear resistant and also take longer to spin down and dissipate.