HAWAII ISLAND – Tropical Depression Four-E showed little change overnight, according to the Central Pacific Hurricane Center in Honolulu. The depression was 865 miles east of Hilo as of 5 a.m. HST, and was moving northwest at 16 miles per hour. With maximum sustained winds at 35 miles per hour, Four-E would have to sustain […] 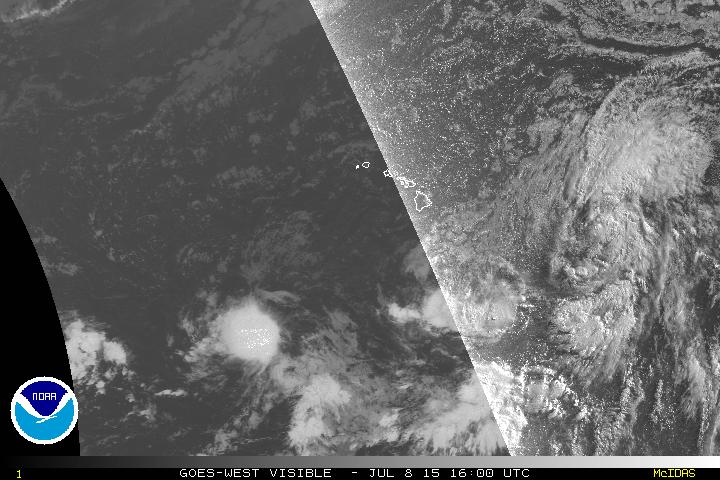 HAWAII ISLAND – Tropical Depression Four-E showed little change overnight, according to the Central Pacific Hurricane Center in Honolulu. The depression was 865 miles east of Hilo as of 5 a.m. HST, and was moving northwest at 16 miles per hour. With maximum sustained winds at 35 miles per hour, Four-E would have to sustain 39 mph winds to become a Tropical Storm.

No watches or warnings are in effect at this time.

Hawaii County Civil Defense issued this audio message at 7 am this morning:


The depression still has a poorly organized center, according to the National Weather Service. From the 5 a.m. discussion:

“Latest satellite images show that the depression has failed to organize over the past several hours… Most likely due to persistent southwesterly shear. The poorly organized center is difficult to locate due to a paucity of recent microwave passes… And due to what appear to be short-lived mid-level centers rapidly ejecting north-northwestward from where the llcc is assumed to be. Latest subjective Dvorak intensity estimates range from 1.5 to 2.5… But a data-t is nearly unattainable due to a lack of deep convection near the center. As organization has not increased since the previous advisory… The initial intensity for this advisory has been maintained at 30 kt.” – National Weather Service discussion at 5 am on July 8, 2015

The lack of a defined center is lending to some uncertainty about the movement of the depression:

“The initial motion estimate is 305/14 kt… But due to the poorly defined center… A greater than normal amount of uncertainty surrounds this motion vector. The cyclone is tracking northwestward within the steering flow provided by a deep-layer ridge centered to the northeast… And this general motion is expected to prevail for the next couple of days. Latest shear analysis from Uw-cimss indicates nearly 20 kt of south-southwesterly shear over the system… While ships indicates somewhat lower values initially. Shear values as high as 50 kt located a couple hundred of miles northwest of the cyclone are associated with the gradient between a nearly stationary closed low aloft centered northeast of the main Hawaiian Islands… And the ridge to the northeast of the cyclone. Over the next couple of days… These features are forecast to move west… Maintaining at least moderate south to southwesterly shear over the system. This persistent shear is expected to lead to an increasingly shallow system by day 3… But the steering flow should keep it moving generally northwest before the remnant system turns a little more westward on day 4. The updated forecast track is essentially an update of the previous… And closely follows gfex guidance.” – National Weather Service discussion at 5 am on July 8, 2015

The NWS also says time is running out for the depression to grow stronger, although the forecast still calls for the formation of a Tropical Storm.

“Ships guidance indicates that only a small window exists for the depression to intensify before the system succumbs to the debilitating impacts of increased southwesterly shear… With gfs-based ships dissipating the system in 72 hours. While the forecast continues to indicate some intensification in the short term… Confidence in this solution is waning due to the cyclone/s inability to consolidate overnight. The updated intensity forecast follows the trends presented by the reliable guidance… And has been nudged downward… With a post-tropical remnant low on day 4 dissipating by day 5.” – National Weather Service discussion at 5 am on July 8, 2015