LATEST There are no coastal watches or warnings in effect. Tropical Storm Guillermo is 1,905 miles east southeast of Hilo, Hawaii. It is moving west northwest at 14 miles per hour. The National Weather Service says the direction should hold and an increase in forward speed is expected during the next 48 hours. Guillermo continues […] 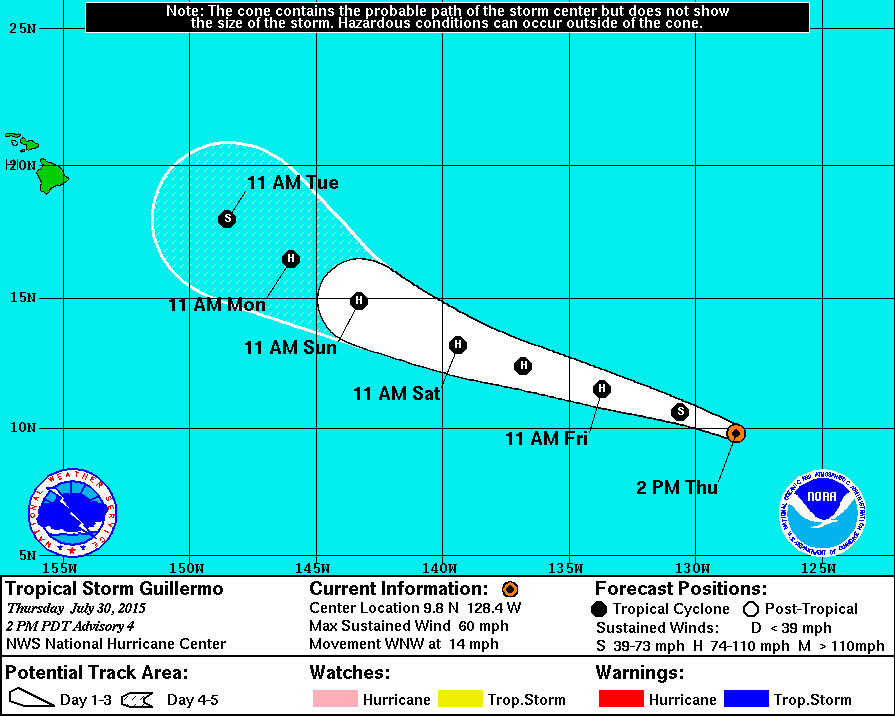 Guillermo is quickly becoming better organized, and both microwave and visible imagery suggest that the cyclone is developing a ring of inner core convection. Dvorak classifications at 1800 UTC were T3.0/45 kt from both TAFB and SAB, but given the quickly improving convective structure, the advisory intensity is set at 50 kt. This is close to the latest UW-CIMSS ADT estimate of T3.4/53 kt.

The upper-level outflow of Guillermo continues to expand, and the storm is over very warm waters of around 29 degrees Celsius. Global model guidance indicates that Guillermo should remain in a light-shear environment for at least another 3 days, while also remaining over warm water and in a moisture-laden atmosphere. Therefore, continued strengthening is likely for the next 48 hours, and Guillermo could become a hurricane within the next 12-24 hours. Gradual weakening is forecast from day 3 through 5 due to stronger upper-level westerly winds which could affect the cyclone. The statistical-dynamical guidance continues to show only modest strengthening — barely taking Guillermo to hurricane status — but this scenario seems low given the seemingly favorable environment. The NHC official intensity forecast remains closer to the higher dynamical guidance and is largely unchanged from the previous forecast.

The subtropical ridge is steering Guillermo west-northwestward, or 295/12 kt. The ridge is forecast to strengthen slightly, causing Guillermo to accelerate during the next 36 hours. After that time, a mid- to upper-level low well west of California is expected to produce a break in the ridge, which should cause the cyclone to slow down and turn northwestward by day 5. The latest track guidance ended up lying to the west of the previous official forecast track, and the updated NHC track has therefore been shifted a bit to the left, especially after 48 hours. – National Weather Service