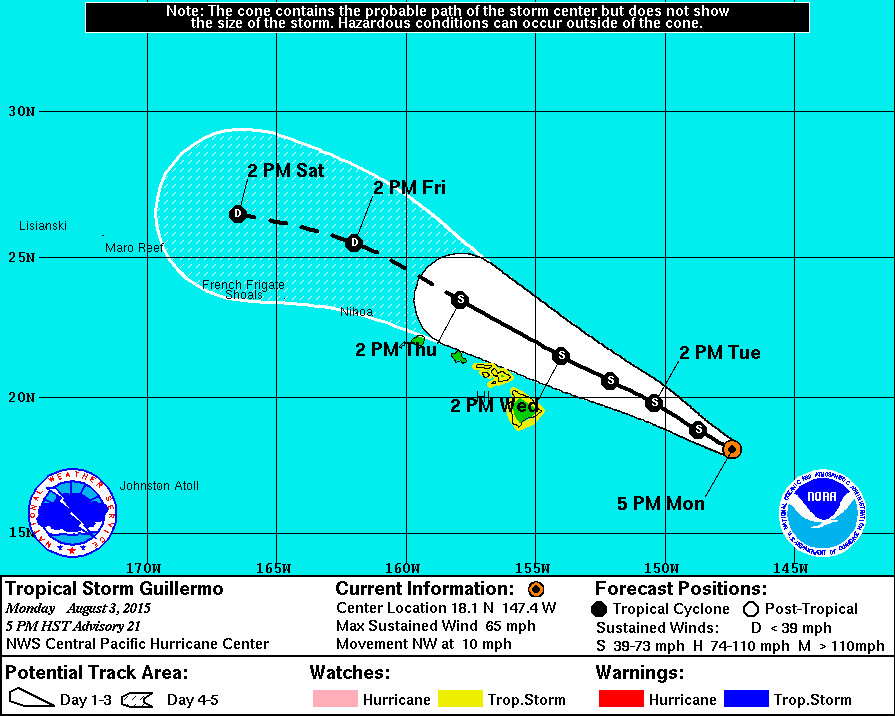 Little has changed through the day with Guillermo looking very ragged in the satellite images. Deep convection has been pulsing northeast of the center… Which has been very difficult to locate without the benefit of aircraft recon. A very timely AMSU pass at 0003 UTC was the main basis for the initial position. Subjective Dvorak intensity estimates from PHFO… SAB and JTWC were all at 55 kt and is the initial intensity for this package.

Guillermo is moving through a break in the ridge aloft with an initial motion of 310/09 kt. The latest objective aids have shifted farther north than the previous forecast with the HWRF making the largest leap to become a northern outlier through 36 hours. The current forecast is an update of the previous package and is close to the GFS and ECMWF track through 36 hours… Then south of the dynamical aids for the later forecast periods. This forecast track accounts for the possibility that the increasing vertical shear along the forecast track could weaken Guillermo a little faster than the dyanmical aids forecast and will follow a path weighted more toward the lower level steering current.

Along the forecast track… Guillermo will continue to move toward increasingly hostile vertical shear. Ships shear forecasts indicate 25 kt by 12 hours and more than 30 kt by 48 hours. This is consistent with upper level winds projected by the global models. The forecast calls for continued weakening of Guillermo as it approaches the main Hawaiian Islands and is in line with the previous forecast.

While the forecast track keeps the center of Guillermo northeast of the main Hawaiian Islands… A significant deviation to the left of the track would have the potential to bring tropical storm conditions to the Big Island or Maui County. When accounting for the size of the system… There remains enough uncertainty to warrant issuance of a Tropical Storm Watch for Hawaii and Maui Counties. Other counties may be added later as needed.