HAWAII: In a media release issued by the Hawaii Emergency Management Agency, officials say the current track remains "highly uncertain, however, all islands are within the cone of uncertainty so should prepare for impact early next week."

HAWAII – As a pair of hurricanes – Ignacio and Jimena – head towards the Hawaiian Islands, state officials are urging the public to prepare over the weekend.

Hurricane Ignacio is the closer of the two at 785 miles east southeast of Hilo. Ignacio is moving toward the northwest near 8 mph, and this motion is expected to continue for the next couple of days. In a media release issued by the Hawaii Emergency Management Agency, officials say the current track remains “highly uncertain, however, all islands are within the cone of uncertainty so should prepare for impact early next week.” 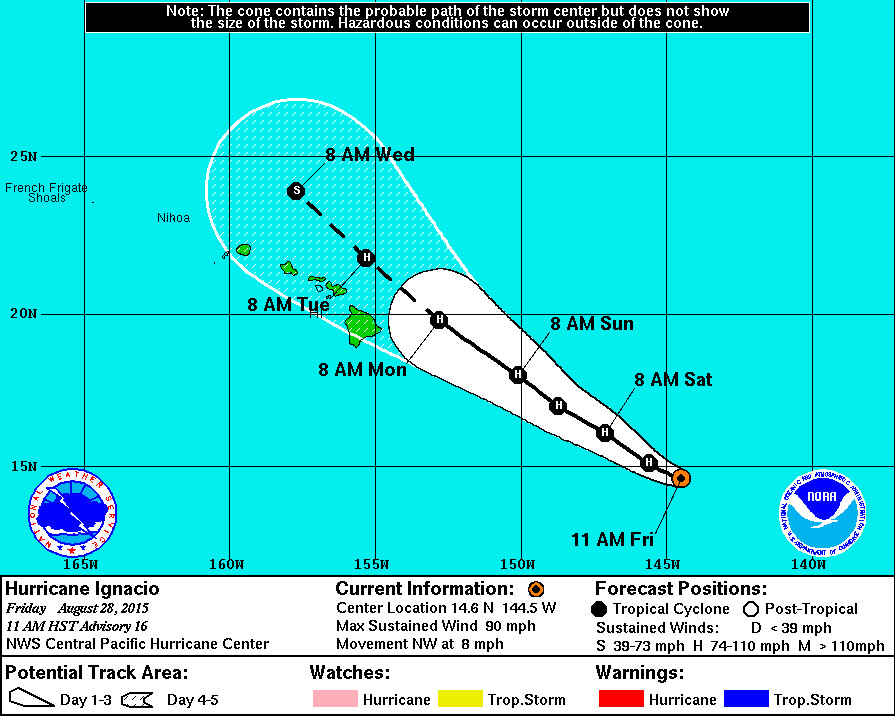 “We understand the public is fatigued from experiencing four major approaching storms so far this season, but we urge people to take the weekend to prepare their homes and families for impacts that could be felt statewide,” said Doug Mayne, Administrator of Emergency Management. “Severe weather associated with Ignacio is expected, and with Jimena not far behind, we need to ready ourselves and our loved ones as much as possible with the time we have. We will continue to work with our county, state and federal partners and leadership to monitor the storms and provide the public with timely updates as we receive them.” 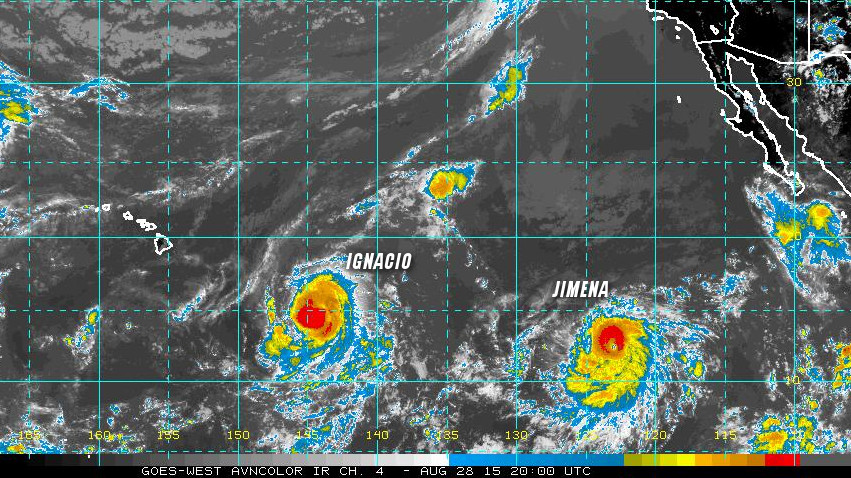 East and southeast facing shores of Hawaii Island and Maui can expect advisory-level surf on Saturday and warning-level increases Sunday through Monday. Tropical Storm force winds could begin to impact Hawaii Island as early as Sunday evening, the state says.

The National Weather Service says Igancio has not strengthened today, remaining a Category One Hurricane with 90 mph winds. Some additional strengthening is possible today and Saturday.

“If Ignacio tracks across all islands,” the state says, “impacts include extreme hurricane force winds, storm surge and widespread flash flooding. If the system tracks to the north or south of the state, there is potential for extremely gusty winds, heavy rain and thunderstorms.”

The Hurricane Hunters are set to fly into Ignacio this evening, which should provide a more accurate forecast of strength and track.

Following far behind Hurricane Ignacio is Hurricane Jimena, which just strengthened into a Cateogory Two hurricane. It appears to be following a similar track but is too far from the Central Pacific Basin to forecast its possible effect on the Hawaiian Islands.

Ignacio’s cdo devolved to a ragged but very sharply curved convective band over the last few hours… And a couple of ssmi/s overpasses around 1620 utc showed a partial eye feature wrapping northwest through southeast around the low level center. Current intensity estimates remain at 4.5-5.0 and thus we will maintain an 80 kt intensity for this advisory.

The hurricane continues to track toward the northwest or 305 degrees at about 7 kt toward a weakness in the mid-level ridge… And this general motion is expected to continue for the next several days. The track guidance remains fairly tightly clustered… But there are some noteworthy outliers like the Navgem and Canadian models which are still well left of the consensus. The official forecast track lies very close to the previous forecast… And is also on the left side of the guidance envelope. One reason for this is that most of the model guidance appears to be underestimating the effect of increased wind shear which is expected to start impacting Ignacio after 2-3 days… Which could potentially impart a more westward motion after 3 days. With this in mind… It is very important for people not to rely too much on the exact forecast track especially at the longer time ranges.

Ignacio is currently in a weak shear environment near an upper level ridge axis along with warm sea surface temperatures near 28.5c. Sea surface temperatures remain over 28c along the forecast track for the next 3 days… Then begin dropping slightly. Wind shear is expected to remain weak… Which could allow for some additional strengthening over the next 36-48 hours before increasing southwest shear begins to start affecting the system. Weakening is expected in the days 3-5 time frame… And our intensity forecast shows a faster weakening trend occurring than most of the model guidance… And more in line with the lgem… In the face of this moderate to strong shear.