HAWAII: The center of Ignacio will pass approximately 200 miles northeast of the Big Island on Tuesday night, if the current forecast tracks holds. Ignacio is also expected to weaken to a Tropical Storm by Tuesday. 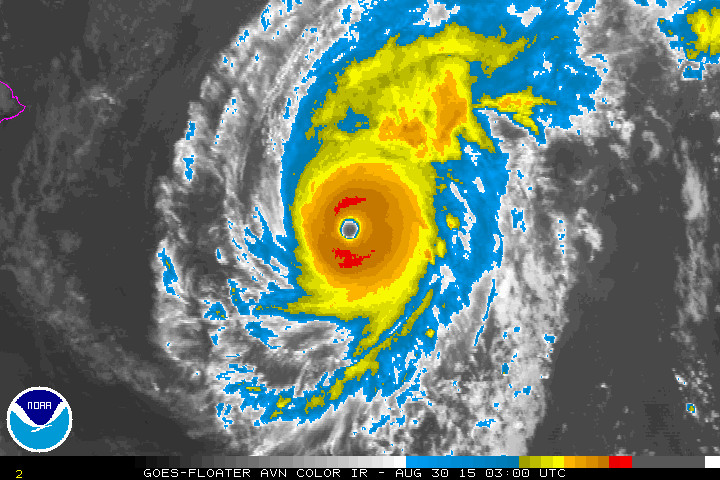 HAWAII: Reconnaissance aircraft finds Ignacio is weaker, according to the National Weather Service at 11 a.m., but its still a major hurricane for now with maximum sustained winds blowing at 115 mph. A Tropical Storm Watch remains in place for the counties of Hawaii and Maui.

The center of Ignacio will pass approximately 200 miles northeast of the Big Island on Tuesday night, if the current forecast track holds. Ignacio is also expected to weaken to a Tropical Storm by Tuesday. 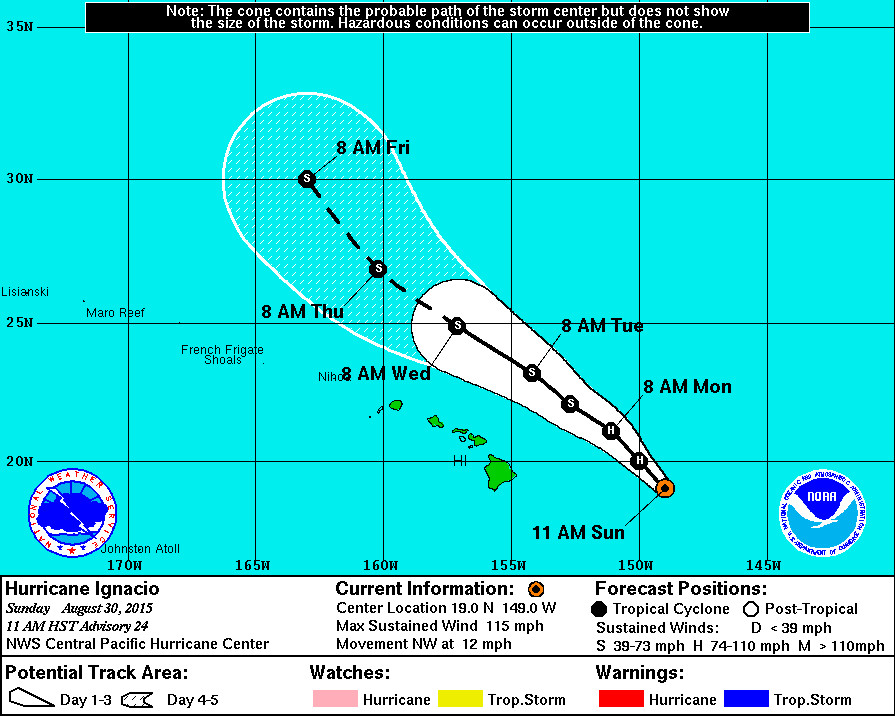 The Coast Guard Captain of the Port reports that based on Ignacio’s current trajectory to the northwest it does not appear that the closure of commercial ports in the Hawaiian Islands will be necessary.

As a precaution, the COTP has moved the ports of Hilo and Kawaihae on the Big Island and the ports of Kaunakakai and Kahului in Maui County to Condition X-Ray (III): The READINESS condition in which winds above 34 knots (39 mph) are expected within 48 hours.

The reconnaissance aircraft found maximum flight level winds of 107 knots… A maximum sfmr wind of 94 kt… And a 961 mb surface pressure on the last pass through the eye. Thus… Have lowered the intensity of Ignacio to 100 kt for this advisory. The uw-cimss shear analysis shows Ignacio is now experiencing 15-20 kt of southwesterly shear… Which is confirmed on satellite imagery by the restricted outflow in that quadrant. Recent microwave imagery and the recon reports show that the ring of eyewall convection has opened up… And the eye has now become cloud-filled on visible imagery.

The initial motion is 325/10. Ignacio is about to get entangled with a weak but digging upper level trough over the main Hawaiian Islands which will continue to steer the tropical cyclone toward the northwest. The forecast track has been adjusted to be slightly more northward in the short term in the face of increasing southwesterlies… With a bend back toward the northwest after 24 hours as Ignacio becomes increasingly sheared. This is a little to the right of the guidance consensus through 24 hours… Then shifts to the left of the consensus guidance by 48 hours and beyond. Late in the forecast period… A stronger digging mid-latitude trough far to the northwest of Hawaii is expected to steer Ignacio more northward again.

The dynamic models show southwesterly shear will increase rapidly over Ignacio over the next 24-48 hours… And thus rapid weakening is expected. It is interesting that it has taken the ships statistical guidance this long to indicate the magnitude of shear as depicted by the dynamical models for a couple of days now. In any case… The forecast has been adjusted weaker and is now lower than most of the guidance suggests. The shear may weaken a bit temporarily during the days 4-5 time frame… But by then Ignacio will be moving over cooler water.