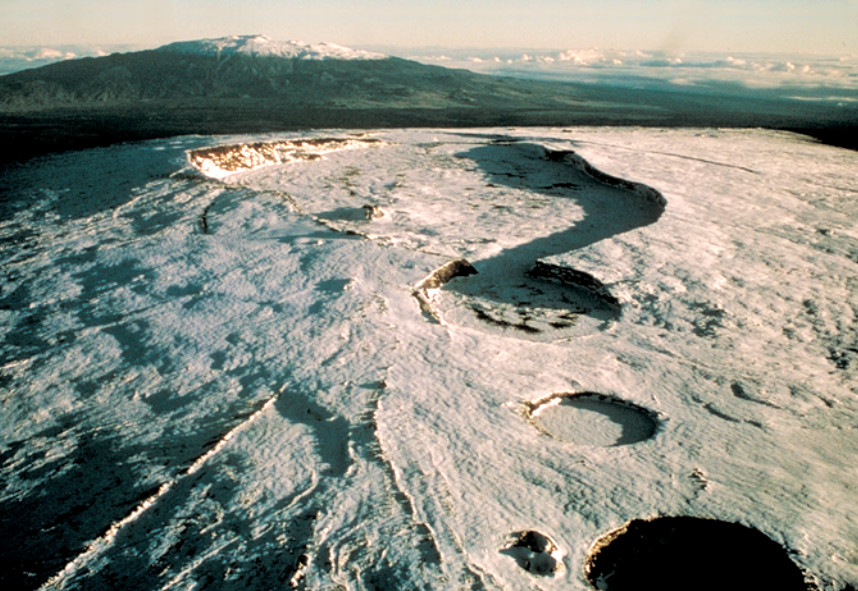 (from USGS Fact Sheet) Aerial photograph looking north-northeast across the summit area of Mauna Loa (elevation 4,169 meters or 13,679 feet). At the summit is Moku’aweoweo Caldera, a volcanic depression 3 miles (5 kilometers) long. The pit craters in the foreground are part of the upper southwest rift zone. Mauna Kea Volcano rises on the skyline.

The scientists of the USGS Hawaiian Volcano Observatory changed the Volcano Alert Level and Aviation Color Code for Mauna Loa Volcano from NORMAL/GREEN to ADVISORY/YELLOW on September 17, following months of observed upward trends in earthquake rates and inflation. 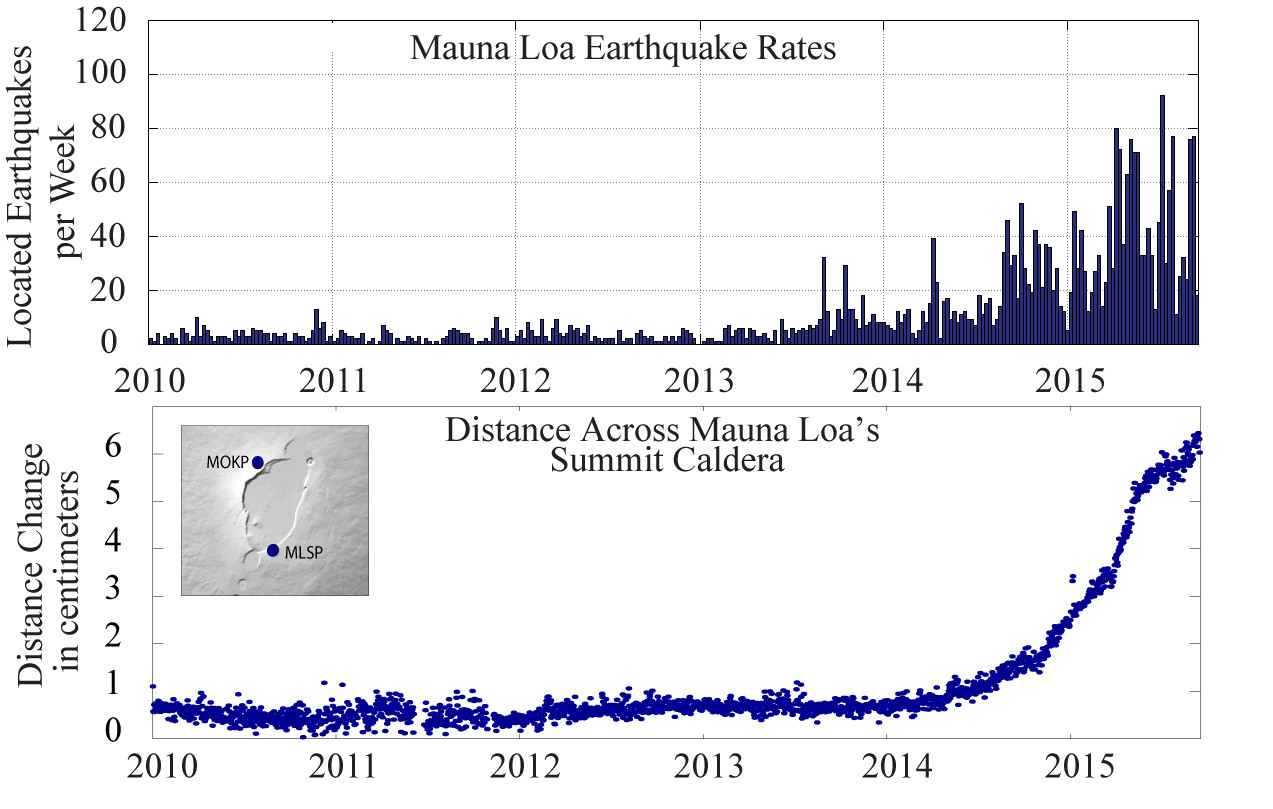 This increase in alert level does not mean that an eruption is imminent or that progression to an eruption is certain. Mauna Loa last erupted on March 25, 1984; the activity lasted just over three weeks. Since that time, all has been quiet on the mountain, although rapid inflation of the volcano in 2004-2005 triggered the last elevation in the alert level to an ADVISORY/YELLOW. The alert level was downgraded in early 2010 back to NORMAL/GREEN. There was no eruption.

Mauna Loa encompasses more than half the Island of Hawaii and rises to 4,169 meters (13,679 feet) above the Pacific Ocean. 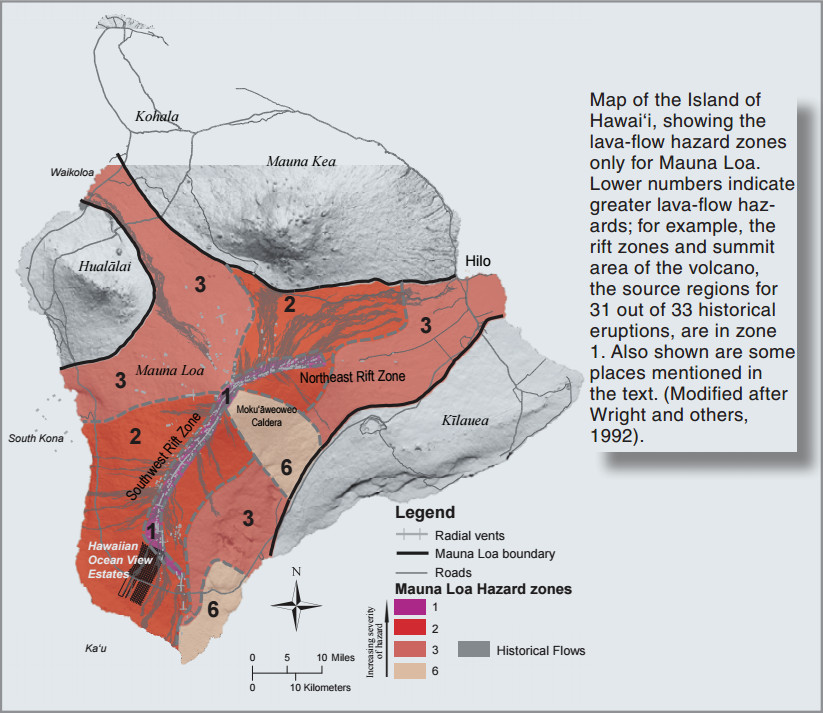 The U.S. Geological Survey`s Hawaiian Volcano Observatory scientists have written a timely Volcano Watch article entitled “The Art (and Science) of Assigning Volcano Alerts Levels”, which we share below. 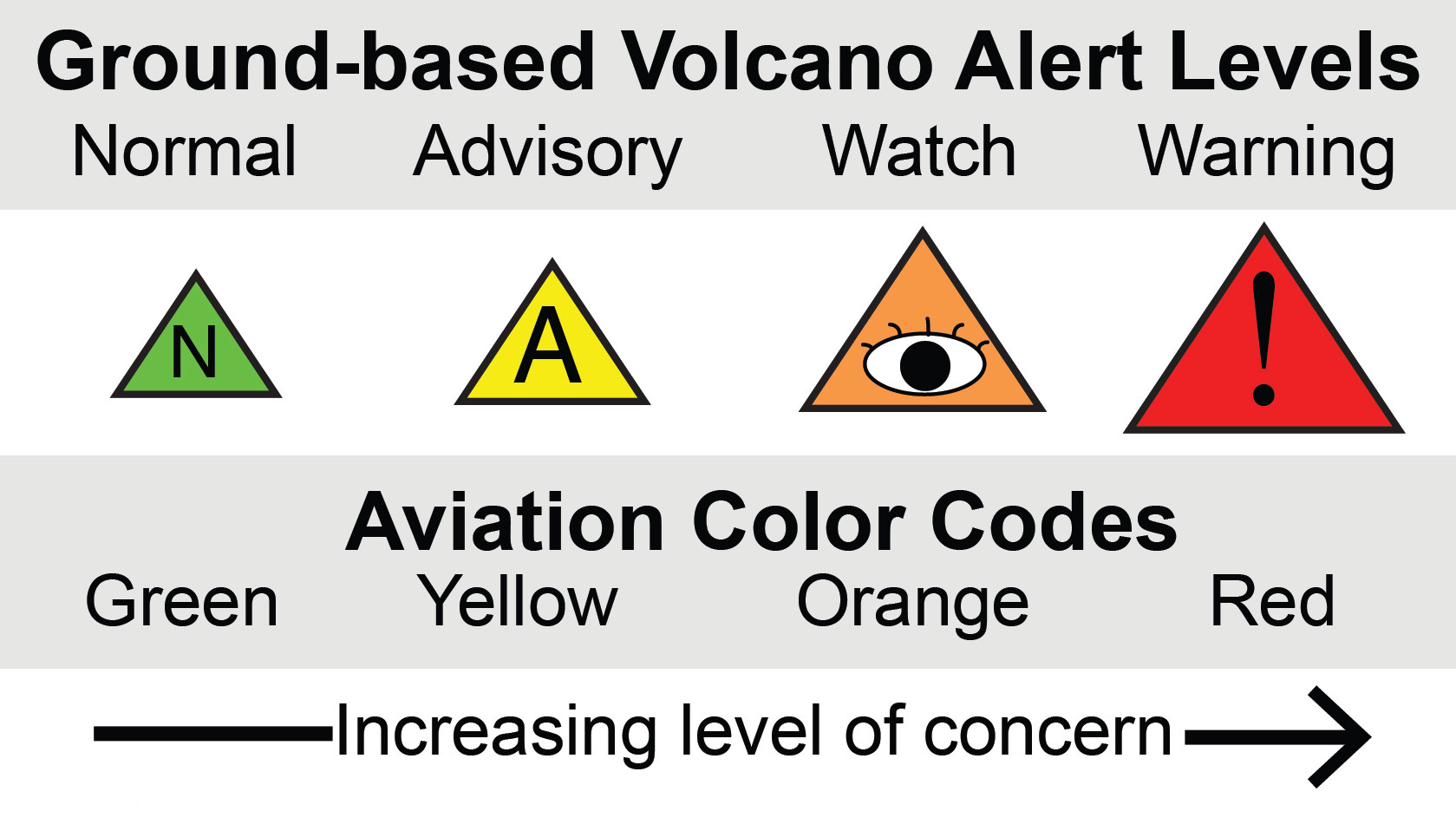 The USGS Hawaiian Volcano Observatory (HVO) changed the Volcano Alert Level and Aviation Color Code for Mauna Loa Volcano from NORMAL/GREEN to ADVISORY/YELLOW on September 17. This change reflects HVO’s determination that the volcano is showing persistent signs of low-level unrest. It does not mean, however, that an eruption is imminent or certain.

This decision followed many months of a higher than normal rate of earthquakes and ground deformation as magma accumulated in shallow storage reservoirs, pressurizing and stressing its summit and upper rift zones.

What do these Volcano Alert Levels and Aviation Color Codes mean, and how does HVO decide to change them?

The USGS Aviation Color Code system has roots in Alaska. During the 1989-90 eruption of Redoubt Volcano near Anchorage, the Alaska Volcano Observatory determined that airlines needed a shorthand way of understanding threats posed by a restless or erupting volcano. So, USGS developed a simple, four-color scheme similar to a traffic light to convey the message.

In this way, pilots, dispatchers, and air traffic controllers would not need to sift through long text descriptions to evaluate their risk of flying near or downwind of a volcano: GREEN meant all clear; YELLOW meant the volcano is restless, be aware; ORANGE meant pay very close attention, the situation may be escalating or there may be volcanic ash up to about 25,000 feet above sea level; and RED meant danger, you may need to reroute or cancel the flight!

For a number of years, this color code system was only used in Alaska where each year 1 or 2 eruptions send potentially dangerous ash into trans-Pacific jet flight routes.

Then, in 2006, the U.S. Geological Survey’s five volcano observatories adopted a single system of communicating volcanic threats across the nation. As part of this unified approach, USGS added the terms NORMAL, ADVISORY, WATCH, and WARNING to reflect the danger primarily to people and infrastructure on the ground. These Volcano Alert Level terms were chosen in part to mirror those used by NOAA’s National Weather Service for severe storms and flood.

Assigning alert levels and color codes requires that we can measure the activity level of a volcano—from quiet to full-bore eruption. This, in turn, requires that the volcano be monitored around the clock with seismometers, cameras, satellites, and other instruments that can detect signs of magma moving underground or lava and ash actively erupting. With such infrastructure in place, we can, over time, define a background state of typical activity (NORMAL/GREEN) so that sustained departures from background are caught in the act (YELLOW/ADVISORY).

Knowing exactly when to change the color code and alert level is not always easy. It’s difficult to establish specific thresholds for changing color codes or alert levels. Decisions are made by looking at all monitoring data, patterns of previous unrest and eruption, and considering what is known about the processes occurring at each volcano. Typically, there is extended discussion among observatory scientists before a change is made.

Alert level changes are announced in a USGS Volcanic Activity Notice which explains the reasoning and what to expect next with as much precision as possible. As has been the case for Kīlauea, sometimes the alert level designation stays the same for many years. For other volcanoes with different styles of eruption, changes may occur quite often.

While the decisions to change Volcano Alert Levels and Aviation Color Codes may seem a bit mysterious, any ambiguity or inconsistency reflects the fact that we still have much to learn about how volcanoes work. Not every eruption, even at our well-studied Hawaiian volcanoes, follows exactly the same pattern. Each episode of unrest and eruption—or unrest without eruption—adds to a growing body of knowledge that helps scientists to issue more accurate warnings.

In summary, the USGS Volcanic Activity Alert-Notification System communicates the degree and, in some cases, the timeframe of a particular volcanic threat. With this information, public safety and emergency managers, individuals and families, and businesses can take appropriate and timely steps to keep our communities safe.