WASHINGTON D.C. (BIVN) - Hawaii's U.S. Senator is calling for additional personnel and resources to fight the fungus that is killing thousands of acres of native forest on the Big Island at an alarming rate.

WASHINGTON D.C. – U.S. Senator Brian Schatz (D-Hawaii) today called for immediate action from the Department of the Interior to stop the spread of Rapid ‘Ōhi‘a Death on Hawaii Island.

Schatz authored a letter to Interior Department Secretary Sally Jewell, calling for additional personnel and resources to protect ‘ohia on the Big Island and prevent the spread of the tree disease.

Last week, the Hawaii County Council passed a resolution urging the Governor to declare a state of emergency on Hawaii Island due to the spread of the disease.

If this was a forest fire, there would be no question about an all-hands-on-deck, no-holds-barred response. Rapid Ohia Death is bigger than a forest fire in size and scope, and we need to treat it as such. Researchers have given us clear guidance on how we can stay ahead of this tree disease and prevent its spread to the rest of the state. That is why I have requested Secretary Jewell to direct the Fish and Wildlife Service and the National Park Service to provide the additional personnel and resources that will be necessary to protect our ohia.”U.S. Sen. Brian Schatz

Here is the Schatz letter to Sec. Jewell. (UPDATE: There has been a change to the letter below. The original version shared with media was a draft. Here is the final version. A reference to a request to declare a state of emergency has been removed.)

I am writing to follow up on my conversation with you last summer about Rapid ‘Ohi‘a Death (ROD), and to ask you to direct the National Park Service (NPS) and the Fish and Wildlife Service (FWS) to provide additional personnel and resources to protect our “ohi‘a. Simply put, this is the most urgent environmental crisis to face our rainforests in generations, and we implore you to use an all-hands-on-deck approach. If this were a forest fire, we would have no hesitation mobilizing whatever assets and resources were necessary. The scale and scope of the danger from ROD warrants the same coordinated response, and merits your urgent attention.

Since our conversation, scientists have concluded we have a narrow window of opportunity to get ahead of this crisis and prevent the spread of ROD from Hawai‘i Island to the rest of the State. Success or failure hinges on immediate action from land managers across Hawai‘i Island.

A copy of an earlier Hawai‘i Delegation letter to apprise you of the emerging threat of ROD is enclosed for your reference. Our understanding of the disease has grown significantly, and what we have learned is sobering. ROD is incredibly virulent, with estimated mortality rates of over 20%. To put this in perspective, mortality rates for even the most destructive outbreaks of Sudden Oak Death are only 3-5%.

Scientists are still working to understand exactly how ROD spreads, but experts are confident that frass from boring beetles comprises an important vector. Ambrosia beetles bore into infected wood, and push out grains finer than talcum powder that are easily carried by the wind. These particles are infested with spores from the ROD pathogen, the fungus Ceratocystis fimbriata. Significantly, the spores carried this way – aleurioconidia – are thick-walled and durable, which means that frass from infected wood is likely to remain a threat for years after a tree dies.

Looking at the incidence of the disease revealed by the State of Hawai‘i’s most recent survey (April 2016) of Hawai‘i Island’s forests, and overlaying it with typical prevailing winds provides further support for the experts’ assessment that ROD is spreading long distances on the winds because ROD can be found almost all the way around the island. All told, the survey found a total of 32,733 acres with ‘ohi‘a tree crowns partially or entirely brown, which indicates the advanced stages of ROD infection, and 4,624 acres with ‘ohi‘a trees that had completely lost their foliage but with fine branches still attached, which indicates recent ROD mortality. A map that shows the results of the survey is enclosed.

For now, the Hamakua Coast appears almost completely free of ROD-and this is why we need your help. Prevailing winds are currently working to keep infected frass from spreading ROD to the Hamakua Coast, but should it become infected, the winds will begin working against us, and it is only a matter of time before a strong weather event carries the fine, talc-like frass across the channel to Maui.

Working together federal, State, and local agencies on the ground have confined ROD to Hawai‘i Island through the emergency quarantine imposed by the Hawai‘i State Department of Agriculture, but the best scientific evidence suggests that the quarantine will not be enough, should ROD spread to the Hamakua Coast. Preventing this will take sustained vigilance to identify infected trees-along with continued investment in research to understand ROD and its epidemiology, and to develop better management responses.

Through the US. Geological Survey, your Department has taken an active role to support research, and the NPS and FWS have both participated in the ROD Working Group established to respond and protect Hawai‘i’s native forests and the biodiversity that they shelter. Now, however, the researchers have given us clear guidance on how we can stay ahead of ROD and prevent its spread to the rest of the state. I request you to direct the FWS and NPS to provide the additional personnel and resources that will be necessary to protect our ‘ohi‘a. 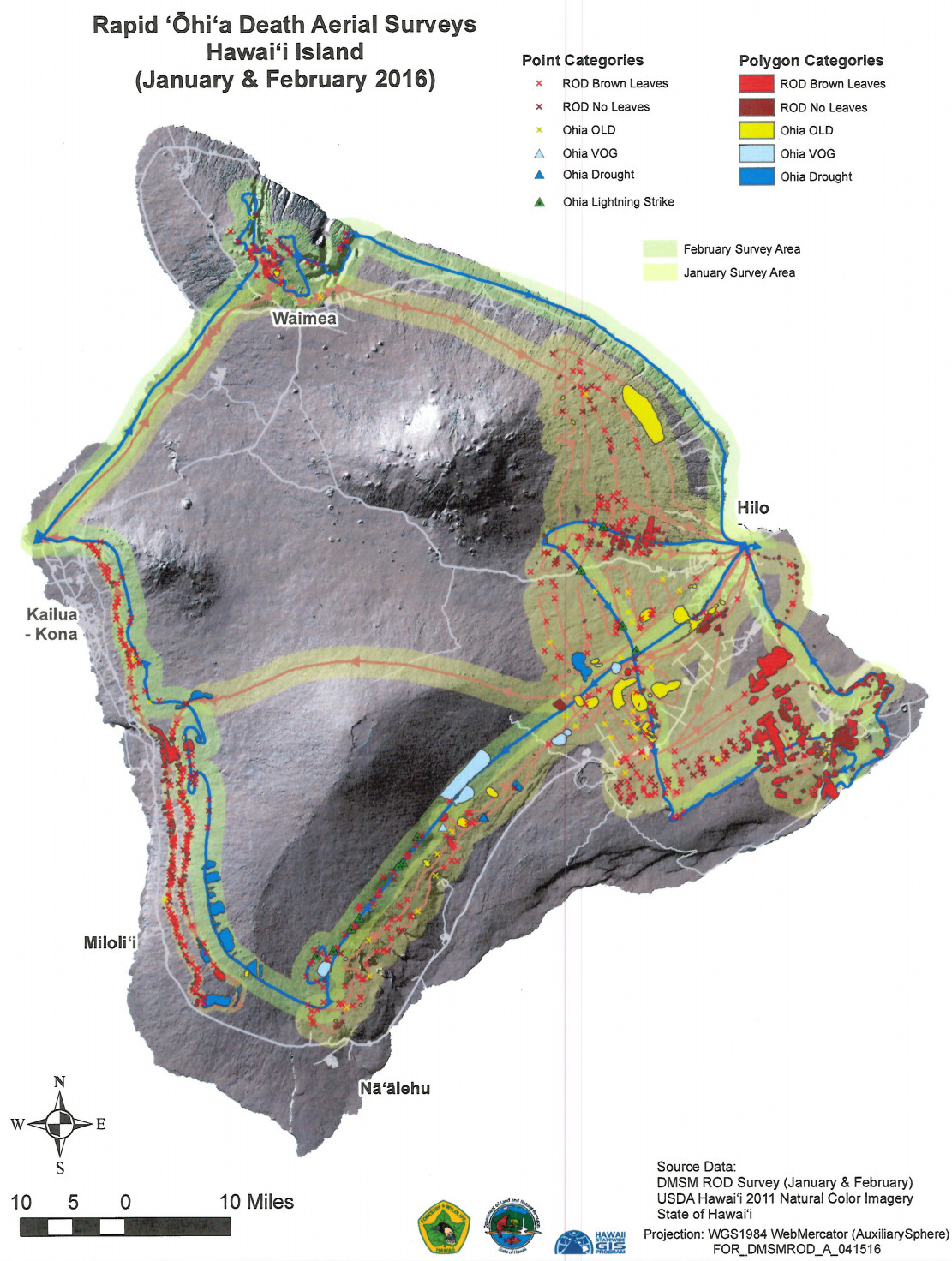 Schatz also reports that when the Senate passed the agriculture appropriations bill for fiscal year 2017, the legislation included a provision that he introduced that would direct the USDA to study reported recent outbreaks of Rapid Ohia Death in Hawai‘i and report recommended action for response and management within 90 days.